There will be no atoning from the gang of crooks

Sarah Lazare‏ @sarahlazare 8h8 hours ago
US-Saudi crimes are now a p.r. liability for former Obama aides, from Samantha Power to Ben Rhodes. But when will they publicly atone? My latest: http://inthesetimes.com/article/21522/saudi-arabia-obama-ben-rhodes-samantha-power-jamal-khashoggi-yemen-war … 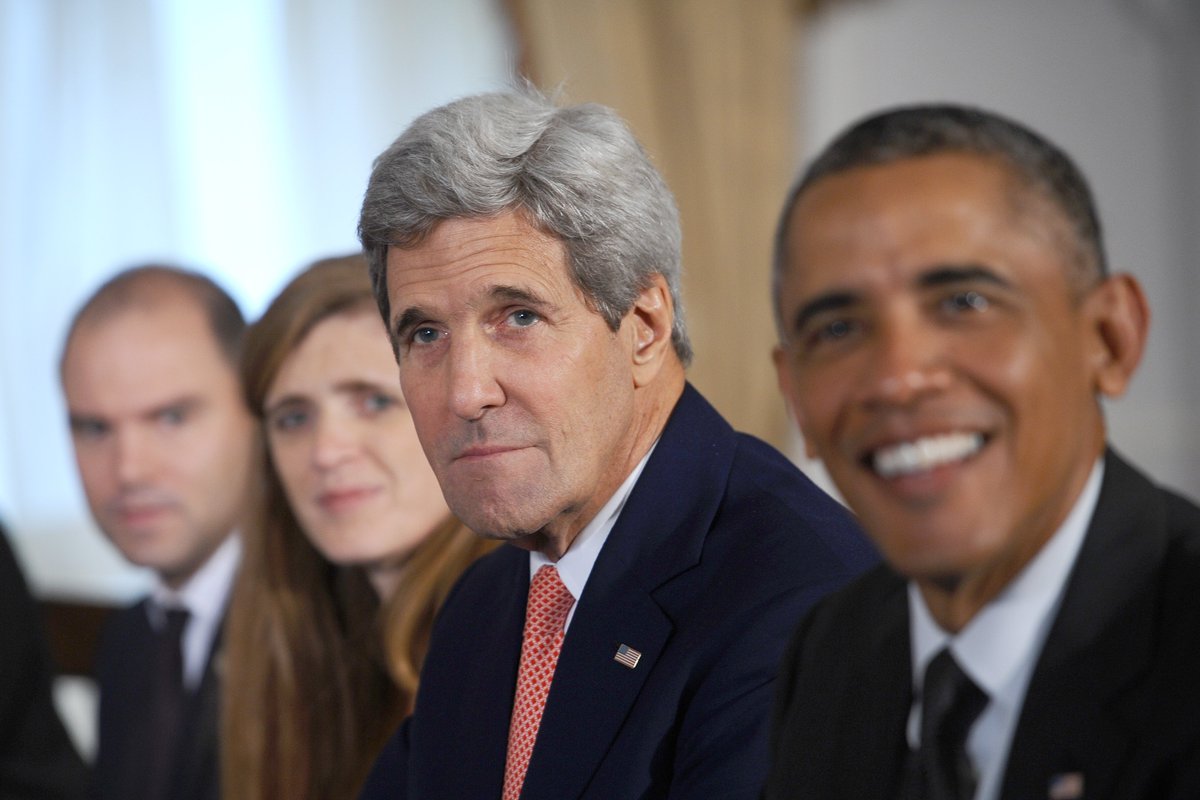 Publicly atone?  That group's not going to atone for anything.

John Kerry?  He'll apologize for his anti-war stance in the early seventies before he'll apologize for being a war monger.  Samantha Power generally ignores any topic that would implicate her.  Barack tends to hector anyone who dares question the myth of St. Barack.  As for Ben Rhodes, he's just human filth who would have been destroyed long ago were it not for his brother.

Not one of them will atone or own up to what they have done.

"TV: No cookie for THE ROOKIE" (Ava and C.I., THE THIRD ESTATE SUNDAY REVIEW):
Many, many years ago Nathan Fillion and a sub-strata of womanhood entered into a devil's bargain that continues to this year: When they fawn over him, he won't marvel over the fact that, despite being homely, they somehow married and they'll pretend that he's not a mincing queen.  ABC's THE ROOKIE is the latest product of that bargain and it's just as painful as everything that's come before.

That may be the best opening paragraph they've done.  :D

Monday, October 22, 2018.  The Maddowists in the US press work overtime to hide the Women's March on the Pentagon (Amy Goodman, we see you) while the corrupt Hoshyar Zebari is floated as a member of the Iraqi government's new Cabinet and the PUK takes another nose dive in the elections.

At THIRD, we covered the march with "Editorial: What can you do?" and quote Green Party presidential nominee in 2012 and 2016 Jill Stein stating:

Maddowism and its creeping across the entire media landscape.


Forget the MSM, it's also the beggar media that constantly begs for our money to stay on the air but can't be bothered with broadcasting news that matters and inspires and could encourage real growth.
DEMOCRACY NOW! can't be bothered covering the Women's March on the Pentagon with even a headline.  On Sunday, KPFK's always laughable Nagwa Ibrahim used the hour of MIDDLE EAST IN FOCUS to discuss . . . GITMO which, for the record, is Cuba which, pay attention, Nagwa, is not part of the Middle East.  KPFA's increasingly Maddowed evening news on Sunday did recognize peace efforts . . . from the Vietnam-era.  In the best sense of consumerism, they used over five minutes of the newscast to urge everyone to spend, spend this coming Friday to see a documentary from over forty years ago THE WAR COMES HOME.  They didn't do a damn thing to note the wars going on today.  They didn't do a damn thing to note the Women's March on the Pentagon.  But, hey, the worthless director of the forgotten film did claim credit for all that 'resistance' going on today.  What a proud moment for everyone.

The action was not just about the march in DC.  There were satellite actions throughout the country as well as a few out of the country.


Why the march?  Many reasons.  Including:

DC DIRECT ACTION NEWS reports, "The 21st of October featured Cindy Sheehan’s Women’s March on the Pentagon. Protesters assembled outside the Pentagon City shopping mall, and set off chanting “out of the shopping malls and into the streets.” The march wound under the highway and through the streets around the Pentagon before finally ending in one of the Pentagon parking lots."


Great day out at the Women's March on The Pentagon. Both @4aPeoplesParty + @GreenPartyUS were well represented. Why? Both are all about peace. Major parties? They are both pro-war so why would they attend. #DemExit My family about to listen to some peace speakers.

Marilyn Kaplan‏ @MarilynKaplan1 12h12 hours ago
Cindy Sheehan and the Women’s March on the Pentagon: A Movement, Not Just a Protest
0 replies0 retweets0 likes

VFP of Western PA‏ @PghVFP 14h14 hours ago
We were in D.C today for the Women's March on the Pentagon! Thanks so much to Cindy Sheehan for organizing

CODEPINK Cleveland‏ @CodePinkCLEVE 17h17 hours ago
Ann Wright and Veterans For Peace with Cindy Sheehan at the Women’s March on the Pentagon #EndWar #DivestFromWar facebook.com/leslie.harris.… facebook.com/35573930122466…

In Iraq, the war and occupation continue.  And the hopes that a new prime minister might mean change diminish with each passing day.  As we noted Saturday, Iraq's new president Barham Salih declared that addressing government corruption would be the number one priority of the new government.  And we've heard over and over that this new government must be made up of technocrats not quotas as they've done in the past.


Sacked for corruption.. Nominated for Finance Minister!! Zebari was sacked by Parliament over ‘corruption’ in 2016, allowing him to return to AdilAbdAlMahdi’s cabinet in 2018 is a disgraceful undermining of the Parliament! #Iraq #IraqiLeaks

🇮🇶Iraq Live Update‏ @IraqLiveUpdate Oct 21
Sacked for corruption.. Nominated for Finance Minister!! Zebari was sacked by Parliament over ‘corruption’ in 2016, allowing him to return to @AdilAbdAlMahdi’s cabinet in 2018 is a disgraceful undermining of the Parliament! #Iraq #IraqiLeaks pic.twitter.com/1f2Zt5zf7S
2 replies10 retweets21 likes

al-Mahdi is prime minister-designate, says he will have his Cabinet ready to be nominated to Parliament in two days and also that corruption will be addressed but plans to nominate Hillary Clinton's close friend Hoshyar Zebari who was kicked out of his post for corruption.  And let's be really clear that it's almost impossible to be forced out due to corruption.  Zebari's one of the few who ever has been.  But now there's talk of putting him in the Cabinet?

And you expect to be seen as serious about confronting corruption?

Let's move over to the KRG.  Sunday, we called out the stupidity of media outlets like AFP who insisted, "The dominant party in Iraq’s Kurdistan has secured the most seats in the autonomous region’s Parliament, despite its leader Massoud Barzani having championed an ill-fated independence referendum last year, the local electoral commission said Sunday."

The stupidity in that statement is amazing.  The Kurds are the largest group on the globe without a homeland.  They are persecuted in Turkey and elsewhere.  The dream of a homeland did not start this decade or this century.  It's a long held dream.

Now the US government did not want the Kurds to hold that non-binding referendum.  So the knee jerk reactionary position of the press was to attack the referendum.  Never should a free press be independent, apparently.

But the Kurdish history is long and they've been attacked repeatedly over the years so Baghdad's little stunts following the referral didn't hurt the Kurds, not long term.  It did help bind them together.  Yet again, it was them against the outside world.

A year later, the Kurds in the KRG vote and, no surprise at all, Barzani's party is the big winner.  XINHUA reported Saturday:

The Kurdistan Democratic Party (KDP) has won the most seats in the Sept. 30 parliamentary elections of the semi-autonomous region of Kurdistan in northern Iraq.
Around midnight Saturday, the Kurdish Independent High Electoral and Referendum Commission (IHERC) announced the final results, which showed the KDP, headed by Masoud Barzani, took the lead with 45 seats of the 111-seat regional parliament.

Barzani's KDP won over twice the number of seats that the Talabani's PUK won.

For one thing, the Talabani family deprived Iraq of a president for over 18 months.  Jalal Fat Ass Talabani had a stroke and his in Germany for 18 months because he could not speak or move.  The Talabanis laughably posed him for photos -- a la WEEKEND AT BERNIE'S -- and they're seen as corrupt and liars for that.

There's also Jalal's infamous statement -- ignored by the western press -- that an independent Kurdistan was just a dream.

Fat Ass Talabani is dead.  Thankfully.  Last year, his two sons worked overtime to stop the referendum (and failed).  The Talabanis also called for the peshmerga to stand down in Kirkuk.  These are not minor issues to Kurds.

The Talabanis -- like AFP and so many others -- are out of touch with the Kurds.

Excuse me, the Tlabanis are apparently smarter than AFP or Joel Wing, they can learn.  Bafel Talabani gives lip service to independence for Kurdistan in today's interview with ALJAZEERA for example.  He's at least smart enough to grasp how out of step the PUK is currently with the Kurds they would supposedly like to represent.