Corruption in Congress?  Speaker of the House Nancy Pelosi is all for it.  Sam Broadey (THE DAILY BEAST) notes

For months, a broad swath of lawmakers—Democrats and Republicans—had been pushing various proposals to reform congressional stock trading rules, in response to growing public outrage over a string of stories showing potential conflicts of interest in lawmakers’ trades.

That push had picked up serious momentum in the House and Senate. Pelosi, along with a number of other top lawmakers, didn’t exactly embrace it. But given the overwhelming public support for a ban on lawmaker stock trading, she likely knew she couldn’t entirely dismiss it, either.

So, when Pelosi left her press conference, she somewhat miraculously got the headlines she wanted: a number of news outlets reported that the speaker had “shifted her stance” on the issue, or that legislation was “moving.”

In reality, the closest thing to an endorsement that Pelosi offered was this tepid statement: “If that’s what members want to do, then that’s what we will do.”

The task, the Speaker said, was to “build consensus.”

Six months later, not much has changed.

Gee, why could that be?  It's not as though Nancy has anyone in her family who profits from insider trading, right?  Pair that with this from BUSINESS INSIDER:

House Speaker Nancy Pelosi on Thursday denied that her husband made stock trades based on any information she's given him.

"Absolutely not," Pelosi, a Democrat from California, said at a press conference after a reporter asked whether her husband, Paul Pelosi, had ever invested in stocks using "information he had received from you."

Pelosi's husband is a successful venture capitalist and serial investor. Since 2021, Insider found that he's made tens of millions of dollars in stock and stock option trades together involving 19 companies.

The speaker reported in July that her husband recently exercised 200 call options, or 20,000 shares, of NVIDIA worth between $1 million and $5 million.

NVIDIA is a producer of high-end graphics processing units, and the investment has drawn criticism for coming directly before the Senate is set to vote on a $52 billion bill to bolster computer chip manufacturing in the United States.

The trades also come at a time when members of Congress are debating whether federal lawmakers and their spouses should even be allowed to trade individual stocks.

When asked in December 2021 how she felt about a possible ban, she said "We are a free-market economy. They should be able to participate in that." After intense blowback from the public and her colleagues, Pelosi ultimately acquiesced on a possible ban, saying, "If members want to do that, I'm okay with that."

Do you believe her?  I don't.  I don't think any rational person does.

Thursday, July 21, 2022.  An attack in Kurdistan finally leads to real revulsion over the actions the Turkish government has been carrying out for some time now.

There's not a week that goes by that the Turkish government isn't killing someone in the Kurdistan (northern Iraq).  They've set up military bases there, they use War Planes and drones to bomb the area, they've cut down trees in the area -- all of this in violation of Iraq's national sovereignty.

Except for Jeremy Corbyn, no non-Iraqi politician has seemed very concerned with this behavior.  Today, that may finally be changing.

Videos from the scene of the attack showed a summertime idyll destroyed. Shortly before the strike, families had been gathered by a pool, taking a dip or resting in the dappled shade.

When the shelling began, screams filled the air beneath a canopy of vines. Parents grabbed their children and ran.

Turkey has been conducting military operations against militants from the Kurdistan Workers’ Party, or PKK, in Iraq’s northern mountains for years. The group has fought a decades-long war for autonomy for Turkey’s ethnic Kurdish minority -- but civilian casualties on this scale are believed to be rare.

Rare?  Most attacks result in the Turkish government announcing they killed X number of terrorists and when Iraqi media reports that this was a farmer or these were children or whatever, the western media ignores it.  Over and over.  "Terrorist" is used to describe any Kurd or Yezidi and Turkey is allowed to carry out a genocide not unlike the one they did in the 20th century when they went after the Armenians.

The US State Dept issued the following:

The United States condemns the attack earlier today in the Dohuk province of Iraq, which killed and injured civilians. The killing of civilians is unacceptable, and all states must respect their obligations under international law, including the protection of civilians. We extend our condolences to the families of those killed and our sympathies to those injured. We maintain our strong support for Iraq’s sovereignty and its security, stability, and prosperity, including that of the Iraqi Kurdistan Region.

The United Kingdom released a statement as well:

Foreign Office statement on the attack in Duhok

The UK is seriously concerned by the reports of civilian casualties resulting from an attack in Zakho district of Duhok on 20 July.

We offer our deepest condolences to those affected and express our support for the Iraqi authorities in their investigations.

The UK deplores the loss of life and will continue to support the stability of Iraq including the Kurdistan Region of Iraq.

Witnesses to the attack who were taken to the hospital roamed its halls frantically, many barefoot, searching for family and friends. They described traumatic scenes at the bombing site.

“It was chaos ­— tourists’ hands and legs were detached from their bodies,” said Ahmad Tahseen Ali, 30, from Babil Province, who said he was standing about 20 meters from one of the strikes, which wounded his brother and sister, Ban al-Humnrani, 42, who is a U.S. citizen and was visiting from Sacramento, Calif. “We are used to hearing sounds of war, but I have never seen a horrific scene like this,” said Ms. al-Humnrani, who suffered a leg wound.

And the Iraqi government's response?  PRESS TV notes that today has been declared "a day of national  mourning."  IRAQI NEWS adds, "The Iraqi Prime Minister, Mustafa Al-Kadhimi, chaired on Wednesday an emergency meeting of the Ministerial Council for National Security, and directed to submit an urgent complaint to the UN Security Council regarding the Turkish bombing of Dohuk governorate, according to the Iraqi News Agency (INA)." THE TIMES HUB notes, "Iraq withdrew its ambassador to Turkey for consultations." And Ahmed Maher (THE NATIONAL) reports:

Iraq has demanded that Turkey withdraw its troops from the country and stopped plans to appoint an ambassador in Ankara, accusing the Turkish army of a deadly artillery attack on a popular tourist destination in the country’s north.

“Turkey has disregarded the Iraqi demands to stop the violations against our sovereignty and the security of our citizens, and to respect the principle of good neighbourliness,” Iraq’s National Security Council said.

"We ask Turkey to offer an official apology and withdraw its military troops from all Iraqi territories."

The deaths in a village pleasure garden prompted several dozen angry demonstrators to protest outside the Turkish visa office in Baghdad early Thursday, despite a heavy police presence.

Loudspeakers blared out patriotic songs as protesters chanted slogans demanding the expulsion of the Turkish ambassador, an AFP journalist reported.

"We want to burn down the embassy. The ambassador must be expelled," said demonstrator Ali Yassin, 53. "Our government is doing nothing."

There were similar protests on Wednesday night in the Shiite shrine cities of Najaf and Karbala and in the southern city of Nasiriyah.

Protestors in Khanaqin step on the Turkish flag and burn it, in reaction to the Turkish shelling in Zakho which killed & injured 35 Iraqi tourists yesterday. #Kurdistan #Khanagin #Turkey #TwitterKurds 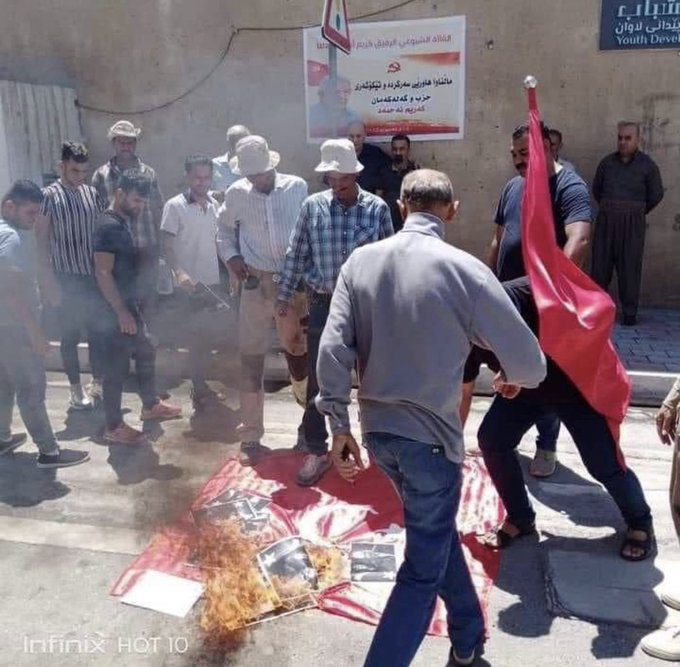 National mourning has been declared in #Iraq after #Turkey attacked holidaymakers in Zaxo/southern #kurdistan. The bodies of the nine victims are transferred from Hewlêr to Baghdad. Investigations have clearly established Turkey's responsibility.

As is always the case when one of the murders its carried out gets some attention from the press, the Turkish government is denying that they launched the attack.

The continued fighting between Turkey and the Kurdistan Workers’ Party (PKK) on the Kurdistan Region’s borders is completely “unacceptable”, the Region's President Nechirvan Barzani said Wednesday following the Turkish attack that killed and injured dozens in Zakho.

“The repeated bombings and continued fighting between the Turkish army and PKK fighters on the borders has been completely rejected and unacceptable,” the President said, adding that such attacks harm the security and stability of the Kurdistan Region.

President Barzani further urged for an end to the aggressions on the Kurdistan Region’s borders and called on the Iraqi federal government to prevent such tragedies from reoccurring.

The Kurdistan Regional Government (KRG) also condemned the Turkish bombardment in Zakho and said that Iraq and the international community must do their part in ensuring that such attacks will not be repeated, describing the Turkey-PKK confrontations as “a source of threat and a permanent danger to the lives of citizens.” 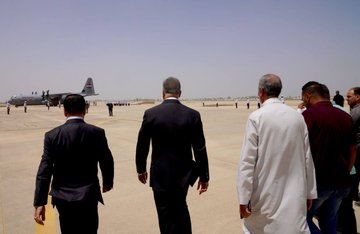 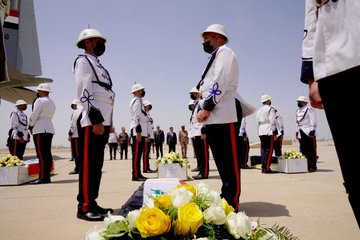 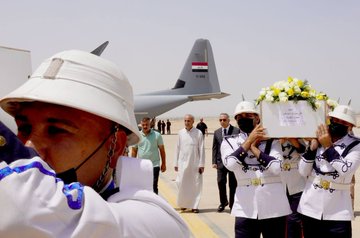 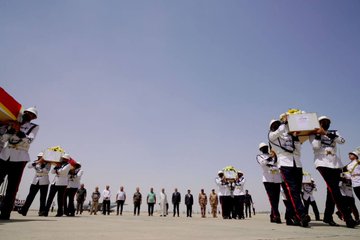 National mourning has been declared in #Iraq after #Turkey attacked holidaymakers in Zaxo/southern #kurdistan. The bodies of the nine victims are transferred from Hewlêr to Baghdad. Investigations have clearly established Turkey's responsibility.

Mustafa has made comments as well.  CGTN notes:

"Turkish forces have perpetrated once more a flagrant violation of Iraqi sovereignty," he said on Twitter, condemning the harm caused to "the life and security of Iraqi citizens" and reserving Iraq's right to retaliate.

"Turkish forces have perpetrated once more a flagrant violation of Iraqi sovereignty," Kadhimi said, condemning the harm caused to "the life and security of Iraqi citizens."

"Iraq reserves the right to retaliate against these aggressions and take all necessary measures to protect our people," Kadhimi added.

And KURDISTAN 24 notes the response from Iraq's National Security Council:

“We strongly condemn the Turkish attack that targeted tourists in a resort site in Duhok province, leading to human casualties,” read a statement published by the Iraqi National Security Council. “We call on Turkey to stop the violations and, as a neighbor, respect Iraq’s territorial sovereignty and its people’s safety.”

“Turkey must make an official apology to Iraq and withdraw all its military forces from Iraqi territory,” the statement added.

“The Iraqi Foreign Ministry will urgently submit a lawsuit to the United Nations Security Council against the Turkish attacks on Iraq’s territorial sovereignty.”

The statement also said that the Iraqi Ministry of Foreign Affairs will summon Turkey’s ambassador to Iraq.