A song that's been stuck in my head for about four days.

"The End The End" is a song written by Debbie Harry, Kato Khandwala and Ben Phillips from Blondie's PANIC OF GIRLS album (2011).  Blondie hasn't done a greatest hits or best of since 2014 and they haven't done a remix album since 1995.

When they next do one of either, they need to include "The End The End."  It's a great song.  It needs a wider audience.

I love Blondie.  They still do amazing work.  They remain a pivotal band to this day.  They are pioneers and they have a glorious past as well as a dazzeling present.

Strummer‏ @Strumme05551372 3h3 hours ago
Lou Reed with his wife Sylvia, Iggy Pop, Debbie Harry, and Chris Stein during a 1982 party for Blondie's book, Making Tracks: The Rise of Blondie. 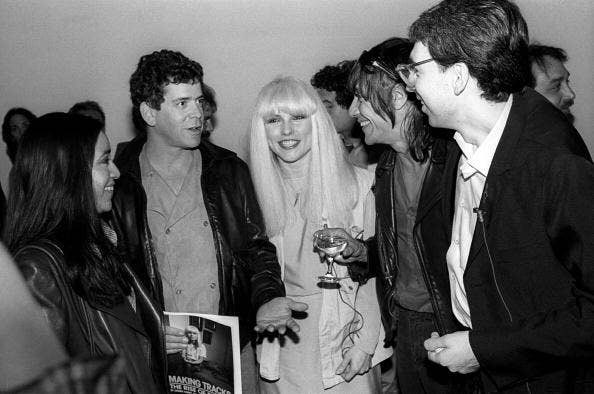 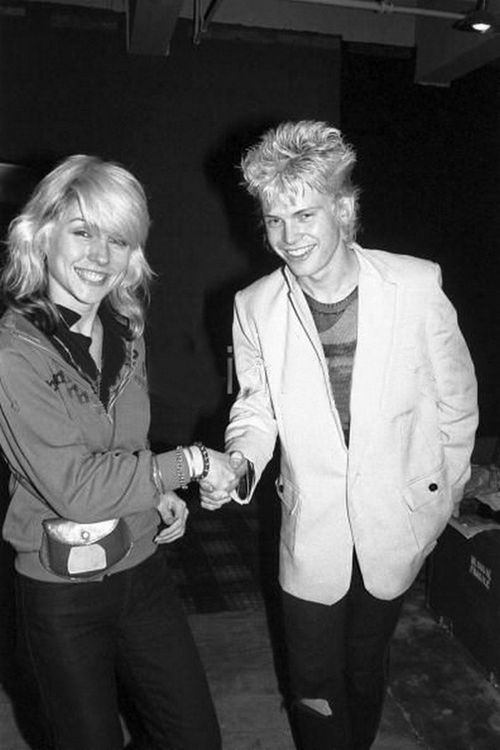 Their most recent studio album came out in 2017, POLLINATOR.  A great song from that album that you may have missed is "Love Level."

Link in title of book goes to my review, FYI.  I love FACE IT.

Friday, January 17, 2020.  Bernie Sanders rises as Joe Biden's campaign might sink from all of Joe's lies, in Iraqis in Baghdad continue protesting today, and more.


Starting in the US where the race for the Democratic Party's presidential nomination continues.

Hunter Biden is only one of War Hawk Joe Biden's many problems.  He's got his drug addict niece who practiced identity theft and walked away without any real punishment.  Then you've got the brother of Joe who is a nightmare all on his own.  Lucien Bruggeman (ABC NEWS) reports:

In 2009, the year Joe Biden took office as vice president, a local business executive met the politician’s younger brother, Frank, at a Starbucks in Palm Beach Gardens, Florida, and later asked him to become the president and front man for a fledgling charter school venture.
Frank Biden, a longtime real estate developer in the state, accepted the offer, and over the years, he touted his famous last name and prominent connections in Washington to help land the company a series of charter contracts from local officials in Florida to open charter schools, earning hundreds of thousands of dollars over a five-year period from the company in the process.
In media interviews at the time, Frank Biden was unabashed – calling his last name “a tremendous asset” because of the family’s record of “taking care of people who need help,” and telling people it brought him “automatic acceptance” as he sought government approvals for the for-profit Mavericks in Education.
Claims of mismanagement would ultimately bog down many of those schools, which focused on educating at-risk teens with troubled backgrounds. In at least two separate lawsuits, Mavericks schools faced allegations of inflating enrollment as part of a scheme to garner more government funding. The charters were eventually sold and the schools reorganized under new management.
Critics suggest that when Frank Biden touted his family name to promote the Mavericks’ charter schools, it was just one example of the Biden family actively benefiting from sharing a name with the vice president. Now it could pose challenges for the former VP as he seeks the Democratic Party nomination for president, even when Joe Biden has not been accused of any wrongdoing.
[. . .]
The presidential candidate has also faced questions about endeavors by another brother, James Biden, who is fighting a lawsuit in which he stands accused of feigning interest in investing in a medical device company as a ploy to steal the company's business model.
According to plaintiffs, James Biden said during investment negotiations that the firm’s “psychiatric care model would be used by Joe Biden as part of his campaign for President of United States.” A spokesperson for James Biden called allegations in the lawsuit “a seriously misleading version of the events,” meant to “[take] advantage of Jim Biden’s public profile as the brother of a presidential candidate,” adding that “[Frank Biden] does not, and has never, discussed his business ventures with his brother.” The lawsuit remains ongoing.

Joe and his family have huge ethical issues.


A half-wit response to that has developed -- one that argues, "Trump does it too!" or "It's not yet as bad as Trump!"

Those are the rallying cries that will get voters to turn out in November?

Those sort of responses didn't help Hillary Clinton make it into the White House.  Equally true, if that's the best the Democratic Party can offer -- a candidate who's like Donald Trump or just slightly better, the party may be beyond help.


War Hawk Joe has told a series of lies about himself regarding the Iraq War and often gotten away with lying.  Sam Husseini (SALON) observes:


It's remarkable how little scrutiny Biden has gotten for his role in the Iraq invasion. Sanders has mostly criticized Biden's vote, but beyond that, Biden was chair of the Senate Foreign Relations Committee. He has been criticized by leading analysts and weapons inspectors for the hearings he presided over that led to war.
Rep. Tulsi Gabbard, viewed by many as an antiwar candidate, has outright let Biden off the hook. At a debate last year, Gabbard said of Biden: "He was wrong — he said he was wrong."
Thus, Biden may be positioned to become the Democratic nominee — and face Trump in the general election — with minimal scrutiny for his major role in the worst policy decision of our lifetimes. He's also in a worse position to take on Trump's phony "America First" isolationism than Hillary Clinton was in 2016.


Joe lies over and over about his Iraq War record.  But, sad for Joe, all anyone has to ever say is, "Let's go to video."

Here's Joe Biden in 2003 at Brookings admonishing the Democrats who didn't support the Iraq War like he did. #JoeVotedForTheWar

David Sirota Retweeted Bo Erickson CBS
THIS IS UTTERLY INSANE ON EVERY LEVEL: Biden, 2003: "Let everyone here be absolutely clear: I supported the resolution to go to war." cnn.com/2019/09/04/pol… Kerry, today: "The vote was not a vote specifically to got to war."
David Sirota added,

The United States treated 11 of its troops for symptoms of concussion after an Iranian missile attack on an Iraqi base where U.S. forces were stationed, the U.S. military said on Thursday, after initially saying no service members were hurt.

Hmm.  Imagine that.  After the propaganda on behalf of the Iranian government issued by Medea Benjamin and others in the circle jerk, US troops were in fact injured.  Our position calling out the nonsense from a tiny segment of Americans that Iran had acted so wonderfully because it had done a precise strike blah blah blah?  We were right before this news item popped up.

We were right because, on the left, our argument is there are no 'smart' weapons.  But some of us -- a tiny segment -- ignore basic reality to popularize the Iranian regime.  They can't seem to stop doing that.  Margaret Kimberley was telling the world (a) Iran didn't shoot down the plane and (b) the British ambassador to Iran was somehow inflating/creating protests in Iran.  On the first, she was forced to admit she was wrong.  On the second, she's just moved to a different focus to pretend like she wasn't issuing propaganda for the Iranian government.

The protests are widespread in Iran against their governments move.  But that didn't fit with the propaganda that Margaret and others were peddling so they try to look the other way and just hope this will blow over.

I don't care for the Iranian government.  That doesn't mean I advocate for war on Iran.  This duality thinking does real harm to the world.  We live beyond an either/or realm and we have many choices.  Most of all, we can support the people of any country (even Americans in the US) without supporting their leaders.

The Margarets and the Aarons and the Medeas and the Michales and the Maxes have told us so much that, it turns out, has not happened.  They're good at creating hysteria, they just don't seem very good at nailing down facts.

Or supporting the people -- as opposed to the government of Iran.  They have no interest in the Iraqi people, of course.  By their own actions, they've made the very clear.

ALSUMARIA TV reports that protesters are streaming into Baghdad and doing so today, for the third month in a row, despite increased efforts to prevent them from gathering.

It'll be interesting to see how much coverage the protests today get in light of last week's response.


Last Friday saw the assassinations of Iraqi journalists Ahmed Abdul Samad and Safaa Ghali's  for the 'crime' of reporting on the protests.  The Margaret Nutso Crowd had plenty of time to propagandize for a terrorist and for a regime but no time to note the murders of these two journalists.

CFI & international press freedom organisations call upon the prime minister of #Iraq, Mr. Adil Abdul-Mahdi, and the Council of Representatives to secure the investigation of the killings of Iraqi journalists Ahmed Abdul Samad and Safaa Ghali in Basra

They were killed for covering the ongoing protests.  Yet, in the US, some can't even be bothered with reTweeting about the protests, let alone writing anything about this brave move by the Iraqi people.

Those who do not know the #protests or even afraid of them, they should recognize thir peacefulness under one flag, with the participation of women, and with many colors. #BaghdadPost #IraqProtests


Since October, protesters have been expressing frustration that the country's billions of dollars in oil revenues have been squandered, instead of providing jobs and reliable basic services, such as electricity, water, adequate health care and schooling. They have focused their ire on the systemic corruption that prevents these demands from being met.
Significantly, these protests in Baghdad and across the south of Iraq saw Shia Iraqis - who have been left behind by the economic system - revolt against their own elites.
Primarily, they were calling for an end to the entire post-2003 political system, but also for and end to foreign interference; both Iranian and American. The protests were more emblematic of a new Iraqi nationalism, led by a young generation who came of age after 2003.
Nonetheless, this rallying call threatened the legitimacy of pro-Iranian elements within the PMU, such as Kataib Hezbollah. Never had Iran's influence in Iraq been so precarious since the 2003 Iraq war. Adel Abdul Mahdi, the Iraqi prime minister - who Iran supported - resigned in the face of the angry protests and the burning of Iran's consulate in Najaf.
In response, Iranian affiliated PMU factions allegedly targeted the protesters, who for the most part are their Shia co-religionists. Katiab Hezbollah not only used force against these protesters, but organised a counter-protest at the American embassy.