John Stauber‏ @JohnStauber  9m9 minutes ago
John Stauber Retweeted TYFYS
America chews up, spits out its young in wars of Empire wrapped in the flag. Then it markets fawning dramas.

2:15
TYFYSVerified account @TYFYSMovie
For your courage, for your love, for your sacrifice. Watch the trailer for #ThankYouForYourServiceMovie now.
0 replies0 retweets1 like

That is exactly right.

Over the summer, when we were visiting C.I., we saw a movie.  Mike had promised our daughter that they would see Spider-Man.  She wanted us all to see it so a big group of us went -- Ava and Jess and their kid and Jim and Dona and their kid, etc.

The movie wasn't bad by any means.

But what I enjoyed most was Michael Keaton's character.

He's struggling to hang on with his company and then the NSA swoops his contract away from him.

You could relate to him.

He makes the point in the film that it is the youth (and working class) that are used as cannon fodder.

It brought a reality to the film -- and to the genre.  It's only the Captain America films that ever bring reality in -- until now.

Be sure to check out Ava and C.I.'s take on DYNASTY with "TV: A reboot done right." 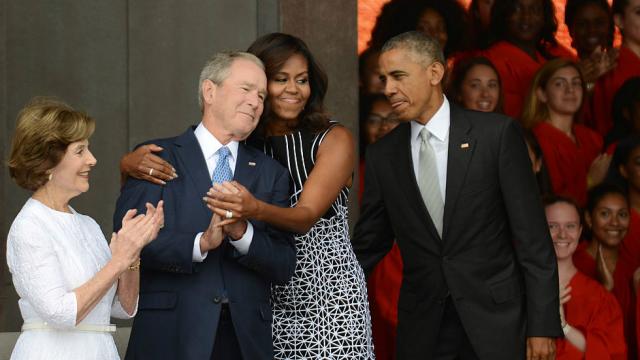 When you needed support from the world as you tried to leave your closet, the world responded with love.

You repaid them by bringing on a War Criminal like Bully Boy Bush, by using your talk show to normalize him.  Shame on you.

Iraq is ripped apart but you got to hee-haw and bray like a donkey seated next to Bully Boy Bush.

And so many others rush to do the same.

The inability of the Democratic Party to draw a line between right and wrong is part of the reason that more and more voters stay away from the polls.

The ongoing Iraq War is a crime.

And those who minimize it or 'set it aside' are accessories to the crime.


Take another selfie, Ellen, and consider it your mugshot.

And get a crowd around you of all the other sorry asses who sell out ethics and beliefs to grind up against War Criminal Bully Boy Bush.

Moving on to another fake ass, THE NEW YORK TIMES, the editorial board recently noticed that the country is engaged in never-ending wars.

Late to the party, as usual, the paper rushed in to advocate for a draft and so much more.  Bill Van Auken (WSWS) called them out:

“The idea that Americans could be inured to war and all its horrors is chilling,” the Times editors bemoan.
Who do they think they’re kidding? Does the newspaper’s editorial page editor James Bennet (a man with the closest ties to the US state, with a brother who is a right-wing Democratic senator from Colorado and a father who was a top State Department official who headed the Agency for International Development (AID), a frequent conduit for CIA operations) think that the Times’ readership is plagued by collective amnesia?
The “newspaper of record” has done everything in its power to “inure” the American public to war and, whenever possible, to conceal from it the real extent of its horrors—at least when the bloodshed is the handiwork of the Pentagon.
The Times editorial board has played a critical role in selling every US war of aggression for the past 25 years. Its most infamous role was played in the run-up to the invasion of Iraq in 2003, when its senior correspondent Judith Miller conspired with the government to promote and embellish upon the lies about “weapons of mass destruction,” and its ineffable foreign affairs columnist Thomas Friedman brazenly embraced a “war of choice,” justifying it in the name of democracy, human rights and oil. Once the Times got the war it sought, it systematically obscured its real human costs, which included the estimated loss of a million Iraqi lives.


Rivaling THE TIMES for most brazen, a column in THE WASHINGTON EXAMINER entitled "Iraq may have just turned the corner from chaos to stability."

They conned for so long that all they really have is the over used "turned corner."

The "turned corner" that's always led back to the same place.

You know things are bad in Iraq when the people who cheered the war on from the beginning start insisting "turned corner."


Because I think most of us are seeing chaos and, as Leon Panetta pointed out, looks like it's moving to the brink of civil war.

Iraq launches new offensives against KurdsThe battles come after a momentous ten days in Iraq that saw Iraqi Security Forces take over large swaths of territory as Peshmerga withdrew from Kirkuk and Sinjar. 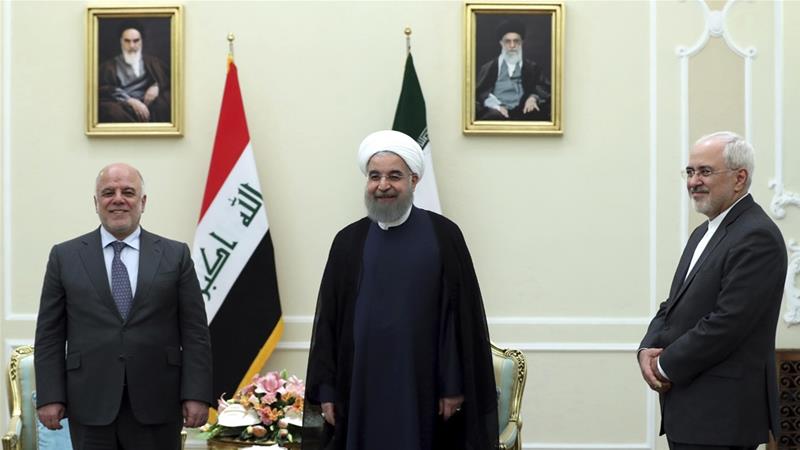 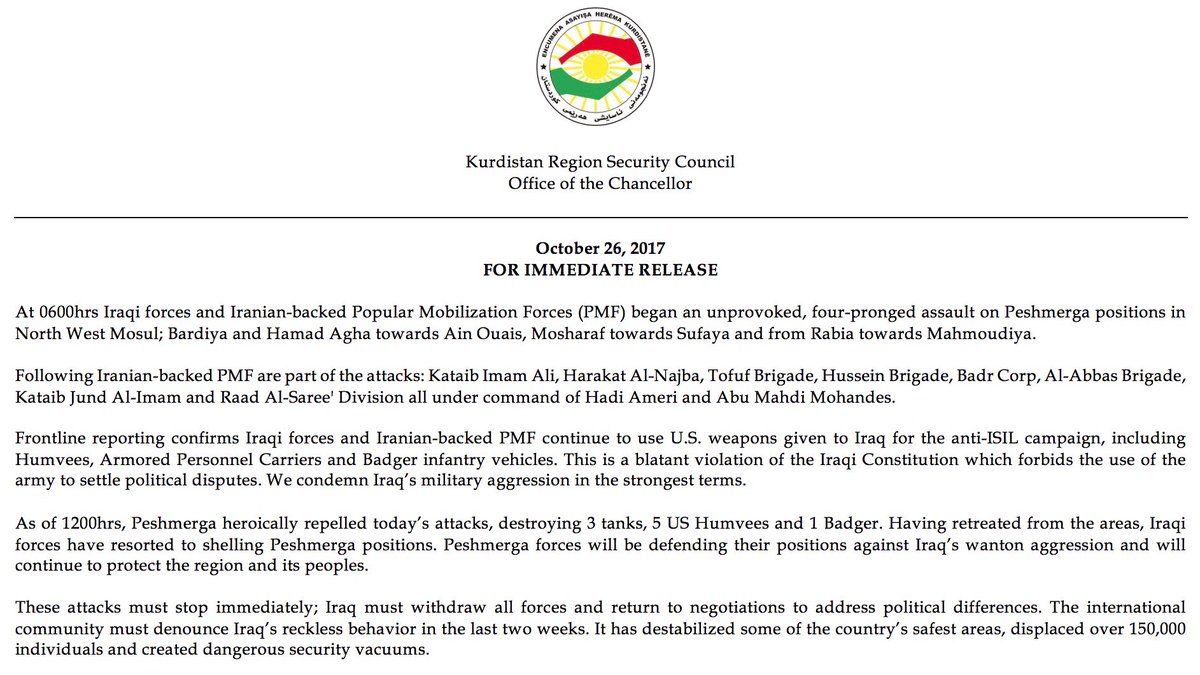 Replying to @KRSCPress
It has destabilized some of the country’s safest areas, displaced over 150,000 individuals and created dangerous security vacuums.
1 reply45 retweets81 likes

KR Security Council‏Verified account @KRSCPress  5h5 hours ago
Replying to @KRSCPress
This is a blatant violation of the Iraqi Constitution which forbids the use of the army to settle political disputes.
3 replies32 retweets50 likes


A neocon sees another 'turned corner' -- the rest of the world, not so much.

The KRG's envoy to the US Tweeted:

Rep. Trent Franks‏Verified account @RepTrentFranks  2h2 hours ago
It is unconscionable for the United States to continue standing idly by while Iranian proxies in Iraq assault our Kurdish allies.
59 replies216 retweets302 likes


20-year-old Alex Missildine was killed while serving in Iraq.  Yesterday's snapshot resulted in a few drive-bys insisting that Missildine's body had been returned and that any memorial took place then.

First, I applaud your brave courage and firm insistence that you are always right.  Were you not so sure of yourself, you might try to check something out first.

I didn't lie nor was I wrong.  (I can be wrong and often am, I wasn't this time.)  A memorial service was held for him yesterday at Robert E. Lee high school in Tyler, Texas -- as I stated in the snapshot.

There was no news coverage of it online so I didn't link to any.

How do I know about the memorial?

From East Texas community members, some of whom wrote a piece for HILDA'S MIX this week -- remember what Keesha says, "This is a private conversation in a public sphere" -- what you see at this website, is only one piece of a dialogue between a very large community.

For the drive-bys, this is from Louanna Campbell's piece published today by THE TYLER MORNING TELEGRAPH:

As the sun came up over Robert E. Lee High School on Wednesday, senior Karl Hall stood solemnly in the school's courtyard holding a wooden flag case made by one of his classmates.

He was joined by about 150 students and faculty in the cold morning air as they gathered to honor the service and sacrifice of Army Spc. Alexander Missildine, a 2015 Lee graduate who died earlier this month in the line of duty.
Jared Cockrum played taps on his trumpet as a detail of U.S. Army soldiers unfurled and folded a flag before Hall, who organized the short student-led memorial service. Hall then placed the flag case on top of the Army memorial wall at the bottom of the school's flag pole.
"Alex was a friend of mine," Cockrum said. "I met him when I was a freshman. He was my section leader in band. I wanted to show my thanks for his service and his family."


And here is KLTV -- Tyler's ABC affiliate -- reporting on the memorial service: