Will CDs go the way of cassette tapes?

I love music and have a huge vinyl collection and a huge CD collection.

My cassettes?  I actually gave them away.  When I switched to CDS -- I was late to switch over, it was probably 1993 or 1994 when I switched over.  I gave my cassettes to the wife of a friend.

Wasn't she my friend?

I'm not friends with liars.

I was over at their place two weekends after I'd given the tapes.  They were having a get together.  She was playing Prince.  A mutual friend said to her, "Wow, look at all these Prince tapes you have.  I didn't know you were into Prince."  She replied, "Oh, yes, I started collecting those in college."  I looked at her and just stared.  All of those tapes she had had for two weeks, I gave her all the Prince tapes.  Her musical tastes?  Jewel and "Who Will Save Your Soul."  There was no need to lie.  Might have also been nice to have recognized that I had gifted her with a ton of music.  Would have been the polite thing to do.  Anyway . . . (Yes, she will read this and she will complain to my friend.  Tough.  Every word's true.)

So these days, I pretty much just purchase streaming rights from AMAZON unless it's someone like Jack Johnson or Carly Simon or Stevie Wonder or Joni Mitchell or White Stripes -- where I want to continue my collection of discs.

So what I'm asking tonight is do you think CDs will go the way of cassette tapes?  Or will they hang around like vinyl has?

The reason I ask is our daughter (Mike and my daughter) loves to go through our music collection but she only wants to play the vinyl.

I noticed that again today when I got home from work and she was all ready to play some music.  She'd picked out two albums -- actually three.

Dionne Warwick's DIONNE! is two albums.  It's COLUMBIA RECORDS reissuing two SPECTER RECORDS as part of the COLUMBI RECORD CLUB ("EXCLUSIVE!" the cover boasts).  The two albums -- not labeled as such in this pacakge but on two different discs -- are Dionne's ANYONE WHO HAD A HEART from 1964 and 1963's PRESENTING DIONNE WARWICK.)  So she had that album and she'd also selected Dionne Warwick's THE WINDOWS OF THE WORLD.

Now we have Dionne on CD (including Dionne's latest SHE'S BACK which Kat rightly praised in her review). 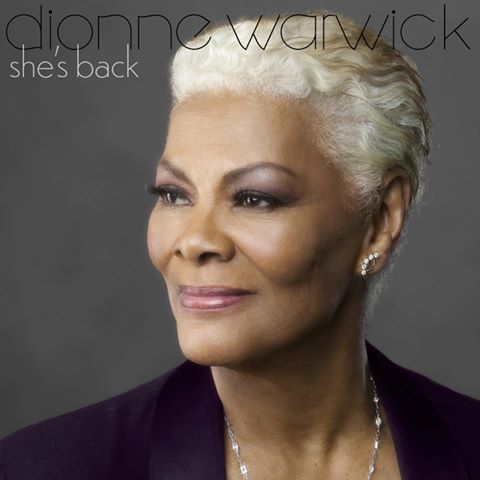 But our daughter always goes for the vinyl.

Is it because the vinyl cover is so much larger than a CD case?  Is it a cast of being able to see the cover art better?  I have no idea.  But she will grab vinyl time and again.

I should note that she doesn't play the vinyl herself.  As far as I'm concerned, she's old enough.  Howeer, Mike's father hasn't signed off with regards to his record collection (yes, that's a hint to do so before Christmas) so we've followed the same restriction her to avoid any problems when we visit for holidays.

I'm making a unilateral decision, she's going to be able to do it here.  She's old enough.  She should have her own record player.  After work tomorrow, I'm taking her shopping and we'll get her  a record player for her own room and we'll pick out some vinyl as well.

But back to my question, will CDs hang around or are they too sterile in sound for some?

Thursday, September 8, 2019.  Tulsi continues her vanity campaign, a man dies in Iraq because the US deported him (that's on us, let's stop pretending it's Donald Trump -- our Congress could've stopped him, our courts could have stopped him, this is our tragedy, our crime), and much more.

US House Rep Tulsi Gabbard continues her vanity campaign for the Democratic Party's presidential nomination. She'll never get the nomination and her continued 1% polling is an embarrassment.  As she continues her vanity campaign, more catch on that she's not anti-war.  As Kyle Anzalo observed this week on FOREIGN POLICY FOCUS "There's plenty of war that Tulsi is in support of."

We're so desperate for an anti-war figure that we're willing to applaud someone who'd continue The Drone War?  Tulsi is a fake.  Last week, as Kyle notes, she voted to condemn the Boycott, Divestment and Sanctions movement.  BDS attempts to do what the anti-apartheid movement did to South Africa.

So basically Tulsi's condemning Dusty Springfield.  Considering Tulsi's anti-LGBTQ past, that's not surprising.  Dusty, for those who don't know, didn't just sing "The Look Of Love," "Son Of A Preacher Man," "Wishin' and Hopin'," "You Don't Have To Say You Love Me" and countless other hits.  Dusty also stood up and was counted.

Do people not know this?  You won't find it in her CRAPAPEDIA entry -- no surprise there, sexism will always reign at CRAPAPAEDIA -- but Dusty stood up.  If this is news to you, you can stream a BBC report here about the 1964 tour in South Africa where Dusty refused to play to White only audiences.  She was a huge pop star and 25-years-old and when the South African government tried to force her to play to White only audiences, she pointed out that the contract she signed legally guaranteed mixed audiences.

The BDS movement needs support, not condemnation.  We discuss it when we speak to campus audiences.

I'm disgusted with Tulsi but she's a reactionary.  She's on the wrong side of history and she should pay for it.

I was part of the anti-apartheid movement -- a tiny part -- and was ridiculed for it by a number people when I was in college.  The campus paper waged a war on me when I countered the remarks of an idiot White person from South Africa who told the campus paper how wonderful life was for Blacks in South Africa.  For defending the rights of the persecuted, the campus paper attempted to ridicule me for months.  All it did was create sympathy for me and raise the issue more.  I still see those idiots from time to time today, pretending to be so left and liberal but we both know that they are racists to their core.  They only 'changed' because the times did.  If they had their way, they'd still support apartheid.

I can think of one woman who spearheaded the campaign -- and is a public person today -- and how she now pretends to be so lfet and so loving but she's not.  Not only was she in favor of apartheid back then, as late as the 90s she was marrying a known racist who she had to make promise not to use the N-word in front of the press.  There are a lot of fake asses out there.

People like her, they didn't grow, they were just shamed into silence and that's what appears to happen with Tulsi over and over.  She didn't really grow on the LGBTQ issue, she was shamed into silence.  If she'd grown, she'd have some story to share about it.  But she has none.  And blaming her beliefs on her father?  She's as ridiculous as Joe Biden.  Or did we all miss her tribute to homophobe father on Father's Day?

Tulsi needs to go.  She's not anti-war.  She's repeatedly on the wrong side of history and she never learns, she just retreats into silence.


Ali Abunimah Retweeted Tulsi Gabbard
Tulsi and others who voted for atrocious anti-Palestinian resolution HR 246 are feeling heat and that’s good. But this is a pathetic attempt to justify a wrong and indefensible vote that attacks and smears nonviolent BDS movement because “two-state solution something or other.”
Ali Abunimah added, 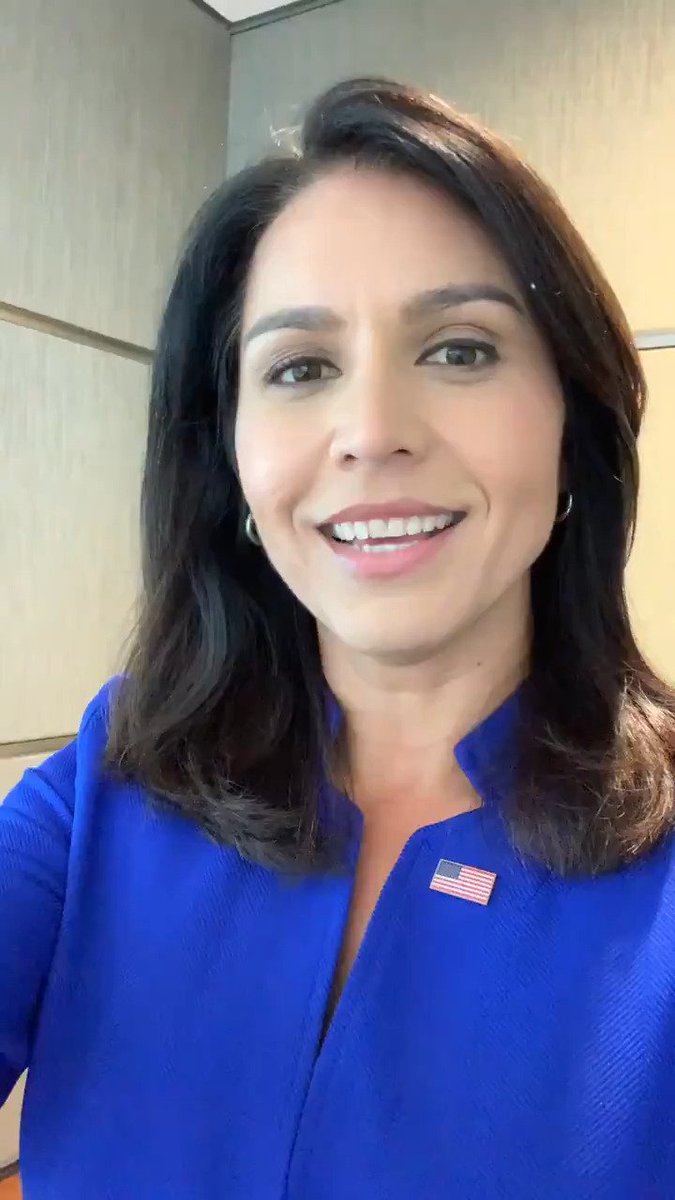 2:23
Tulsi GabbardVerified account @TulsiGabbard
Watch this for why I voted for HRes246 and why I'll always defend our right to free speech --> tulsi.to/hres246 #TULSI2020
51 replies321 retweets745 likes

The Humanist Report 🌹‏ @HumanistReport 8h8 hours ago
Replying to @DngrCarlosDngr @shawna_burley and
I've muted about 5 people who scold me whenever I dare to criticize—no matter how tepid said criticism is—our lord and savior, Tulsi Gabbard. You guys literally were rationalizing why BDS is bad after her vote. You lack the mental capacity to fight past that cognitive dissonance.
3 replies0 retweets1 like

Again, people are catching on to Tulsi.

Replying to @TulsiGabbard
twitter.com/TulsiGabbard/s… #Tulsi is pro-peace? #TulsiGabbard opposed H.Con.Res55 Rep.Jim McGovern’s (D-MA)resolution which directed the President to withdraw U.S.troops from Iraq/Syria who were deployed on or after August 7,2014 THAT'S WAGING PEACE? THINK! #Tulsi2020 #Tytlive #dems

amin ahmad‏ @Aminahmad41Amin 8h8 hours ago
If #Tulsi is Pro-peace HOWCOME #Tulsigabbard OPPOSED H.Amdt.1215 to H.R.5293 Rep. Jim McGovern’s(D-MA) amendment,which would have prohibited funds from being used for the engagement of U.S.Armed Forces in any combat operation in Iraq/Syria RECORD VS SPIN IS THAT'S WAGING PEACE?


Last week at the debates, Tulsi was an embarrassment.  Jay Inslee and Bill de Blasio tried to talk about the Iraq War and war on Iran, not Tulsi.

While I was in Congress, I cast many votes that I was proud of. I voted against and vocally opposed the Iraq War. And I know we cannot allow the Trump administration to thrust us into another disastrous war in the Middle East today. #GetToKnowJay
/>
26.5K views
0:21 / 1:02
10 replies56 retweets212 likes


Tulsi didn't want a serious conversation in the debates.  She wasn't the only one, the Sally Jessy of cable 'news,' Don Lemon, didn't want a real discussion either (see Ava and my "TV: Swindling the audience").

cottagelady‏ @Hammocknaps now
PLEASE READ. THIS IS HORRIBLE. "A 41-year-old diabetic man who grew up in Detroit died Tuesday after being deported to Iraq, the...
0 replies0 retweets0 likes

Unindicted Corq Conspirator‏ @rogue_corq 3m3 minutes ago
U.S. Deported a Detroit Man to Iraq, Where He’d Never Been and Didn’t Speak the Language. He Died on the Streets.
0 replies0 retweets0 likes

ICE deported a guy to Iraq who was not born there, never lived there, spoke no Arabic, and HAD TYPE 1 DIABETES. he died
437 replies12,341 retweets16,301 likes

Jimmy Aldaoud, a 41-year-old Detroit man who had spent most of his life in the U.S. and was deported to Iraq in June by the Trump admin, has died. The death appeared to be linked to the man's inability to obtain insulin in Baghdad to treat his diabetes. politico.com/story/2019/08/…
73 replies687 retweets666 likes

Waleed Shahid‏Verified account @_waleedshahid 11h11 hours ago
41-year old Jimmy Aldaoud was deported to Iraq by the Trump administration in June after living in the US ever since he was a child. He died on the streets of Iraq yesterday.
71 replies1,119 retweets1,800 likes