Some Tweets to catch 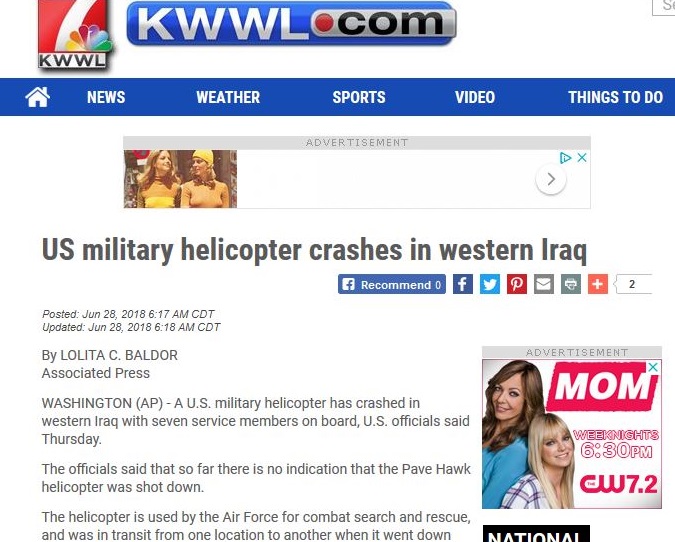 This AP report dated June 28, 2018 appears to be from March.  Apparently, there was no crash today.  My apologies.  Snapshot continues below as it appeared this morning.

Another helicopter crash in Iraq today.  Lolita C. Baldor (AP) reports that the US helicopter was carrying 7 service members and that "The helicopter is used by the Air Force for combat search and rescue, and was in transit from one location to another when it went down Thursday afternoon near the town of Qaim in Anbar Province."

At this point, the fate of the seven service members is not known.

Maybe it'll serve as a reminder to a real ugly subfaction?

Somehow, in the immigration dialogue taking place, service members were brought up, specifically, their separation from their families.  In response, some really pompous and stupid voices sprang up saying they were children whose parents had gone to Iraq and it was not the same thing because their parents returned.

How entitled and self-obsessed do you have to be?

Not every parent returned.

And while you may have hoped your parent would return, when someone ships off to war there is always the possibility that they will not return.

The idiots advancing that nonsense did no one any favors.

But maybe their smug attitudes made it clear why they cannot take to the streets over the ongoing wars?  They don't see death as a possibility and they don't care about the deaths of the Iraqi people.

Good morning. Americans are still dying in Afghanistan and Iraq after 17 years of war, with no real end in sight, because nobody wants to "lose" the war. The Supreme Court is about to be absolute s**t. Mitch McConnell is an utter rat. Nothing matters. Eat @nihilist_arbys.

On the topic of dying, SPUTNIK notes, the US government has now admitted to "unintentionally killing 939 civilians since the start of the operations in Iraq and Syria" and that the "London-based NGO Airwars has estimated the US and its allies are responsible for at least 9,600 civilian deaths."


Staying with violence, the United Nation's has published their Annual Report of the Secretary-General on Children and Armed Conflict.  At least 717 children were killed in Iraq in 2017.  The report notes:


Over half of all incidents were the result of air strikes, shelling, sniper fire and rockets, resulting in 390 child casualties. Improvised explosive devices were the second leading cause (24 per cent), followed by targeted attacks on children (10 per cent), including three boys who were killed and two who were injured by unidentified parties for their alleged association with ISIL.

Screw you, Kurt.  You should be in prison for you actions with boys.  Thank goodness that at least THE NEW YORK TIMES fired your ass when they found out you were paying one of these boys.  The useless Anthony Kennedy is retiring.  A right-winger.  And it's time to act really stupid apparently.  No one has to be confirmed to the Supreme Court.  The Democrats could block any nomination for a year or more.

That's today.  2010?  "First step toward blocking Garland nomination years later"?  He's so stupid.  And Garland was not a good nominee.  Whining about him?  Barack Obama should have nominated someone of substance.  Having decided to go with the corporatist Garland, it's on Barack.  He knew how to horse trade.  That's all he had to do.  But he didn't do that.  The failure of his nominee is on him.

Was Kurt trolling for young boys while he wrote that Tweet?  Who stayed home in 2001?  There wasn't a presidential election in 2001.  He may mean 2000.  Regardless, the Democrats own the Iraq War.  Not only because Barack Obama failed to end it, despite his promise to do so, they also own it because they voted for it.  Every Democratic Party presidential ticket since the start of the Iraq War has contained at least one person who voted for the Iraq War.

Kurt wants to spew and apparently couldn't find a photo of a young bow to aim his stub at so instead he tries to spew over the American people.

Kurt's big problem is that the American people didn't turn out for the Democratic Party.

Kurt needs professional help.  He is not healthy, obviously.  You don't hunt around online for young boys if you're healthy.  You don't fork over thousands of dollars to them and 'forget' to inform your employer when asked about your relationship.

The Democrats in Congress could have stood for the American people at any point.  They didn't.  Give people a reason to turn out and they will.  Give them empty words that you never fight for and why should they bother?

Where is Medicare for all?  Where is the forgiveness of student debt?  Where are any of the things that Americans want?

These are the things that Alexandria Ocasio-Cortez ran on, as Bruce A. Dixon (BLACK AGENDA REPORT) reminds:

Ocasio-Cortez campaigned on single payer health care and free college tuition. She denounced the latest massacre in Gaza. She says ICE ought to be abolished, and the day before the election she was at a South Texas immigrant detention center. She’s a young working class Puerto Rican woman who reportedly refused corporate cash and was working a real job, waiting tables at the beginning of her campaign.


On that platform, she won the primary this week.  Alistair Farrow (UK SOCIALIST WORKER) observes,  "The victory comes despite the Democratic Party repeatedly letting people down."

Whether she will win in November's general election (and whether, if she does, she will fight for what she believes) is not known at this point.  But what is clear?  That if you give people a reason to vote, they will show up.

Today is #PTSD Awareness Day. It's not only veterans who suffer from it, but regular people and journalists. For me, it started in Iraq after I covered a multiple suicide bombing. As the death and destruction piled up over the months, it got harder to function outside a war zone
40 replies499 retweets1,437 likes

Of the estimated 2.7 million American Iraq and Afghanistan war veterans, an estimated 20 percent have PTSD and/or depression and about half never seek treatment. In order to bring greater awareness to the issue, the US Senate designated June 27th as #NationalPTSDAwarenessDay.

The following community sites -- and a few non-community ones -- updated: