When funding for the US intelligence agencies, the Department of Homeland Security, federal aid to local police and various “black” operations are factored in, the budget for the United States “total army” amounts to over a trillion dollars, a figure larger than the gross domestic product of Indonesia, a country with a population of 261 million.
Just over one third of the Pentagon’s annual budget, or $265 billion, could end world hunger, according to figures from the Stockholm Peace Institute. Another third, or $239 billion, would provide primary and early secondary education for the entire world population.
Instead, these vast sums are squandered on building and deploying the tools of mass murder.
The budget includes provisions for Trump’s unprecedented and undemocratic military parade, which will involve the deployment of US troops on American streets. The spending bill authorizes “any kind of motorized vehicle, aviation platform, munition, operational military unit or operational military platform” to roll down the streets of Washington at the president’s discretion.
It likewise authorizes the continued operation of the Guantanamo Bay prison camp by extending “prohibitions on transfers of detainees into the United States”.
Despite these provisions, which the Democrats claim to oppose, only seven out of 47 Democratic senators voted “nay”, ensuring passage by a lopsided margin.


The Democrats raised only one substantial criticism. They demanded more aggressive trade war measures against Chinese technology company ZTE and inserted a provision keeping in place penalties against the firm that Trump had sought to eliminate.

It's a bi-partisan waste, it's a bi-partisan scheme.  The American people have needs and no one in government seems to care about those needs.  Instead, tons of money is dropped into the sinkhole that is military spending.

Monday, June 25, 2018.  You can't talk immigration without acknowledging the wars, Moqtada al-Sadr and Hayder al-Abadi announce an alliance, US troops are threatened publicly, and much more.

In the US, will we have a serious debate on immigration?

Or will it just be more Hillary Clinton funded protests that misrepresent what's taking place?

Why do people immigrate?  The supposed supporters of the immigrants who have just sprung up in the last two weeks don't seem to know and just seem to have a "Yeah, let everyone come to the party" attitude.  That's not really going to convince a lot of people.


Khalil Bendib: In the summer of 2015, a wave of refugees, taking perilous sea and land crossings to get into Europe, revealed one of the worst humanitarian crises in modern history.  The wars in Syria and Iraq -- and the worsening situation in Afghanistan -- having forced hundreds of thousands of people to leave their homes and risk their lives to seek sanctuary elsewhere.  According to the most recent reports, in 2014, 14 million people were displaced by war -- the most in a single year since WWII.  In the past decade, 40,000 people died trying to cross international borders. The dramatic increase in the influx of refugees to Europe has produced a rise in anti-refugee sentiment, the enactment of anti-refugee laws and the construction of walls and fences exacerbating the plight of millions of people who were forced to flee violence and poverty.


That's from last week's VOICES OF THE MIDDLE EAST AND NORTH AFRICA (KPFA, here for the June 20, 2018 archive).

Malihe Razazan:  And you give several examples in your book on the militarization of border areas -- and specifically one that we are very familiar with on the US - Mexico border.  You write, "By 2010, the border patrol had more than 20,000 agents, Customs and Border Protection -- CBP -- employs a total of 59,000 employees including customs officers, pilots and maritime interdiction teams.  In order to hire such a large number of employees quickly, the border patrol removed a number of requirements such as passing polygraph exams and drew heavily on veterans returning from the wars in Iraq and Afghanistan -- who make up some 30% of agents

Reece Jones:  Yeah and that's very evident at the US - Mexican border which I think is often emblematic of the changes that are happening at a series of borders all around the world.  The data that you just mentioned is quite clear on these changes that have happened at the border.  At the US - Mexican border, the border patrol in 1990 had a budget of about 300 million dollars and had about 300 agents.  Today?  Their budget is 300.5 billion dollars and they have over 21,000 agents.  So there's been this dramatic increase in the number of agents there.


Reece Jones is the author most recently of VIOLENT BORDERS: REFUGEES AND THE RIGHT TO MOVE.  The borders are militarized.  The people are trying to escape poverty -- on the US - Mexico border -- and war elsewhere.


If the new borders effect elephants, Reece observed, that seems to arouse more public sympathy than if people are killed trying to cross borders.

Is this what Sara Firth calls a "what's the point moment"?

Sara Firth‏ @Sara__Firth 44m44 minutes ago
Having a real what’s the point moment today thinking about Sara’s story. A beautiful young displaced girl in Iraq dies because her family can’t afford the cancer treatment. I literally get more traction when I shoot an iPhone video of someone yelling.
1:13
442 views
2 replies6 retweets5 likes


The selectivity with which we, as a people, show compassion is worthy of a discussion that won't take place because we're all so good and wonderful and would never, ever ignore suffering of children, right?  Keep kidding yourself.

In Iraq today, confusion continues over an attack two Sundays ago.  Was it the US that attacked Shi'ite forces?  The US whispered to CNN that it was Israel.  Now that whisper is being rejected.


Iraq's Popular Mobilisation Forces #PMF clarify that last week's attack on the 45th and 46th brigades at Sinjar on the #Syria #Iraq border was from US missiles and led to the martyrdom of 22 PMF fighters. facebook.com/WarMediaTeam/ 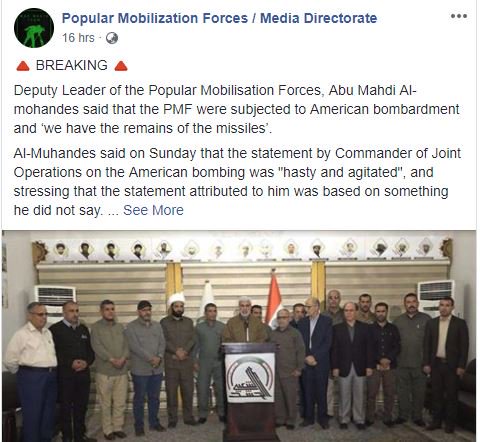 For those who don't believe this is major -- and judging by the lack of US media coverage, a lot do not feel it is important, please note this.


They will target the Americans for targeting the PMF.

And this is the group, please remember, that came in second in the May 12th elections.

SecArmy‏Verified account @SecArmy 20h20 hours ago
It was my absolute pleasure to meet and recognize deployed Soldiers in Iraq, Kuwait, and Afghanistan during my @CENTCOM visit this week. Your talents are not unnoticed and I appreciate all that you do for our @USArmy and our Nation.
2,165 views
0:31 / 0:57
0:26
2,165 views
7 replies44 retweets158 likes


And how are you going to ensure that those US troops in Iraq are not attacked by the militias?

Remember, the League of Righteousness is part of the PMF.  It was Barack Obama who made a deal with the League.  Are we still trying to ignore that?


This morning the New York Times' Alissa J. Rubin and Michael Gordon offered "U.S. Frees Suspect in Killing of 5 G.I.'s." Martin Chulov (Guardian) covered the same story, Kim Gamel (AP) reported on it, BBC offered "Kidnap hope after Shia's handover" and Deborah Haynes contributed "Hope for British hostages in Iraq after release of Shia militant" (Times of London). The basics of the story are this. 5 British citizens have been hostages since May 29, 2007. The US military had in their custody Laith al-Khazali. He is a member of Asa'ib al-Haq. He is also accused of murdering five US troops. The US military released him and allegedly did so because his organization was not going to release any of the five British hostages until he was released. This is a big story and the US military is attempting to state this is just diplomacy, has nothing to do with the British hostages and, besides, they just released him to Iraq. Sami al-askari told the New York Times, "This is a very sensitive topic because you know the position that the Iraqi government, the U.S. and British governments, and all the governments do not accept the idea of exchanging hostages for prisoners. So we put it in another format, and we told them that if they want to participate in the political process they cannot do so while they are holding hostages. And we mentioned to the American side that they cannot join the political process and release their hostages while their leaders are behind bars or imprisoned." In other words, a prisoner was traded for hostages and they attempted to not only make the trade but to lie to people about it. At the US State Dept, the tired and bored reporters were unable to even broach the subject. Poor declawed tabbies. Pentagon reporters did press the issue and got the standard line from the department's spokesperson, Bryan Whitman, that the US handed the prisoner to Iraq, the US didn't hand him over to any organization -- terrorist or otherwise. What Iraq did, Whitman wanted the press to know, was what Iraq did. A complete lie that really insults the intelligence of the American people. CNN reminds the five US soldiers killed "were: Capt. Brian S. Freeman, 31, of Temecula, California; 1st Lt. Jacob N. Fritz, 25, of Verdon, Nebraska; Spc. Johnathan B. Chism, 22, of Gonzales, Louisiana; Pfc. Shawn P. Falter, 25, of Cortland, New York; and Pfc. Johnathon M. Millican, 20, of Trafford, Alabama." Those are the five from January 2007 that al-Khazali and his brother Qais al-Khazali are supposed to be responsible for the deaths of. Qassim Abdul-Zahra and Robert H. Reid (AP) states that Jonathan B. Chism's father Danny Chism is outraged over the release and has declared, "They freed them? The American military did? Somebody needs to answer for it."


The League killed US troops before.  Not in battle, to be clear.  And Barack made a deal to let their leaders out so that the League would turn over 1 living person and four corpses (all British citizens).  Didn't think of attacking the League to rescue the 1 living person, just wanted to make a deal.

The League is among those now vowing US troops will die.

Time to pay attention yet?

The militias came in second in the May 12th elections.

163 seats are needed to form the ruling coalition.  Moqtada teaming with Hadi al-Ameri brought their combined total to 111 seats.  If Hayder's joining that alliance, he brings with him 42 seats.  That's 153 total.  They would require only ten more if they are all three teaming.

If the KDP or Ayad Allawi joins them -- both have sided with Moqtada before including during the 2011 effort to toss Nouri al-Maliki out as prime minister -- that's the coalition.