3 words to remember 'I don't recall'

Okay, everything from this article will probably be Donald Trump Jr.’s lying!

Guess what?
Good.
You should as well.
Is Junior a crook?  I have no idea.  But he’s smart to say he doesn’t recall.  If the FBI ever questions you, you should do the same.  The police question you and you flat out lie?  Too bad for their own luck.  You lie in an FBI interview, you can be charged with that.  It can be over a minor lie.  You might say you worked somewhere for two months longer than you did.  They can charge you for that.  They will charge you for it – or threaten to – if they think they need to leverage someone else or make a case against someone else.
The FBI?  Thugs.  I am sorry but you are not forced to tell the truth in a court of law – you can plead the fifth, you can refuse to testify to avoid self-incrimination.  So the notion that you can be charged with a crime for misrepresenting to the FBI  with – as the charges against Flynn demonstrate – their ‘judgement’ of what qualifies as lying?  Oh give me a break.  Do your own job, G-man and G-woman.


You cannot trust them.  If you appear before them, you need an attorney to sit in with you.  With or without an attorney, “I don’t recall” should be your standard reply.

Wednesday, May 16, 2018.  Moqtada and the KDP are among the big winners in the national elections.

Al Jazeera English‏Verified account @AJEnglish May 14
With over half the votes counted, powerful Shia cleric Muqtada al-Sadr has emerged as the leading contender in the Iraq elections aje.io/drn3n


The results seem to have surprised many.

Replying to @htTweets
Strange! Firebrand Iraqi Moqtada al-Sadr formed the Mahdi Army in 2003 which was responsible for bloodshed on the streets on Basra and the shooting down of coalition planes. He ordered killing of British n US army in Iraq. Now he might be the PM of Iraq.
2 replies1 retweet0 likes

Danny Sjursen‏ @SkepticalVet May 14
Moqtada al-Sadr’s militia killed 2 of my soldiers and maimed others back in 2007. Now it looks like he’s won Iraq’s latest election. This is The inherent risk of imposed democracy. This is why we need to #SayNo to the next regime change!!
5 replies18 retweets27 likes


The results certainly surprised  who wrote a 13 paragraph 'analysis' of the upcoming vote as Iraqis headed to the polls -- a 13 paragraph write up that didn't note Moqtada until the 13th and final paragrah.

Meanwhile SPUTNIK posts a piece insisting that the results of the election are a victory for Iran.  However, AL-MONITOR, looking at the same results, notes the coverage in Iranian media which does not embrace the narrative the Iran won in the elections:


The Reformist Shargh newspaper wrote that the surprising results of the Iraqi elections may signal a greater Saudi influence in Baghdad.
“The recent proximity of Muqtada al-Sadr to Saudi Arabia has led the Sairoon Alliance to be partly considered as a group backed by the Saudis and … to some extent means greater influence of Saudi Arabia [in Iraq] compared to its regional rivals,” wrote Shargh on May 15, adding, “Sadr's supporters are opposed to Iranian influence and are vehemently anti-American.”
Describing Abadi as a figure who has the support of both Iran and the United States, Shargh wrote, “Even though Abadi achieved significant domestic and international success through the victory over Daesh [Islamic State], he failed to overcome economic problems, and this caused him not to achieve the results he expected in this election.”
Explaining the factors behind Sadr’s victory, the Reformist daily noted, “Muqtada al-Sadr, who has lately shifted his policies and turned to Riyadh, took advantage of combating corruption in his competition with his rivals and also maintained his own traditional supporters. … Now he can form the biggest Shiite electoral coalition and play a key and strategic role in electing the [next] prime minister.”
Moreover, Qasem Mohebali, former director-general of political affairs of the Middle East in Iran's Foreign Ministry, told the moderate Entekhab news site on May 15, “Perhaps the reason for [Sairoon] Alliance’s attraction for the Iraqi people was Muqtada al-Sadr's nationalist slogans like ‘Arab Iraq.’ On the other hand, the corruption of the previous governments was also impactful in turning people away [from the other groups].”
Meanwhile, conservative Tasnim News Agency reported on May 15 that Sadr is seeking to reach a coalition with Ammar al-Hakim's Hikma (National Wisdom Movement) and Iyad Allawi’s Iraqi National Alliance Coalition to form a “technocrat” government.
Jonathan Steele (MIDDLE EAST EYE) notes:

Sadr's alliance with the Communists is being described in much media and diplomatic analysis this week as "surprising". But its strength has been clear for a long time. In an interview with me last year - one of his rare encounters with a foreign journalist - Sadr outlined the positions that became the bedrock of his electoral campaign, along with candidates for the Communists and other secular groups: a strict clampdown on corruption, an end to sectarian quotas in handing out government jobs, the disbanding of all militias and their merging with the Iraqi national army, no intervention by Iraqi forces or militias across the border into Syria, and reconciliation between Shia and Sunni religious, political and community leaders.


Iran and the US

He even dared to say that once IS had been defeated, he wanted Iranian forces and the Americans to leave Iraq. While he called the Americans "invaders", he was diplomatic enough to call the Iranians "friendly forces" - but his message that both sides should leave Iraq was bold. It went well beyond anything that Abadi or Ameri would say or want.

No wonder that Tehran has publicly declared it will not allow Sadr to take power or play the decisive role in the government that will be formed after this weekend’s elections. "We will not allow liberals and communists to govern in Iraq," Ali Akbar Velayati, the senior adviser on foreign affairs to Iranian Supreme Leader Ayatollah Ali Khamenei, said in February.

Joyce Karam (THE NATIONAL) observes, "The main loser from the Sadrists’ comeback could be former prime minister Mr Al Maliki. Back in 2012, Mr Al Sadr formed an alliance with Ayad Allawi in an attempt to overthrow the then prime minister and Mr Al Sadr's Mahdi Army fought a war with Iraqi security forces under Mr Al Maliki in 2008."  Just how unpopular Nouri al-Maliki is was certainly revealed in the outcome.  The US puppet was installed by the US government twice -- 2006 and 2010 -- despite never winning an election.  In fact, the 2010 results were overturned by then-US President Barack Obama when Nouri lost.  (The US negotiated Erbil Agreement gave Nouri a second term in 2010 after the voters refused to.)  More than any other politician in Iraq, Nouri al-Maliki has become the symbol of corruption.  And corruption -- as real polling demonstrated in the lead up to the election -- consistently ranked as either the first or second most important issue among likely Iraqi voters.  Nouri even tried to align himself with the militias (PMF) in the hopes that this would help him win votes.  It did not happen.

Hayder al-Abadi, Iraq's current prime minister, ran on "I defeated ISIS, all by my short, fat self."  And that wasn't enough for him to win.  He appears to have come in a distant third.  Worst of all, he came in fifth in Baghdad.  Fifth.  That's a rejection of Hayder.  He came into office in 2014 (installed by the US) insisting that he would fight corruption.  But he never did.  He also, in October of 2014, announced that the Iraqi military would stop shelling civilian homes in Anbar Province but that didn't happen either.  Nothing happened on Hayder's watch that he could brag about.

No, he didn't.  ISIS remains active in Iraq.  ISIS has a brief morphing in Iraq where they were able to hold territory (such as Mosul) but that wasn't ISIS's original goal.  Their goal is to inflict terrorism via violence.  They continue to pursue that goal and, despite Hayder's claims to the contrary, ISIS continues to be successful in achieving their goal of terror.

Hayder misread the room and thought his empty boasts would be enough when they were only meaningless words from a politician that had already made many promises but achieved nothing.

The US State Dept is starting a whisper campaign that Moqtada will side with Hayder so Hayder can have a second term -- that is what the US government wants.  But there's no indication that this is what Moqtada would want or support.  Watch the press to see who presents that US government created rumor as word that's supposedly developing in Iraq -- it's not brewing in Iraq.  They hope they can plant it in Iraq and have it pick up speed but it's a US created rumor with no current basis in fact.

But another win that took place is news as well.

RebazaBarzani‏ @RebasaBarzani 22h22 hours ago
KDP, the heart of Kurdish nationalism. KDP has won with majority of votes in Kurdistan Region. KDP also got most votes in Iraq as a single party, while all others are alliances. KDP will always be number one in KRI, because of Hewlêr. President Barzani always proud of Hewlêr.
0:09
739 views
2 replies16 retweets56 likes


The KRG.  The KDP.  You may remember that it was over for the Barzanis and the KDP.  That is what all the US gas bags told us.  In September Massoud Barzani, then-KRG president, delivered on the promise to let the Kurds have a say about what they wanted for their future.  A non-binding referendum was held asking the Kurds whether they wished to remain a part of Iraq or to go from semi-independent to fully independent.  Over 92% of the voters voted for full independence.

This surprised some gas bags in the US -- demonstrating just how deeply stupid they were.

The response after the non-binding referendum was to attack Barzani and swear that the KDP had slit their own wrists and that it was over for them -- US gas bags had that response.

As we pointed out repeatedly, this was something the Kurds wanted -- to vote on this -- and the vote demonstrated that they wanted independence (which everyone in the world should have already known).

Baghdad retaliated against the Kurds.  And the US gas bags then gassed that this was part of the proof that it was over for the KDP.  No.  As we noted, the attacks from outside would only bind the KDP closer to the average Kurd.  And it did.

As we wind down, let's note


For newly-engaged Cillia Edwards, being deployed to Iraq meant she’d have to say yes to the dress from an online store and that her fitting would be with the on-post tailor in Erbil stripes.com/news/bride-to-… via @DRauda_Stripes 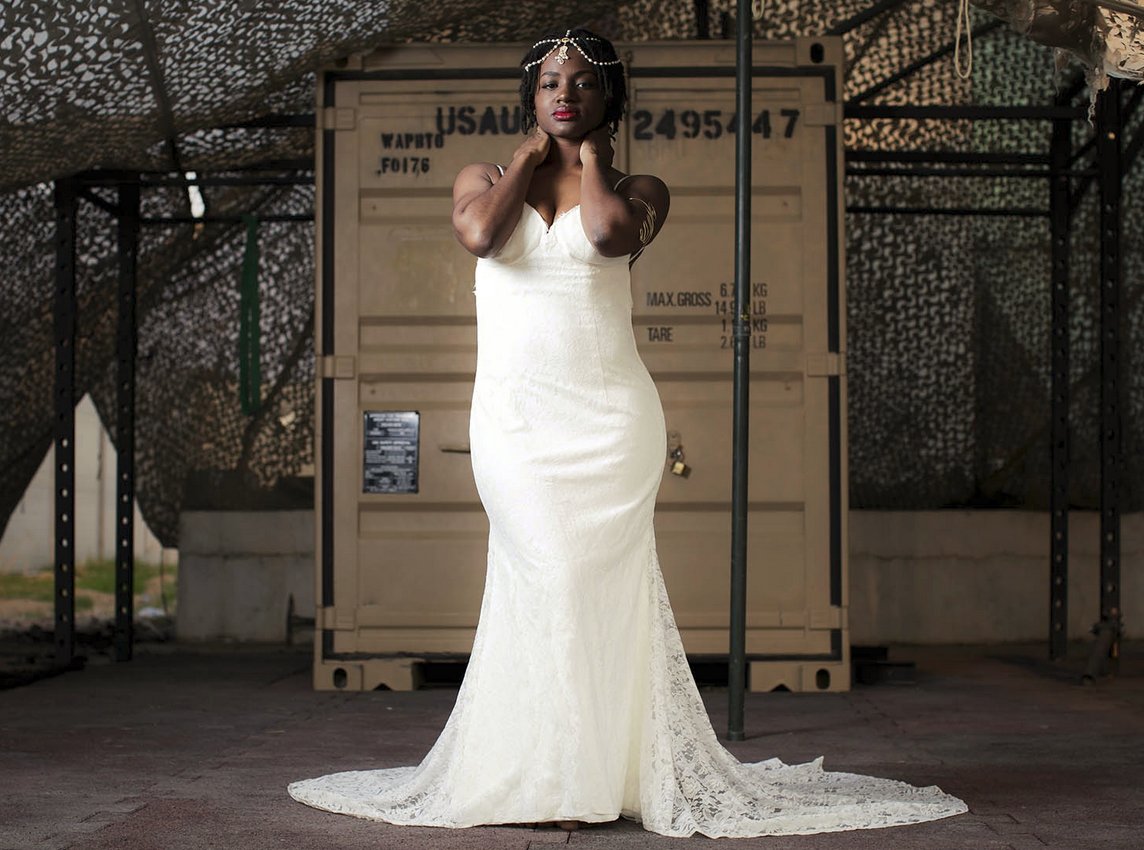