Maxine Waters is coming off unhinged

A lot of people stood by Maxine Waters despite ethical problems and ethic investigations.

Some of us may be wondering now why we bothered.

The Congress woman has gotten more and more . . . batty?

The Constitution matters if Maxine can't grasp that, maybe she needs to leave Congress?


Under that standard, most recently advanced by Rep. Maxine Waters (D-Calif.), opposing anthem kneelers would easily satisfy the constitutional standard, since there would be no standard.
In a speech before the Congressional Black Caucus town hall, Waters criticized other Democrats for failing to move aggressively for impeachment. She said, “Impeachment is about whatever the Congress says it is. There is no law that dictates impeachment. What the Constitution says is ‘high crimes and misdemeanors,’ and we define that.” In so saying, Waters dismissed the constitutional obligation to find “high crimes and misdemeanors” in assuring supporters that they can simply get rid of Trump on a muscle vote. In 1970, when Gerald Ford was still a member of the House of Representatives, he said, “An impeachable offense is whatever a majority of the House of Representatives considers it to be.”On a very superficial level it is a political decision in the sense that it’s a decision that is ultimately made by politicians. However, that does not make the basis for decision purely political. It is akin to saying that, since a priest can grant absolution on his own authority, sin is a discretionary pastoral question. The Framers struggled to establish a standard and process to make impeachment both difficult and substantive.

I'm not a fan of Donald's but I don't see why Maxine feels the need to trash her own legacy over Donald Trump?

Wednesday, October 4, 2017.  A US service member is killed in Iraq on Sunday and so many ignore it -- media, the state's governor, the city's mayor, etc.


Stupidity on CNN.  10,000 ads supposedly on FACEBOOK in 2015 and 2016 [*supposedly purchased by Russia*].  Supposedly.  The network invites Senator Richard Blumenthal on.  He's asked about the alleged ads which supposedly targeted Michigan and Wisconsin.


"They had to have some kind of highly sophisticated and technical advice."

Is Blumenthal as stupid as Hillary Clinton?

Did anyone need expert advice to know Wisconsin would be in play?

Have they not read Matthew Rothschild's hysterical Tweets and efforts over the last years?

Scott Walker, a Republican, was elected governor of Wisconsin in 2010 and again in 2014.  He also survived the 2012 recall effort Rothschild and others led.  That tells you the state is up for grabs.


We were also struck by the nonsense Rothschild and Welsh offered regarding Wisconsin.  At one point, Rothschild insisted, "Well it was devastating when he [Walker] won the recall I've got to say because we had a million people sign signatures to get him out of office, all we needed was about 400,000 more people to vote against him and he'd have been out of office."

Facts are needed for an honest debate.  400,000 votes were not needed.  Walker received 1,335,585 votes while Tom Barrett received 1,164,480 votes.  171,106  was the amount of additional votes needed to defeat Walker.  Does Rothschild struggle with basic addition and subtraction?  That would explain a great deal.

(For any wondering, 939,266 registered voters did not vote in the recall.  Had Rothschild and company worked harder, they wouldn't have had to pull from Walker's support, only motivate 1/4 of the registered non-voters to vote and vote for Barrett.  All figures from the Government Accountability Board of the State of Wisconsin.)

Rothschild clearly struggles with other realities.  Despite the (small) ongoing protests against Walker, his approval rate was 48% with 46% disapproval.  Rothschild may want to portray Walker as hugely out of step with Wisconsin but the polling does not suggest that's the opinion of the state's citizens.

That doesn't mean Walker's good or great.  It does mean that despite running off national readers with their near exclusive focus on Wisconsin, The Progressive has failed to communicate effectively to the people of Wisconsin on what they see as Walker's faults.

That is the portrait of a a swing state.

In fairness to Richard Blumenthal, he doesn't know s**t about Wisconsin.  (He represents Connecticut.) But Hillary and her campaign should have.

If, IF!, FACEBOOK ads were bought to influence Wisconsin, no expertise was needed, just a basic grasp of the facts.

You got the 'reporter' who did nothing but repeat what Democrat Adam Schiff told him.  No fact check, no alternative opinion.  Then they brought on Democrat Richard Blumnethal.  Both men promoted the still not proven allegations that Russia influenced the election.  Two segments, no skepticism, the very definition of Fake News.


We'll stop there on CNN except to note that Howard Kurtz looked like a media critic and Brian Stelter looks like a child molester.  In TV, looks matter.  And on CNN, they matter when it comes to women but any ugly piece of s**t man can get hired.  Oh, let's note one more point, Chris Cuomo needs to stop picking fights with guests on air and needs to stop cutting them off.  He's far too emotional and hysteria-prone to be on TV.  (He's also aged out of his limited looks.)


Let's stay with the trash that is Brian Stelter.

As noted in yesterday's snapshot, he can use Iraq as a political football on his Twitter feed -- can and did -- but he still hasn't Tweeted about the US service member who died in Iraq Sunday.  He hasn't even reTweeted Jake Tapper's Tweet.


Stelter is an idiot and an embarrassment. 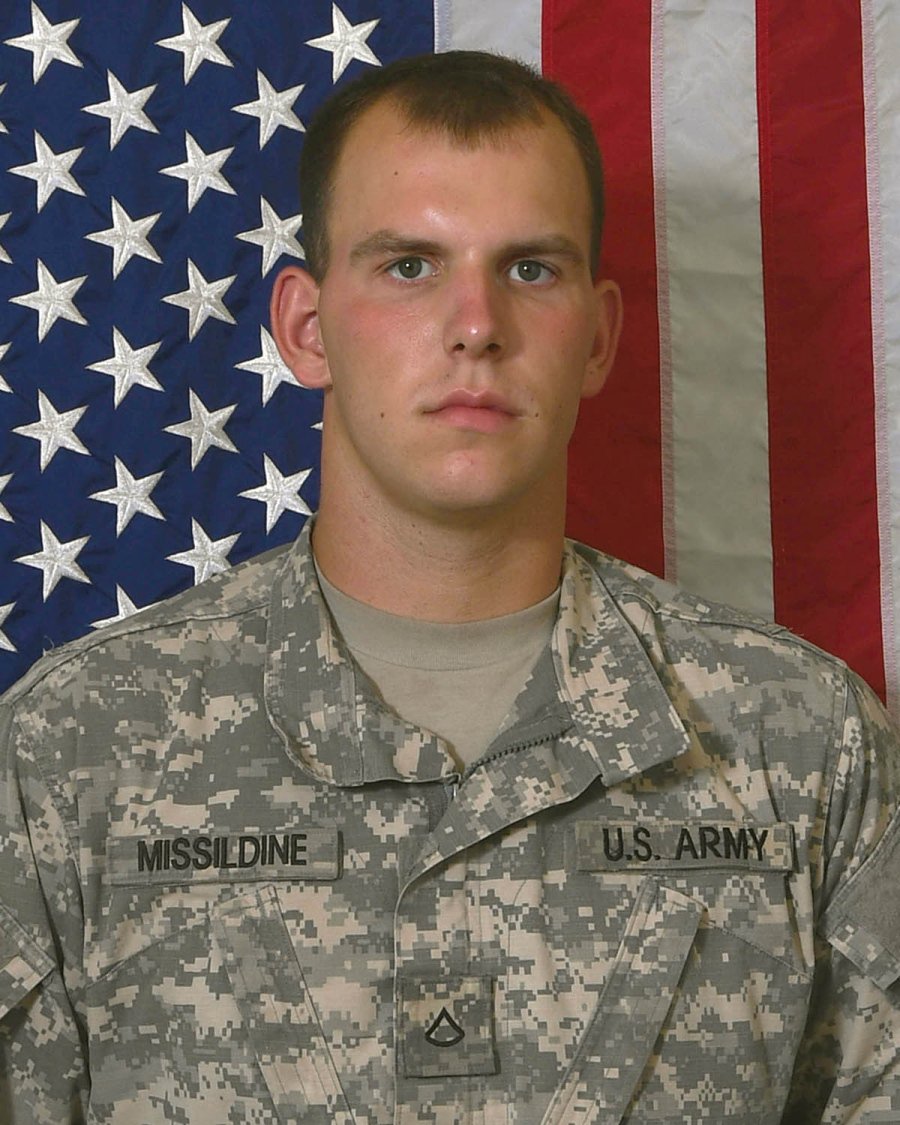 Troops learn early on to call peers by their last name. But for Pfc. Gabrielle Babbitt, she was drawn to a fellow soldier she just calls Alex, the guy with a “silly” Texas accent.

She met Spec. Alexander W. Missildine while training in summer 2015, with her coming from Fairport Harbor, Ohio, and he from Tyler in East Texas. Both were learning to become Army truck drivers.
[. . .]
“I told him, ‘You have to promise me you’ll come back.’ I had a feeling something was wrong, because normally he’d send a message throughout the day just to say hi,” said Babbitt, also 20, “and I didn’t hear from him at all.”


KLTV is the local ABC affiliate in Tyler, Texas.


And this is from KLTV Doug Murray's text report:

"Towards the end of high school, we would talk about that transition of graduating and getting to real life," former Robert E. Lee High School Band Director Robert Castillo said. "He was really excited about serving his country."
[. . .]
"I knew him when he was an 8th grader at Hubbard," Castillo said. "He took care of me, he took care of the band and he had pride in helping others."
Outside Missildine's mother's home there are yellow ribbons affixed to the mailbox and tree. His mother, Robin Goodwin, says the family does not wish to offer any official statement in relation to his death, but expresses thanks for the condolences pouring in.

Tyler ISD released the following statement on Spc. Missildine’s passing:
“Tyler ISD is saddened to learn of the passing Spc. Alexander Missildine, a 2015 graduate of Robert E. Lee High School. The District joins the Tyler community in thanking him for his service to our country. Our thoughts and prayers are with his family during this time of loss.”


Good for the school district.

How sad for the governor, Greg Abbott, that he can Tweet about carnivals but can't Tweet (or release an official statement) on the fallen.

I usually note governor's statements.  If a member of Congress notes a death and I'm aware of it, I try to note that as well.

Martin Heines.  Do you have no ethics?

The fallen is from your city.

You've got a Twitter feed and you should have already issued a proclamation.

I'm making an exception for Martin.

I met him in 1992 while helping the Clinton campaign.  (I believe it was with Ron Brown -- it was one day 25 years ago so that could be wrong -- I remember he was proud of a new home he'd built for himself and how he'd only put in a microwave, no stove or oven.)   I'm going to call him out here.  This is your city.  You've been elected mayor at least twice.  Get off your candy ass, step up to the plate and issue a statement on Alexander Missildine.


At some point, maybe someone can tell America when US troops get to leave Iraq?

Because the answer as of now is "never."

The US government -- regardless of who the Oval Office occupant is -- wants "stability."  Which means they want someone who does their bidding.  Bully Boy Bush installed Nouri al-Maliki.  Barack re-installed him.  Then Barack installed Hayder al-Abadi who remains prime minister.

These two men have not brought 'stability' and probably can't.

They both fled Iraq decades ago and only returned after the US-led invasion.

No one wants to be governed by an outsider.

Add in that the outsider is picked by a foreign government.

The US government's 'plan' appears to be that they can exhaust the Iraqi people.

Which is why US troops remain in Iraq propping up the government that the Iraqi people do not support.

The U.S. just voted against a U.N. resolution that would ban the death penalty for gay consensual sex. No words. independent.co.uk/news/world/ame…
7 replies55 retweets37 likes


Iraq’s autonomous Kurdistan region announced on Tuesday it was calling presidential and parliamentary elections for Nov. 1 as the Kurdish leadership moved to capitalize on a referendum that delivered huge support for independence.
The central government in Baghdad imposed further punitive measures in retaliation for the independence vote last month by slapping sanctions on Kurdish banks and halting foreign currency transfers to the Kurdish region.

We're going to wind down and I'm going to note there are two hearings -- one I've already attended and one I'm attending today -- that I'm planning to cover in this week's snapshots.  (That's for me to try to make sure I do it.)