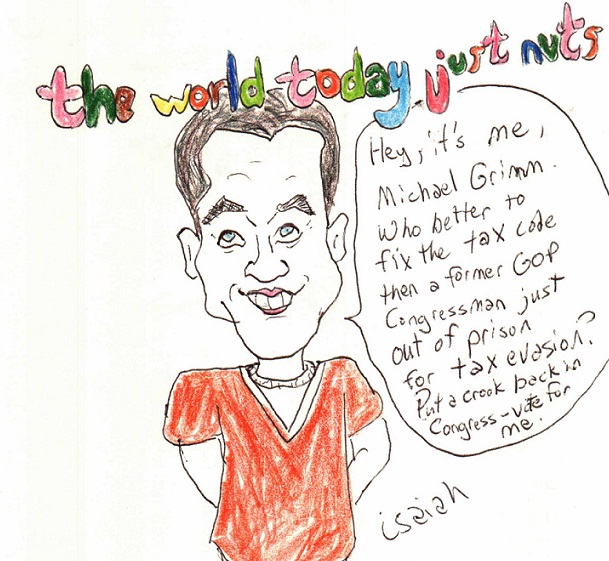 At INFORMATION CLEARING HOUSE, you can find Dennis Bernstein's transcript of his conversation with John Pilger regarding Ken Burns' hideous mockumentary.  I'm serving up the conclusion of it:


DB: There is a lot of discussion now of how dangerous Trump is, but if you look back at the Vietnam policy, Trump seems to fit right in.
JP: Trump’s specialty is abusing the world. But you’re right, he is just the latest on the team. In fact, he is a bit of a wimp in comparison with the ones who have come before. Obama was probably one of the most violent presidents in US history. He conducted a record of seven simultaneous wars, not to mention his assassination campaign.
This is not to say that Trump cannot get up in speed to equal this terrible record. But  Once you unTrump should be understood as a symptom and a caricature of a violent, extremist system.derstand that, you can understand how the past has helped create the present. Trump is not an aberration, he is a caricature. Much more interesting is the way the suave Obama went about his violent presidency without due recognition.
DB: Let’s not forget that Hillary Clinton threatened to “totally obliterate” Iran.
JP: She said that when she was running against Obama. Well, Iran has 80 million people.
DB: She and Colonel Lansdale were talking the same language.
JP: Yes, and President Truman was talking the same language when he dropped two atomic bombs for reasons that had nothing to do with making the Japanese surrender. These were the first terrible explosions in the Cold War, aimed at intimidating the Soviet Union.
DB: What responsibility does the corporate media have for the US and world population not knowing the real story?
JP: They are the gatekeepers. People turn to the media for their information, to be able to make some sense of a difficult world. And they don’t get it. You will find that most of the exceptions are on the World Wide Web. That is where my article was published. It would not have been published in The Guardian, where I used to publish.
I don’t agree that everyone is wildly enthusiastic about Burns’ film. I think there has been a lot of critical response to the film as well. This is going to build, and I suppose he has done us a service in opening up the wound so that people who really experienced Vietnam can describe what happened.
DB: Burns also says he is grateful to “the entire Bank of America family.”
JP: The Bank of America was a corporate prop of the invasion that killed up to 4 million people. That is just corporate speak and it rather demeans a filmmaker to talk like that.

Read the whole thing and ponder that PBS is treating Burns garbage as something worth viewing.

Tuesday, October 3, 2017.  Chaos and violence continue, the US service member killed in Iraq Sunday is identified, former Iraqi president Jalal Talabani has died, and much more.


Let's note two topics before we get to Iraq.

Tom Petty has passed away.

That's him singing "Insider" with Stevie Nicks.  The two also dueted on the hits "Stop Draggin' My Heart Around," "Needles & Pins" and "I Will Run To You."  With his band the Heartbreakers, he created some of the greatest songs on radio in the last decades including: "The Waiting," "Refugee," "Breakdown," "American Girl," "Don't Come Around Here No More," "Here Comes My Girl," "Into The Great Wide Open" and "Jammin' Me."  He also had solo hits (including "Free Fallin'") and was a member of the Traveling Wilburys.  He toured constantly and often with Stevie Nicks and Bob Dylan.  He will be sorely missed.


Joe Heim‏Verified account @JoeHeim  19h19 hours ago
No single day of America's wars in Afghanistan and Iraq produced as many American casualties as were suffered last night in Las Vegas.
69 replies1,453 retweets2,368 likes


So Joe Heim's arguing that assault weapons should be provided by the government to all US citizens?  He's comparing armed troops to civilians in Las Vegas.  What a stupid analogy he's tried to make.


Does it occur to Joe Heim that the Iraqi civilians -- who don't have armor or weapons and don't travel in squads -- have died in far larger numbers?

Because he's a fool doing a foolish Tweet that's as empty as his own head.


See above but note the circle jerk.

Now for the ultimate in stupidity and racism.

How many Iraqis died, Schindler?

Because many were trapped in the city.

It's really racist of Schindler, Burns, et al to make their pronouncements of war that ignores the unarmed.

They should all be ashamed.

And while they try to grandstand on Iraq -- an issue they pay no attention to -- Monday brought news of another US fatality in the Iraq War.

They're fond of using the Iraq War as a political football.  They're just unable to cover the ongoing war -- to demonstrate caring and/or awareness.

What a telling moment for an out of touch media.


As noted in Monday's snapshot, one service member (Alexander W. Missildine) was killed and another was injured -- there has been no update on the injured service member.

Meanwhile, Turkey, Iran and what passes for the Iraqi government sent troops to the borders of Kurdistan following the KRG's referendum on independence.  PRESS TV notes:

Iran and Iraq have started out joint military maneuvers in the Islamic Republic’s west and northwest to practice providing security for their common borders.

The drills, codenamed Eqtedar (Authority), recruit armored, artillery, and infantry units of the Iranian Army, the drone and helicopter squadrons of the Ground Forces of Iran’s Islamic Revolution Guards Corps (IRGC), as well as some units enlisted with the Iraqi Army, ISNA reported on Monday.


In the KRG, the referendum was extremely popular -- approximately 92% of voters voted for it.  The threats being made against the KRG have not weakened the internal support.  Histyar Qader (NIQASH) reports:

Almost immediately the Iraqi government presented the Iraqi Kurds with a post-referendum list of demands, saying they needed to give up control of their border posts, including airports, as well as oil exports. They also demanded that the results of the referendum be annulled and said they would not recognize said results, although as some pundits have pointed out, the referendum was always non-binding.
As Abdullah al-Zaidi, a representative of the ruling Shiite Muslim political alliance that runs the country, told NIQASH, the Kurds should have been expecting that kind of reaction.
“We will not negotiate on the basis of the Kurdish independence referendum and we informed the Kurds of this position before the referendum was held,” says al-Zaidi, who is responsible for the Kurdish portfolio in Baghdad. “We also told the Kurdish delegation that negotiations before the referendum would be different from negotiations after the referendum.”
Asked what would bring all parties to the table, al-Zaidi told NIQASH that Iraqi Kurdistan needed to “annul the referendum results and the consequences, or face internal isolation”.
There have also been threats of external isolation from neighbouring countries upset by the referendum, such as Turkey and Iran.
“We consider that any kind of collective punishment by these countries against the Kurdish region to be illegitimate,” Safeen Dizayee, the spokesperson for the Iraqi Kurdish government, told NIQASH. “We hope these threats do not become reality.”

In fact, Dizayee  believes that shared economic, security and political interests will prevent Iraqi Kurdistan from being isolated by international allies and enemies alike. However, he concedes that the region’s relationships with Iran and Turkey are going to be more complicated from now on, and that certainly they will be different than before the referendum.

Oh, cowards line up behind Hayder al-Abadi -- the puppet Barack installed in 2014.


The list of friends and enemies who oppose this Kurdish example of direct democracy grows longer by the day.
European media have found it particularly notable that this time, the US – generally a staunch ally of Iraqi Kurdistan – couldn’t do the back room deals their envoys usually do, to postpone the referendum. Many analysts noted that the statement the US eventually issued on the topic was unusually harsh.
Turkish and Iranian opposition is also always explained by reporters: Both fear Kurdish independents in their own countries.
Germany is home to the largest Kurdish diaspora in the world and the Germans are feted in Iraqi Kurdistan for helping the local military with weaponry to fight the extremist group known as the Islamic State. Yet the German foreign office has also expressed disapproval of the referendum.

In some German media, the referendum was praised. But often in these opinion pieces, the semi-autonomous Kurdish zones in Syria are also a focus, possibly because many left-wing Germans are admiring of the brand of politics known as “democratic confederalism” practised by the mostly Syrian Kurds present in those areas.

In other news, Jalal Talabani has passed.

#BREAKING - Jalal Talabani has passed away today. Former President of #Iraq between 2005-2014 and President of the #Kuridsh #PUK party 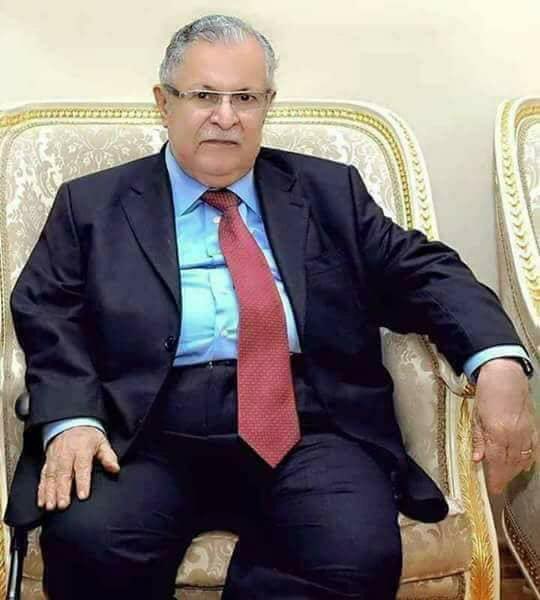 Jalal's death is not surprising in the least.

Bully Boy Bush was still president when we reported here on what happened as Jalal left an American hospital, pigged out and collapsed.

He also lied about his health.

Such as when then US-vice president Joe Biden asked Jalal to torpedo the resolution for a no confidence -vote on Nouri al-Maliki.

Jalal did as he was told/bribed.  And since the no confidence vote was favored by Sunnis, Shi'ites and Kurds, Jalal quickly high tailed it out of Iraq.  He fled to Germany and lied that he needed life threatening surgery.  In reality, he had elective surgery on a knee.


But karma bit him in the ass for that.

Months later, December 2012,  in Baghdad, he got into an argument with Nouri and Jalal suffered a stroke.   The incident took place late on December 17, 2012 following Jalal's argument with Iraq's prime minister and chief thug Nouri al-Maliki (see the December 18, 2012 snapshot).  Jalal was admitted to Baghdad's Medical Center Hospital.    Thursday, December 20, 2012, he was moved to Germany.  He could not speak, he could not move -- but the Talabani family disguised that and lied to the Iraqi people.


To further the lie, they staged photo ops.

The first time was in May. Jalal was posed for a series of photos that appear to indicate his body was present but that was all. 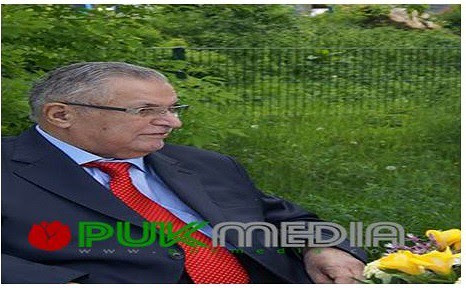 The second set, months later, also showed Jalal posed with his right side to the camera.

The first set of photos led to comparisons to the film Weekend At Bernies (where two men use Bernie's corpse to pretend Bernie's still alive).

Over 18 months later Jalal would return.  They wouldn't be able to use the return to pump up his party in elections because he couldn't speak.

In other words, the Talabani family lied to the Iraqi people, deceived them.  Iraq had a non-functioning president who should have been removed from office.  But the Talabanis lied to keep Jalal in a post he could not serve.

How fitting that Jalal passed away when the KRG was closer than ever to independence.  It was 2009 when he angered many by declaring, "The idea of a united Kurdistan is just a dream written in poetry."


Isaiah's THE WORLD TODAY JUST NUTS "Put a Crook back in Congress" went up yesterday.
New content at THIRD: