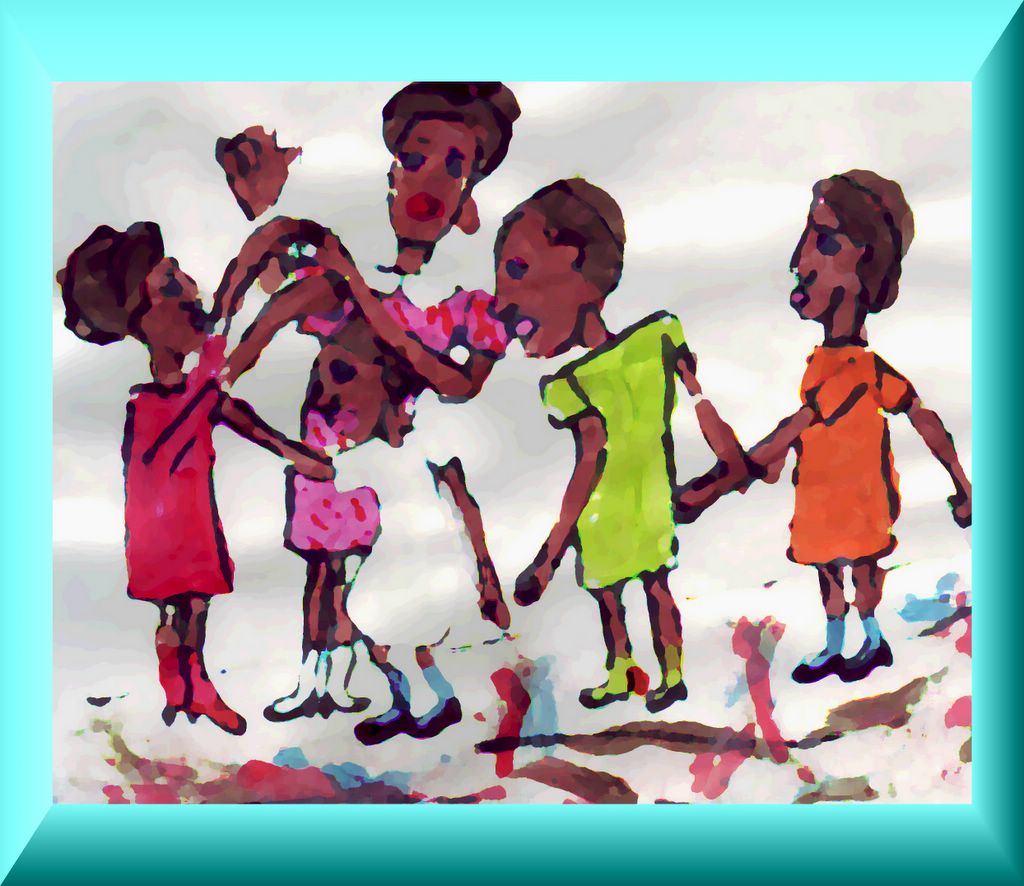 The artwork to the left is from "The One About The Nation" (The Third Estate Sunday Review) and let me join Rebecca in praising the art that the gang does. I keep telling them that if they ever wanted to take a week off from writing, they could just do illustrations.

They're less thrilled with them. They see it as something to do to illustrate an article and I'm not attempting to say everyone is incredible. Their purpose is to illustrate and I think they always achieve that; however, I also think that they frequently accomplish quite a bit more than just that.

Thank you to Kasey who e-mailed to remind me of something. On Friday, "December 1st," at work Christmas gifts arrived. Sunny and my Christmas gifts from C.I. I still have shopping to do. So when I got home Sunday evening (I spent the weekend at Mike's), I gathered the gifts I had bought and set them around a bookcase here in my bedroom to goad me into wrapping them. I felt like I was forgetting something all last night and then I read Kasey's e-mail.

Women For Afghan Women is the name of the book I was noting in "Charlotte Perkins Gilman, Kim Gandy, Bay Fang" on Friday. The editor is Sunitha Mehta and she's one of the two women who gave the presentation. The other was Zohra Yusuf Daoud was the other woman. She contributes the chapter Miss Afghanistan which begins on page 102. Zohra Yusuf Daoud is with the Afghan Women's Association of Southern California (A.W.A.S.C.) From her chapter:

Once, before the Soviet invasion in 1979, women had rights in Afghanistan. They were treated like human beings. Once women were a productive part of society in Afghanistan, helping the nation grow. There was a time when women worked side by side with men in the fields just as there was a time when they worked side by side with men in parliament and in universities. Women once had a voice in Afghanistan; they were heard and acknowledged.
But to say that all women in Afghanistan had as much freedom as women in the United States would be incorrect. More accurately, only the privileged few, sprinkled throughout the urban areas of Afghanistan, gained these freedoms. Unfortunately, the rural areas of Afghanistan were rarely in step with the rest of the country. This reality we must acknowledge, that even before 1979, there was not total equality for all women. But we were working toward that goal and making progress.
I know because I was there. I was a part of that change. I am one of that fortunate minority of women who were modernized and educated in Afghanistan. I grew up in Kabul and led a reasonably charmed life. My father was a Columbia University graduate, a doctor, and Afghanistan's surgeon general. We were a well-off family. We were the kind of family that spent nine months of the year living in one home and the winter months in another simply because we could afford to escape the cold. I had three brothers and five sisters, which by Afghan standards was average. What was not the norm was the fact that my father encouraged us all to pursue higher education. And by all of us, what I really mean is all of his girls. My father taught us that in Islam it is written that all men and women have the right to knowledge, that is their duty as human beings to educate and to be educated. In my family, this belief was practiced.
The thirst for knowledge that my father fostered led me into one of the sweetest experiences of my life. In 1972 something as simple as a beauty pageant would forever change me. I was crowned the first ever "Miss Afghanistan." There was, of course, no swimsuit competition and no emphasis on beauty; to be perfectly honest, I was even a little chubby then. Instead, the pageant was about a woman's intellect and poise. It was about public speaking and academic knowledge. More than anything, however, this pageant was about progress. In America, pageants seem to be trivial events that have had feminists up in arms and perhaps rightly so. In Afghanistan, however, a pageant meant we were catching up to the world, working to fit in, joining the global community. It meant we were moving foward, moving away from archaic notions and toward a balanced modernization.

So that's a taste of one chapter in the book.Sunita Mehta co-writes the introduction (with Homaira Mamoor). Names that many Americans will reconginze include Gloria Steinem and Eleanor Smeal. I should note that Sunit Mehta is with (and co-founded) Women for Afghan Women. To repeat, the title of the book is Women For Afghan Women. The list price is $13.95 and you can also check your libraries.

Thank you to Kasey for reminding me. The gifts (which I did wrap last night) were right in front of the bookcase and I can't believe I didn't think of that when posting last night or when wrapping gifts after; however, Kasey remembered and e-mailed.

I did catch some of the gavel-to-gavel coverage of the Robert Gates hearing on Pacifica Radio today. Sunny listened to the whole thing on her computer and, between appointments, I'd rush out to catch some of it. What did I think? I thought that Aaron Glantz, Larry Bensky and their guests did a wonderful job and I think it's great that at least one of the "public radio" networks cared to cover them. (The snapshot contains a hilarious contrast between Pacifica and NPR today.) I think the Democrats, in the first opportunity to demonstrate that they are a party of change, flaunted that they won't do a damn thing without being pressured.

On the topic of the old Secretary of War, I'll highlight this.


"Rumsfeld's Final Snowflake" (Michael Whitney, CounterPunch):
Nothing Rumsfeld says can be trusted. He spies on Americans' phone calls, computers, medical records, bank records and groups. He has been a stanch supporter of planting propaganda in newspapers and TV. He introduced a program that created a "rapid response" team to rebut information that is critical of US foreign policy appearing on blogs, web-sites and letters to the editor. He controlled the flow of information coming out of Iraq and managed to silence many of the war's critics. He developed a plan for "Total Information Awareness" that is designed to control everything that the public sees and hears from cradle to grave.
Now he is trying to write his own legacy. It is just another in a long list of deceptions; a smokescreen created to conceal his responsibility in the deaths of hundreds of thousands of people.
The memo states that Rumsfeld was planning to make major adjustments and that "Clearly, what US forces are currently doing in Iraq is not working well enough or fast enough". But "what US forces were doing" was exactly what Rumsfeld told them to do; nothing more, nothing less.
When he told them to bomb Falluja to the ground, they followed his orders; and when they tortured and stacked naked prisoners on top of each other, they followed his orders. And, when they trained the Shiite death squads to kill and maim Sunni suspects, they followed his orders.
Every major decision in 4 years of conflict bears Rumsfeld's imprimatur. It's his policy; it's his war. If Rumsfeld continued as Secretary of Defense, then nothing would change, because he has absolute confidence in violence and deception as the two main instruments for political transformation.
Rumsfeld's memo is great reading for fiction-lovers. It provides a revealing snapshot of a leader who carefully considered every alternative before making a decision. It's a stark contrast to the intractable narcissist who ignored his advisors and bullied his generals. But, like I said, it's great fiction.

I agree with that and, let me add, Rumsfled knew he was leaving in October.

For more on the hearings, you should read the snapshot. It posted early for a snapshot these days so it only covers the first half of the hearings.