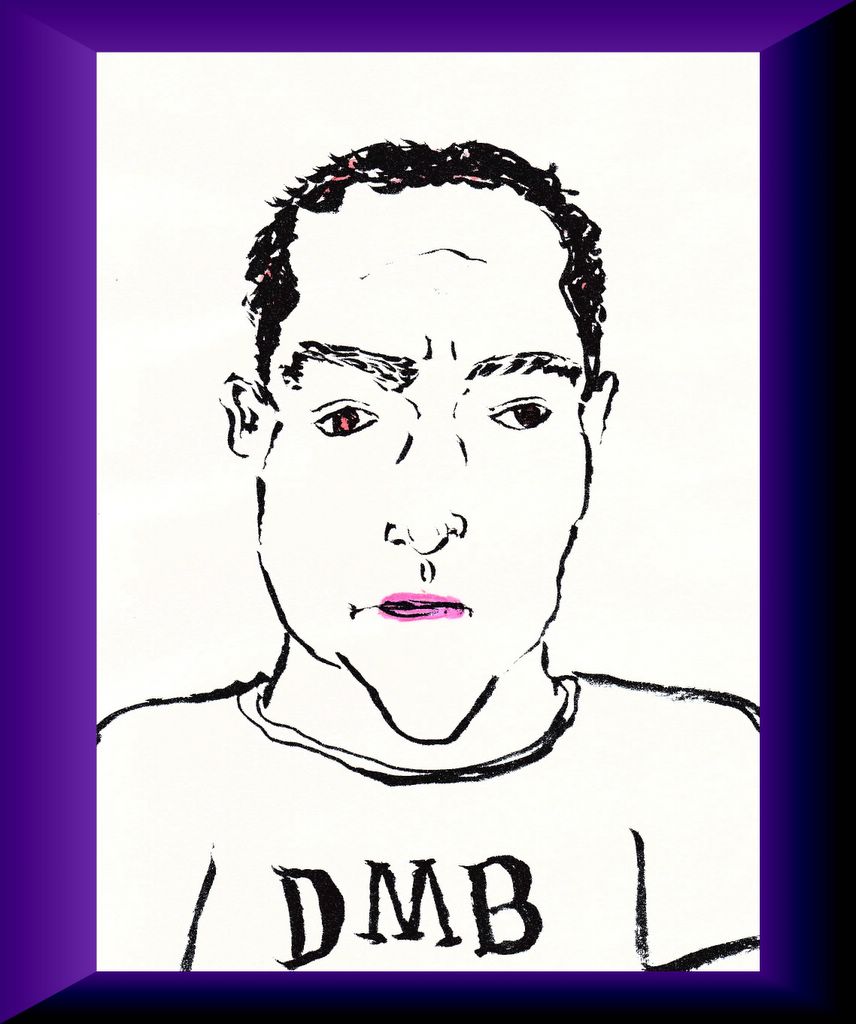 For the feature the illustration goes with, we watched a music video collection, Dave Matthews Band: The Videos 1994-2001. Now I like the band and had seen at least two of their videos. Sitting through all of their videos over a seven year period? I didn't know what to say because I thought I was the only one who was disappointed.

That wasn't the case. If you're a fan of the band and the videos have never really registered, don't watch this DVD. You may end up as disappointed as I was.

Musically, they make it for me on CD and in concert. But videos? They don't seem to have a clue. I hated the video for "Crash Into Me," for instance, because I love that song and to see Dave Matthews making a joke out of the lyrics in the video really did bother me.

Are they the deepest in the world? No. But I had thought they were written honsetly. The video made me feel like the whole thing was a put on and, for me, that's why I hated the collection so much. They have no visual style and they seem to exist from one video to another in the imagination of whatever director they've hired. But it was the antics of Dave Matthews in the song that really made me hate the collection.

It's the sort of thing I'd expect from Hootie & the Blowfish, this whole, "we're just here to make you laugh" attitude. One of their readers had checked the collection out at her local library and had suggested they take a look at it. I almost wish I hadn't because it really left a sour taste for me. But I've been reminding myself that some people aren't good with videos. I'll just focus on the music and make a point never to see the videos again.

There's a comparison to Huey Lewis in the article and I think that's valid. But when I woke up Sunday, I thought, "Phil Collins!" I wish I'd thought of that while we were writing it. It is that sort of "showman" and "entertainer" attitude, which Collins has, that tanks the videos.

Now I'm going to do something different tonight, post the snapshot and then zoom in on one thing in it.

This will also be carried at the Pacifica website. For more background on Gates see Consortium News and for Robert Parry's latest click here. Gates shouldn't be back-patted and glad-handed with his history. Danny Schechter the News Dissector notes: "Sadly, I saw John Kerry on CNN say he will vote for Gates because the country doesn't need a debate now on his appointment as the new Rummy Dummy. Huh?"


I wanted to zoom in on Mark Wilkerson. I think everyone's aware of how little media attention the war resisters have been receiving. If you haven't read his post, please do. In terms of the movement, the lack of coverage hurts. In terms of people?

Wilkerson's grandmother passing on that letter meant so much to him and appears to have not only let him find a family connection (at a time when they may not be as strong as usual, his family is a military family of many generations), it also validated his decision. When you make a difficult decision, you do have doubts very often. I would guess his doubts were increased by the fact that such a brave stand taken resulted in so little attention.

That's not to suggest, "Oh, he wanted attention, so he took a stand." It is to suggest that when you go out on a limb and there's so little attention (outside validation) and your life is in limbo as the military determines what they're going to do, you may wonder, "Well was it worth it?"

That letter meant more than any press interview could. At a time when he needed some indication that his choice was not just valid and worth it, but also something that was instilled in him (to stand tall), the letter demonstrates it was. His great-grandfather knew that a meaningless war wasn't worth sending people to die and the message resonates today.

That was my favorite part of the snapshot. I'm very happy for Mark Wilkerson. The letter is something concrete that he can refer to as he continues his stand and find support in.