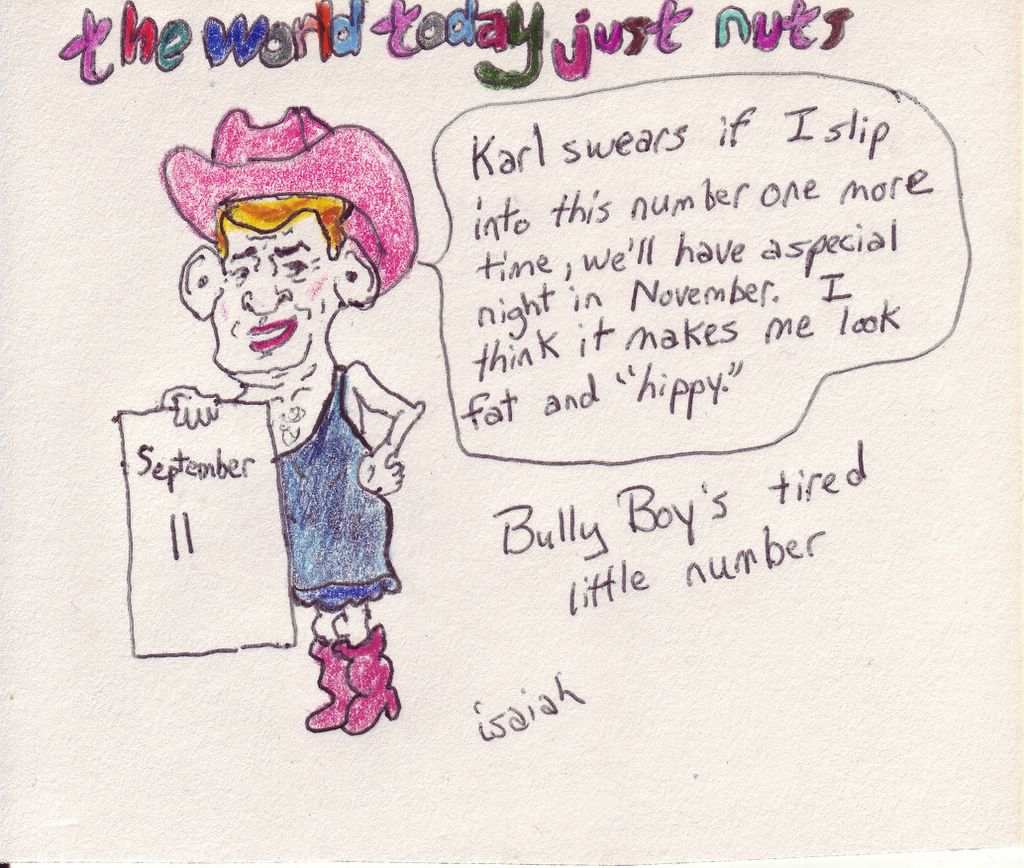 To the left is Isaiah's "Bully Boy's tired little number" which I enjoyed (especially the rosy cheeks). It also made me think of how much I hate the GAP ads. Audrey Hepburn was a little too stylish to wear the CRAP from GAP, most of which is made by child labor. In it's own way, the trashy ad is perfect. The GAP uses children and other underpaid workers in sweat shops to make their clothes and to sell them they use the legacy of a dead woman. They don't do a thing themselves.

Before I forget, as I did yesterday, please visit Mikey Likes It! for Mike's thoughts. I think there's a theme of justice for this post. There's no justice in the clothes at the GAP (or in using Audrey Hepburn's classy image to peddle their wares).

"Ex-Commander Talks at Abu Ghraib Hearing" (Associated Press via Common Dreams):
Fort Meade, Maryland - An Army Reserve officer accused of ignoring abuses of Iraqi detainees at Abu Ghraib prison was a daily visitor to the "hard site," where some detainees were stripped naked as an interrogation technique, a former military police commander testified Wednesday.
Capt. Donald Reese's testimony supported government allegations that Lt. Col. Steven L. Jordan, as director of the prison's interrogation center, knew about the abuse and lied about it.
Reese testified on the third day of Jordan's Article 32 investigation, the military equivalent of a grand jury hearing. The hearing to determine whether Jordan, the highest-ranking soldier charged in the scandal, should be court-martialed for any of the 12 charges he faces. He could face up to 42 years in prison if convicted.
Reese was commander of the 372nd Military Police Company, which guarded the hard site at Abu Ghraib in the autumn of 2003, when most of the abuses documented in photographs seen around the world occurred.
Prosecutor Lt. Col. Jon Pavlovcak asked him Wednesday how often he had seen Jordan inside the hard site, a building that housed prisoners held for interrogation.
"Every day, sir," Reese replied.

That's staying with the theme of justice. The lower level ones are the only ones who have been punished so far. It's past time that the abuses were charted on up through the chain. If you remember Lynndie England and have wondered what's up in her life (prison), you can read Tara McKelvey's "A Soldier's Tale" (Marie Claire). Have you thought about Abu Ghraib much lately? That was exposed in 2004. It's now 2006. Our elected officials decided we weren't grown up enough to see all the photos but they want to tell us that we've seen the worst of them or that there's nothing to be concerned about. Along with that, we've heard dismissals that it was just "a few bad apples," that the actions were just "fun and games" or "sex play." In fact, one of the biggest defenders of the abuses at Abu Ghraib wasn't in the Congress. Where was he?
On your TV screens if you're not smart enough to turn off CSI: NY. That is such a disgusting show (click here for Ava and C.I.'s review of it) and that has a great deal to do with the Abu Ghraib defender Gary Sinise.

"Shame on Us All" (Robert Parry, Consortium News):
History should record October 17, 2006, as the reverse of July 4, 1776.
From the noble American ideal of each human being possessing "unalienable rights" as declared by the Founders 230 years ago amid the ringing of bells in Philadelphia, the United States effectively rescinded that concept on a dreary fall day in Washington.
At a crimped ceremony in the East Room of the White House, President George W. Bush signed the Military Commissions Act of 2006 while sitting behind a sign reading "Protecting America."
On the surface, the law sets standards for harsh interrogations, prosecutions and executions of supposed terrorists and other "unlawful combatants," including al-Qaeda members who allegedly conspired to murder nearly 3,000 people on Sept. 11, 2001.
"It is a rare occasion when a President can sign a bill he knows will save American lives," Bush said. "I have that privilege this morning."
But the new law does much more. In effect, it creates a parallel "star chamber" system of criminal justice for anyone, including an American citizen, who is suspected of engaging in, contributing to or acting in support of violent acts directed against the U.S. government or its allies anywhere on earth.

Gary Sinise could probably defend the death of democracy, the death of rule of law. Robert Parry is right, it is a dark day and we should all be ashamed.

"Iraq snapshot" (The Common Ills):
Wednesday, October 18, 2006. Chaos and violence continue in Iraq; Wednesday begins with the news of ten more US toops dying (on Tuesday) in Iraq; step back, Tricia, Bully Boy's now the Littlest Nixon; while Bully Boy gets cover the Poodle and the Puppet stumble; and the so-called coalition of the willing continues to dwindle.
Reuters reports that Slovakia will be leaving the coalition and taking all but 11 of their 110 troops with them and quotes Robert Fico (prime minister) stating, "Slovak soldiers can start packing their stuff because they have to be home in Feburary 2007".

Their eyes are all asking
Are you in, or are you out
And I think, oh man,
What is this about?
-- "In or Out" written by Ani DiFranco