Stevie Nicks' "For What It's Worth"

We're still in the midst of the pandemic.  It hasn't gone away.  It's probably about to get worse.

Not a happy thought.  But I was thinking about this today and wondering what song I thought provided comfort in this period?

I'd say Stevie Nicks' "For What It's Worth."

If you were doing a playlist to help someone through this pandemic, what song would you put on it?

President Joseph R. Biden, Jr. met today with Prime Minister Al-Kadhimi of Iraq to strengthen bilateral coordination under the Strategic Framework Agreement.  Together they discussed expanded initiatives on climate, energy, education, and combatting the COVID-19 pandemic.  They committed to a continued security partnership to ensure that ISIS can never resurge and to allow communities recovering from terror to rebuild with dignity even as the United States shifts to a purely advisory role. The leaders reaffirmed their respect for Iraq’s democracy, the rule of law, and promoting a secure environment for Iraq’s upcoming elections in October. The leaders agreed on the vital importance of holding these elections on time, and welcomed the UN monitoring mission to support their full transparency and fairness.

Together, they discussed the important role of Iraq in the region and the significant diplomatic efforts led by Prime Minister Al-Kadhimi to improve and strengthen Iraq’s relationships in the region.  They lauded the historic visit of Pope Francis to Iraq earlier this year, the trilateral summit with Egypt and Jordan, and the important role Iraq plays in promoting interfaith tolerance and the common bonds of humanity in the Middle East.  They agreed that Iraq’s stability was central to the stability of the entire region.

Today, I met with Prime Minister Mustafa Al-Kadhimi of Iraq in the Oval Office. We reaffirmed our commitment to expand cooperation through new initiatives focused on education, health, and climate as well as support for Iraq’s democracy and strengthened rule of law. 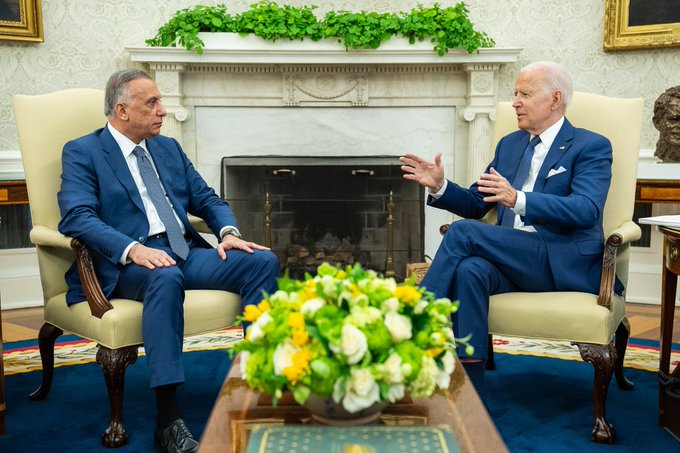 Yesterday, US President Joe Biden met with Iraqi Prime Minister Mustafa al-Kadhimi.  It was the rollout for Mustafa's re-election campaign.  As AFP observed this week, Mustafa is a "weakened leader."  He's a failure who has been a gross disappointment. He came into office promising early elections and insisting that he'd serve one brief term.  Now he wants a second term.

He failed at everything.  You could even argue that he failed at early elections.  Elections were supposed to take place right away, he was supposed to be sworn in and begin the process.  Grasp that Adil Abdul-Mahdi was run out of office because of his inability to address the needs of the Iraqi people.  Also grasp that the election that brought Adil to power took place in 2018.  In October, 'early' elections are supposed to take place.  That's over three years later -- two more months of postponing and they'd be four years later.  Which is pretty much what the cycle already was.

Mustafa is a failure.

The Iraqi militias ignore him unless they're trying to intimidate him -- like storming the Green Zone and circling his compound.  They make public remarks insulting him and accusing him of treason, etc.  Grasp that these militias are part of the Iraqi forces -- officially.  And that they are supposed to be under the command of the prime minister.  But they aren't.

He can't deliver electricity.  Potable water?  Another summer where Iraqis are being told in some areas to boil water before drinking it.  No jobs.  No protections.  No acknowledgment of COVID 19 -- students have complained about the exams -- specifically, the inability to social distance.  Activists are assassinated and no one is ever put in prison.

He's been to Iran, Egypt, Saudi Arabia, etc, in recent weeks.  He's attempting to pose as a leader in the hopes that this will garner him votes.  Leaders in the protest movement have stated that they will sit it out and so has Shi'ite cleric Moqtada al-Sadr.  Nouri al-Maliki, Iraq's former prime minister and forever thug, remains a formidable rival.

Is a photo op really supposed to change all of this?

A photo op and a lie?

US forces aren't leaving Iraq.  And Barack Obama publicly sent them back in when Joe Biden was Vice President.  He didn't call it combat, if you missed it.  This was a security mission.  But now that weasel word "combat troops" is yet again being used.  A number of us remember calling out Barack during his second term because he kept denying they were combat troops.  We'd note, for example, that a US service member in a plane carrying out a bombing mission was engaging in combat.

How meaningless are the statements from Mustafa and Joe?

We’ve done so while bringing more than 140,000 American troops home from Iraq, and drawing down our forces in Afghanistan, where our combat mission will end later this year.  Thanks to our military and counterterrorism professionals, America is safer.

It's all word games and distractions,

Ruth Sherlock, yesterday on NPR, managed to get in some truths -- a rare thing for US journalism.  We noted her report yesterday but we'll again note it today.  Nothing is changing, per the military brass she spoke with and "Analysts say this is actually more about politics and diplomacy than any real change on the ground for now.  They see this as almost window dressing to help the Iraqi prime minister with domestic politics back in Iraq."

These are basics.  And it's not just the corporate press that can't note them, read the garbage Dave DeCamp's written for ANTIWAR.COM -- no link, not linking to lies.  See Saturday's "Lies don't help anyone" which addresses some of the big lies in ANTIWAR.COM's coverage of Iraq.  I'm not in the mood to rehash and, yes, he's still misleading people about the vote in Parliament.

Once upon a time, people pretended to care about Iraq.  There was a lot of money to be made in pretending.  Ask Amy Goodman who used it to sell books (yes, briefly, she was able to sell those clip-jobs) and herself.  Ask any of them.  They all made money off the war while decrying the money made by the weapons industry.  PACIFICA RADIO raised millions off the Iraq War.  They blew the money -- on whores like Amy Goodman who does not dserve the millions she gets and especially does not deserve them if PACIFICA does not own the final product (and they don't, think closet case Leslie Cagan for that and wonder how she got away with misuing her board position and especially wonder why, since we all know about it, I'm the only one who can ever call her out publicly).  They'd offer a film 'about' Iraq or  book or this or that and they'd pretend the war was appalling and had to be stopped.  PRetend until their boredom was too much.

That is what happened.

The war did not end but their interest in it did.

Iraqis continue to suffer because of the 2003 US-led invasion.  But watch everyone pretend, day after day, that there are so many other, more important things to address.

Like a certain singer?  I'm glad so many people are such experts on mental health.  That was sarcasm.  I really think this playing out in the courts means that it has a chance of fairness and we don't need the press 'oversight' of a woman's troubles.  I really think the world could back the hell off right now and stop obsessing over her.  I think Ronan's TMZ posts demonstrate that he was never really a journalist.  Her 911 call?  We needed to know about that?  She had no right to privacy regarding that?  THE NEW YORKER has no standards, clearly.

It's so poorly covered that we still get e-mails accusing me of covering it because I love "those Sunnis" protesting.  I don't have a problem with the Sunni people and they are victimized in Iraq.  Deborah Amos wrote a whole book about that -- one of the best books written on Iraq by an American author.  But The October Revolution is a Shi'ite led movement.

Yet people honestly confuse the movement with a Sunni movement because there's so little coverage of it for US news consumers.  You get more coverage about the bi-sexual actor and the lesbian actress pretending that they're getting back together to get headlines than you do about the Iraqi people.

The press fails us -- All Things Media Big and Small.  They can preach their agendas, they just can't cover reality.  They can misuse their positions and betray their profession, they just can't, you know, report.  It's too hard for them.  Not a new development in the US press but the consolidation craze has meant fewer and fewer outlets so less and less chance of reality.  Now you have YOUTUBE and others censoring speech.  Less and less chance of reality getting out or of actual reporting being done.

Where is anyone noting in the JOE BIDEN ENDS COMBAT MISSIONS IN IRAQ! hysteria noting that he was vice president when Barack did the same thing?

That's why the mission in Iraq switched from DoD to the State Dept or do we all not remember that as well?

There's no context, there's no analysis and we won't get it from the corporate media or from Pandhandle Media (media's that always got their hands in your pocket begging for 'donations')

Ashford & Simpson's "Til We Get It Right" first appeared on their album LOVE OR PHYSICAL.

We'll close with this from Restore The Fourth:

It's legal for NSA to vacuum up billions of communications a year without a warrant, including "incidental" collection on Americans who are one or two "hops" from a target. Those Americans could be a journalist writing on terrorism, an immigration lawyer, a Catholic priest opposed to legal abortion, or an organizer of pipeline protests in touch with people in Canada; we don't know, and NSA won't tell.

Congress declared this gigantic warrantless suck-machine legal because it was for "foreign intelligence collection purposes" and therefore, they reasoned, shouldn't be subject to the same Fourth Amendment constraints.

The FBI started wondering about what was in that massive data mountain. After 9/11, the FBI asked for, and got, permission to dip into NSA data for evidence of federal crimes - again, no warrant required. So the Bush administration loosened the rules, and eventually the Obama administration gave them pretty much free access, trusting to the FBI's discretion. Critics call these searches "FBI backdoor searches."

The secretive FISA Court revealed in 2019 that the FBI was taking this dipping a little far. In fact, the FBI accesses NSA data on Americans over three million times a year. And, thanks to "parallel construction", criminal defendants typically never know that the evidence against them originates with a warrantless search of NSA data. The Court could have imposed penalties, or barred them from doing this altogether, but chose not to.

That leaves Congress. And for the first time in years, members of Congress have introduced an amendment to an appropriations bill to prohibit such searches without a warrant. The cosponsors, Reps. Zoe Lofgren (D-CA), Thomas Massie (R-KY), Pramila Jayapal (D-WA), and Warren Davidson (R-OH), differ greatly in their politics, but come together in their concern about this issue. The House passed versions of this prohibition in 2014 and 2015, and failed to pass one in 2016. Now, for the first time since 2016, we have another shot.

The floor vote on the Commerce Appropriations bill is currently expected for Thursday. Before then, please call, email or tweet at your member of Congress, urging them to vote Yes on this amendment.

Here's our coalition letter on the topic that is going out to Congressmembers: