My birthday is August 7, sandwiched between the anniversary dates for the bombings of Hiroshima and Nagasaki (on August 6 and August 9, 1945, respectively). I was six years old when the first bomb fell. My course in life was predetermined.

On September 2, 1945, when the local fire siren suddenly blared, my teacher asked, “What is that?” and I knew: The war was over.

It had been a really scary time in Melbourne, Australia, as the Japanese had threatened to invade us. Dad dug an air-raid shelter in our back garden, and the windows were blacked out while the city’s searchlights scanned the skies at night.

Elated, I walked home on that lovely sunny afternoon picking flowers along the way. It would be years later before I learned the awful truth about how the war ended.

What rained down on those two Japanese cities seventy-five years ago was destruction on a scale never seen before or since. People exposed within half a mile of the atomic fireball were seared to piles of smoking char in a fraction of a second as their internal organs boiled away. The small black bundles stuck to the streets and bridges and sidewalks of Hiroshima numbered in the thousands.

A little boy was reaching up to catch a red dragonfly with his hand against the blue sky when there was a blinding flash and he disappeared. He turned into gas and left his shadow behind on the pavement, a haunting relic later moved to the Hiroshima Museum. A woman was running while holding her baby; she and the baby were turned into a charcoal statue.

In all, about 120,000 people were killed immediately by the two bombs, and tens of thousands more died later due to radiation exposure.

IOM Iraq
IOM #Iraq is rehabilitating the only water treatment plant in Al-Qurna district, #Basra governorate, with funding from
@qcharity

. The project will give 100K people access to drinking water, and improve the livelihoods of local communities. 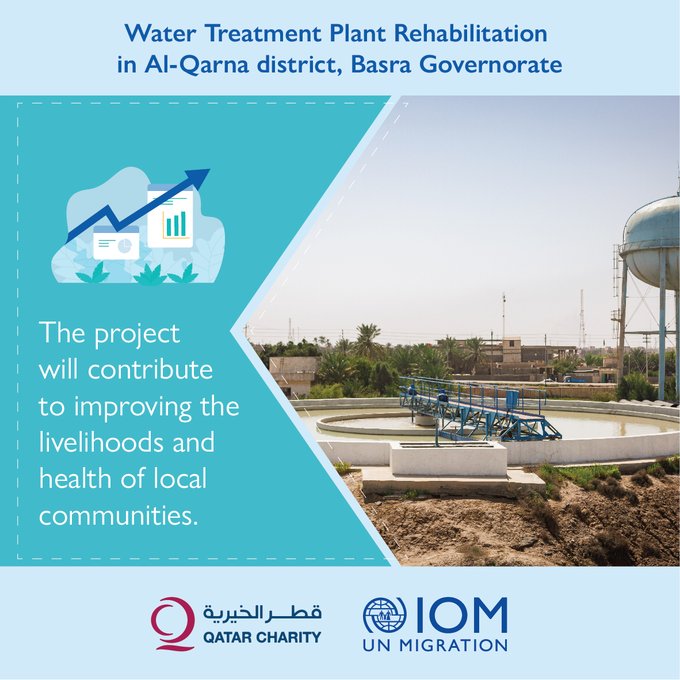 IOM MENA and 2 others
Protesters are being killed.  There is no political consensus behind the new prime minister.  Go down the list, by no means is Iraq "getting back on track."  Bobby Gosh (GULF NEWS for this link, we highlighted this yesterday at BLOOMBERG NEWS) observed this week:
All the crises he inherited have deepened. The coronavirus pandemic, already alarming when Kadhimi was sworn in, has since only grown more frightening, forcing him to announce fresh lockdowns.

The Iraqi economy, having suffered extensive collateral damage from the oil war, has weakened. Powerful, Iran-backed militias have grown more brazen. Corruption, already ingrained in the body politic, seems to have metastasised across every aspect of the state.

Even the weather has been worse than expected. Iraq is now wilting in the hottest summer ever recorded, with temperatures nearing 52 degrees Celsius (125 Fahrenheit) in Baghdad and 53C (127F) in Basra last week.

The heat threatens to bring the protests against electricity and water shortages — a summer fixture in the Iraqi political calendar — to a fever pitch. Some demonstrations in Baghdad have already boiled over into clashes with security forces: Two protesters were killed last Monday.

On the protesters, how telling that the same week the world learned of the kidnapping and torture of 16-year-old Hamid Saeed by Iraqi forces, O'Hanlon would show up to insist that Iraq was back on track.  How telling and how typical.  Mina Aldbroubi of THE NATIONAL Tweets:
Iraq arrests security forces over assault on teenager Hamid Saeed https://thenational.ae/world/mena/iraq-arrests-security-forces-over-assault-on-teenager-hamid-saeed-1.1058281
via
@TheNationalUAE

Iraq arrests security forces over assault on teenager Hamid Saeed
A 16-year-old boy was subjected to ‘immoral and unlawful attacks’, the prime minister said
For more on Saeed, see:
INDIA BLOOMS notes another rocket attack on the Green Zone yesterday.  But, hey, O'Hanlon says back on track!
In last Saturday's "Kadhimi wants to push back elections longer than necessary," we noted that Mustafa al-Kadhimi has announced early elections. They will take place, he said, in June of 2021.  As we noted, Iraq does not need that long to prepare for parliamentary elections.  They have done it in much less time -- look at the fall of 2009 and all the hand wringing that it would delay elections yet they still took place in March of 2010.  Jasper Hamann (MOROCCO WORLD NEWS) writes:

The political blocs that stand to lose in new elections will have sufficient incentive to try to stall them. Nahrain University Political Science Professor Yaseen al-Bakri told Al Monitor that “they want the current parliamentary term to be completed and avoid going to early elections because they are well aware of the little chances they have in the early elections.”

Stalling the electoral process could be as easy as hampering progress towards the establishment of a new electoral law. While parliament has passed the law, it has not sent the law to the president for approval because of disagreements between parliament’s rival factions.

Who are these unnamed political blocs?
And does he mean stall in Parliament?
The stall has traditionally come from one of Iraq's vice presidents -- they have multiple vice presidents.  Often, it is over something like the issue of the displaced and the refugees and are provisions made to allow them to vote?
The law is not sent to the president, it's sent to the the three presidencies.  That includes the Vice Presidents.  I really think something has happened in the last years.  Either out of ignorance or out of a desire to elevate the office of the president of Iraq, journalists keep pretending that the highest position in Iraq is the president.  The presidency was given to the Kurds.  It is a ceremonial position.  If it had true power, you can be sure that Shi'ite majority Iraq would never have given the post to the Kurds.
News out of Kurdistan this morning is of the death of a prominent political figure.  RUDAW reports:
A prominent Kurdish nationalist from Iran has died in Sulaimani on Thursday after a battle with COVID-19.

Jalil Gadani, a long-time member of the Kurdistan Democratic Party of Iran (KDPI), passed away at Hiwa hospital in the Kurdistan Region’s eastern city on Thursday after being in intensive care for almost a week, according to an official statement published by the group on Thursday.

Gadani, who has been involved in Kurdish Iranian politics for more than six decades, split from the KDPI in 2006 with a number of senior members to form the splinter group called Kurdistan Democratic Party (KDP-Iran). He held senior positions in both parties for decades.

"Jalil Gadani was a book that was written over a 60 years period, my condolences to the Kurdish people," said Facebook user Hassan Ahmed.
While Michael O'Hanlon is praising Iraq as 'back on track,' Halgurd Sherwani (KURDISTAN 24) reports a disturbing incident that took place on Sunday:

On Sunday, Iraqi security forces detained a Kurdistan 24 team that was covering a clash between Kurdish villagers and several Arab families in the disputed Kirkuk province.

The incident occurred in the Guli Tapa village in southern parts of Kirkuk, where a confrontation ensued over land-ownership disputes. Shortly after, a Kurdistan 24 media team, made up of a reporter and a cameraman, arrived on the scene.

Local Kurds in Daquq district, where Guli Tapa is located, claimed that the Iraqi Federal Police had supported Arab families coming and attempting to take over lands Kurds own.

Upon arrival, "we were detained by a unit of Iraq's Federal Police for three hours in a window-tinted car," said Soran Kamaran, Kurdistan 24's reporter in Kirkuk province. Kurdistan 24 cameraman Nawzad Mohammad was accompanying Kamaran.

"We were told [by the security forces] that they do not allow such incidents to be reported," Kamaran said. He added that the police unit also confiscated their equipment and still hold on to them.

Syrian journalist Richard Medhurst Tweets:
There are entire generations of kids in Iraq, Afghanistan, Syria, Libya who have known nothing but war their entire lives. They've grown up with PTSD, anxiety, depression because of Obama. No one talks about the toll on their mental health. Are they not human? Don't they matter?
New content at THIRD:
The following sites updated:
"
Posted by Elaine at 10:22 PM