Does Joe Biden love pedophiles because he relates to them? Just asking.

F**k Alyssa Milano and any other woman (or man, for that matter) who defends Joe Biden.

resting witch face‏ @girlziplocked Oct 30
There's a universe of rich white men who enabled Jeffrey Epstein every single step of the way, who knew what he was doing and just turned a blind eye to it and one is Larry Summers and I don't understand how that man has never faced a single consequence in his entire idiot life.
2 replies11 retweets57 likes
Show this thread

There is no excuse for this so don't try to make one. It's disgusting and it proves that Joe Biden is not now and never will be ready to be president.


In the US, the race for the Democratic Party's presidential nomination continues.  The press favorite, War Hawk Joe Biden, remains tone deaf and the press continues to avoid addressing the very real problems with Joe.

Replying to @PaulDeCristofo4
Alyssa Milano complains (rightfully) about sexism in Hollywood and then hosts a fundraiser for Joe Biden, a man who inappropriately fondles little girls and women, a man who talks down to women and treats them as if they are idiots?!? Milano is full of sh*t! Biden is a pig.


That is Joe's image.  Is he trying to improve it?


Earlier this week, Cedric ("Joe wants your vote but he doesn't want to interact with you"), Wally ("THIS JUST IN! WORTHLESS JOE BIDEN INSULTS YOUNG VOTERS!") and Ann ("Neither Joe Biden nor Alyssa Milano give a damn about women") addressed this issue of Joe's interaction with Lily Levin.  Lily had concerns about climate change.  Joe responded to this prospective supporter (and you can be sure she will be voting -- not for Joe, though) by responding, "Look at my record, child."

An adult woman, a voter, asks a question and he dismisses her as a "child."  What's next?  New Corn Pop stories where Corn Pop's a "boy"?

Joe's a sexist pig.  He didn't just fail Anita Hill, according to the recent remarks of what he told Republican senators in real time, he worked to actively undermine her.

As Anita's noted, he needs to take accountability.

He's a sexist pig who belongs on a rocker on the front porch, not in the Oval Office.

As the Joe Biden campaign mounts its opposition to a new Medicare for All financing plan rolled out by Sen. Elizabeth Warren, it is directing reporters to former Obama adviser Larry Summers for his bits of wisdom, according to an email obtained by The Intercept.
[. . .]
Summers’s lifelong dream of chairing the Federal Reserve — a position he was promised in exchange for agreeing to serve as a senior economic adviser — was thwarted in 2013 by a bloc of progressive-populist senators on the Banking Committee, with Warren playing a lead role internally. Warren helped organize an outside coalition of Summers opponents, including organized labor and women’s groups, while her ally, Sen. Jeff Merkley, D-Ore., made the public case against him. Once Merkley and Warren locked up five votes on the committee, Summers had no path to confirmation and withdrew his name. He may be most well-known as an advocate of financial deregulation while serving in the Clinton administration.
According to the email, which The Intercept agreed not to publish to protect the source, the Biden campaign is making Summers available to speak on Warren’s health care plan, which Biden attacked on Friday. Summers, through a spokesperson, declined to comment. “We provided contact information for a number of healthcare and economic policy experts — all of whom have relevant backgrounds in government, academia, or both but none of whom are surrogates for the campaign — and he was one of them,” said a Biden campaign spokesperson.

It's hard not to scream.

About the whole f**king system.

So here we are and I don't know what to call it, to steal from Maria McKee.

Where are the women or the men who are aware because I'm scanning the horizon and I'm not seeing it.

I'm not seeing any improvement from 2008.

Where is the media?

In a 2003 Vanity Fair article that referred to “the Epstein Program for Mathematical Biology and Evolutionary Dynamics” at Harvard, Epstein said he was reluctant to have his name attached to the program, but Harvard President Larry Summers “persuaded” him.

Former Harvard president and secretary of the treasury Larry Summers boasted a close relationship with Epstein: the two served on multiple foreign relations advisory panels together, and their friendship was detailed at length in a glowing Harvard Crimson profile of Epstein, who had just donated $30 million to the university. Summers and other former Harvard officials who had close ties to Epstein declined to comment for a 2018 follow-up piece on Epstein following the publication of the Miami Herald report.

Claim to fame: Former president of Harvard, former Clinton treasury secretary
Connection: A Harvard Crimson article from 2003 noted that Epstein shared “a special connection” with Summers, adding that “their friendship began a number of years ago—before Summers became Harvard’s president and even before he was the Secretary of the Treasury—and those close to Epstein say he holds the University president in very high regard.” Epstein pledged $30 million for Harvard to create the Epstein Program for Mathematical Biology and Evolutionary Dynamics, though he only agreed to have his name attached after being persuaded by Summers himself. Appears in Lolita Express flight logs, and, according to the Daily Beast, Epstein’s private charity also “funded a nonprofit that produces a TV show hosted by the wife of Larry Summers.”
On Epstein: As far as I can tell, Summers has never commented on his relationship with Epstein.

How was this not the lede the minute Joe tapped Larry to respond for his campaign?

Does it not matter, Ryan Grim?

I don't understand how your brain works.

Because when I read that Joe's using Larry, my immediate thought is: Child molester.  Pedophile.

Where's the proof of that?

And Epstein died in custody August 10th.  It's only November.

In what world is it appropriate for any political campaign to be pulling Larry in?  Let alone a sexist and tone deaf campaign?

This is outrageous.  Or does it not matter when young girls are raped?

Are we still stuck in last century thinking?

Where is the press?

This is not a minor issue.  Lawrence is being presented to the press to offer expert defense of Joe Biden.  Larry is not an expert.  His entire name and image is muddled.  His own actions have made that so.  The notion that he's worth listening to is outrageous.

Larry's  a whole ball of wax of problematic.   Women can't do science, it's genetic -- remember when Larry floated that crap?  If not, here's a 2015 PRI report.  To Ryan Grimm's credit, he is aware of that and notes it -- in the final sentence of the report: "After all, he was fired as Harvard University president after speculating in prepared remarks that women are less equipped to do math and science than men."

That should have been the focus of the report.  Larry is a sexist pig, Larry was side-by-side with convicted pedophile Jeffrey Epstein and did his ride-or-die with Jeffrey on The Lolita Express.

Not only should no one be listening to Larry, the story should be, "Look at how desperate Joe Biden is.  He's so desperate and he hates women so much, that he's using this guy to attack Elizabeth Warren."

Joe's past choices -- betraying Anita Hill, destroying Iraq (both with his vote for the war and his actions when Barack put him in charge from 2009 through the end of 2016), the crime bill, the crackdown on consumers to make them debt slaves to banks forever, etc -- scream that he is not qualified to be president.  His actions since declaring this latest run go to his refusal to learn from any of his past mistakes.

If Larry Summers is your go to, the press should be calling you out.  If they're not?  I guess they're okay with pedophiles and that's why so many get away with it -- the press doesn't really see it as a problem.

Joe's moral compass appears to be on the fritz.

He's not fit to be president.  No one running for the presidency this year should be associating with anyone who took a ride on The Lolita Express -- it's bad optics, it's bad politics and it is disgusting and unseemly.

Anti-government protests that started in Iraq over a month ago have escalated into countrywide violence and demands for the government to resign. Some 270 people have lost their lives.


The US Embassy in Baghdad issued the following earlier today:

The United States has a strong and abiding interest in a secure and prosperous Iraq able to defend the nation against violent extremist groups and able to deter those who would undermine Iraqi sovereignty and democracy.  As the world watches events in Iraq unfold it is increasingly clear that the Government of Iraq and the country’s political leaders must engage seriously and urgently with Iraqi citizens who are demanding reform. There is no path forward based on suppression of the will of the Iraqi people.
We deplore the killing and kidnapping of unarmed protesters, threats to freedom of expression, and the cycle of violence taking place. Iraqis must be free to make their own choices about the future of their nation.

Let's note it's the strongest statement the US government has ever made in defense of the Iraqi people protesting -- that includes the 2011 protesters.  That includes 2013 protesters and let's note their banner. 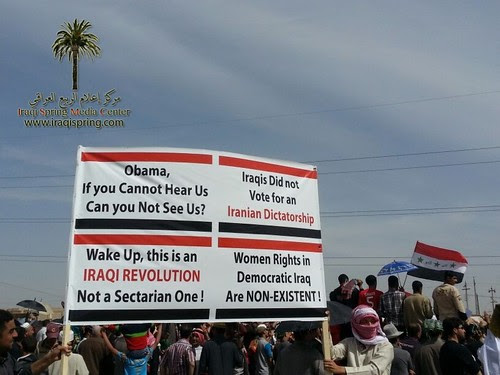 Iraqis in Samarra with a message for the world (photo via Iraqi Spring MC).

"As the world watches"?  That's what the statement issued today says.

AP wants you to know that there is a long simmering rage against Iran in Iraq.  Is that really a surprise?  Look at the 2013 banner: "Iraqis Did not Vote for an Iranian Dictatorship."

It's always been there.

There's more than anger between Iraq and Iran.  There's also bonds of support.

But as we've repeatedly noted, the fear that Iran will be in charge of Iraq has never been a valid one.  They are neighbors.  That brings associations and, due to their past, it brings friction.

Smart approaches would include just standing back, not trying to influence anything between the two.  Moqtada al-Sadr is now not just a Shi'ite cleric but also a movement leader.  Part of that is due to his work.  Part of it is due to the US.  Condi Rice felt the need to empower him repeatedly.  He would be fading and then Condi would need to attack him and that would make some Iraqis rally behind him.  If she wanted him to fade away, she should have kept her mouth shut instead of constantly elevating him to leadership with her attacks.

The same thing is true of the US with regards to Iran.

Trina wanted me to note this and I'm moving quickly and hoping everyone (community members) can remember what I was saying before about this in the community newsletter.  But the reality is that the press whips up sentiment and often the US press does so in a way that harms others.  They have been pushing so hard for war on Iran.

If it helps any, grasp that they're so stupid.  They can't even provide details that help them.

They're lazy so they write about the protest as though it started in October.

They ignore what really kicked it off: The firing of someone because the Iranian-linked militias wanted him fired.  That's a key detail.  And if you're pimping war on Iran, you should probably have been including it.  But that's how useless and stupid they are, they missed that reality.