Marianne Williamson is running for the Democratic Party's presidential nomination.

Vote for whomever you want -- or don't vote, it's your choice.  But please be aware that we have a lot of people running right now.

Monday, March 11, 2019.  Will the Democrats finally field a presidential ticket without someone who voted for the Iraq War on it, why is THE GUARDIAN offering a b.s. story about a crime that protects and hides the criminal, and much more.

Keith Ellison‏Verified account @keithellison
I want to know where Dem Primary Candidates stand, and have stood, on criminal justice, student loans, climate, wages, health care, trade policy, bank regulation, the Iraq War. Issues and not personality will determine who I support. What about you?
12:25 PM - 10 Mar 2019
144 replies235 retweets1,185 likes


It's a solid approach but it underscores something.  2020 could be the first election since the start of the Iraq War where no one on the Democratic Party ticket supported the Iraq War.

2016: Hillary Clinton and the forgettable Tim Kaine -- Hillary voted for the Iraq War.

Four presidential elections since the start of the Iraq War -- the ongoing Iraq War -- and every time the party has offered and Iraq War supporter.

Get the feeling you aren't listened to?  Because you aren't.

In November of 2020, he'll be 78.  What's he going to do? Steal from old crusty Dianne Feinstein and use his position to attack children?

Cranky old Dianne can't inspire children, she can't even listen to them.  She knows who lines her pockets.  From Branko Marcetic (IN THESE TIMES):


On February 22, footage of Sen. Dianne Feinstein (D-Calif.) lecturing pleading children about her opposition to Alexandria Ocasio-Cortez and Ed Markey's Green New Deal resolution went viral. Several media commentatorson both sides of the debate cast the video of the 85-year-old senator dressing down the children as a case of generational conflict.
But the episode was also a reminder of the peril of wealth inequality in politics, with Feinstein, one of the very wealthiest members of Congress, having a personal financial stake in industries whose bottom lines would be threatened by the measures in the Green New Deal resolution.
Feinstein, whose net worth stands at $58.5 million, has been married for nearly 40 years to Richard C. Blum, a wealthy investor who still runs the private equity firm he founded in 1975, Richard C. Blum & Associates, Inc. According to Feinstein's most recent financial annual report, filed in May 2018 and covering the 2017 calendar year, Blum owns 100 percent of Yosemite Investments LLC, through which he has hundreds of thousands of dollars invested in several fossil fuel companies, some of which he has sold off since the Green New Deal began gaining increasing national attention.
According to an amendment filed in January, Blum in August 2017 invested more than $1 million in the Osterweis Strategic Income Fund, a mutual fund run by investment firm Osterweis Capital Management. Among Osterweis’s top ten holdingsare logistics firm XPO, a subsidiary of methanol producer Consolidated Energy Limited, a subsidiary of commercial aircraft leaser Avation PLC, and mining company Teck Resources, which holds interests in a number of different oil sands projects across the border in Canada, including the controversial Frontier project.


Like Dianne, Joe carries a lot of baggage.  That includes his voting history.  It also includes moments the press minimized or ignored.  For example, in 2008, in New Hampshire, Hillary's eyes welled and the press distorted that moment -- especially Bill Moyers (Ava and I covered his distortions repeatedly at THIRD) -- but months later when Joe Biden honestly cried, just started letting the tears flow, at a rally, the press acted as if it didn't happen.  We had weeks of what Bill Moyers snidely labeled Hillary's "moisty moment" but there was never any discussion of how weird it was for Joe Biden to sob in public in the  middle of a rally.

Those passes will not exist if he runs in 2020.

Some would argue Joe Biden -- at least when not crying -- is a fighter.  He has fought.  For example, he fought against Anita Hill when she came forward about being harassed by Clarence Thomas.  He fought for the Iraq War.  For the American people?

i slurped the sheriff‏ @MesseeJesse 19h19 hours ago
Replying to @_M_Cotton @TheRadicalDream @NateSilver538
Opposing desegregation in Delaware in the 70s, championing a tough on crime stance in the 90s, voting for the Iraq War, various racist comments (see below)
1 reply0 retweets0 likes

Here's the video that's not showing up above.


Go away, @JoeBiden You seem like a nice guy, but talk about baggage: Anita Hill Iraq War Vote Violent Crime Control Act Videos galore of touchy-feely with women ... AND we DO NOT need a moderate running against the Orange Mobster!
0 replies0 retweets1 like

Patrick Coyle‏ @PatrickCoyle25 Mar 7
ibtimes.com/joe-biden-back… what's not to love about a guy who voted for the Iraq War, referred to the 1994 mandatory minimums tough on crime bill as "the Biden Bill", and is one of the main reasons you can't discharge student loan debt in bankruptcy!
0 replies1 retweet0 likes


Anyone who wants to run should run.  We need more choices, not fewer.

But there needs to be honesty in the process.

Honesty is stating that Joe Biden has no chance of winning.

Historically, that is the case.  Vice presidents do not take four years out of office and then return as their party's presidential candidate and then win the election.  When has that happened?

Richard Nixon did wait eight years and win but there were many factors at play there including eight years of Democrats in office.

The best example/reference for a Joe Biden run is 1984.  On the left, we were convinced that Ronald Reagan was so impaired everyone could see it.  His supporters couldn't.  They stood with him -- as Donald Trump's will.  An exciting race could have led to a Democrat win.  But we didn't have an exciting candidate.  We had Walter Mondale.  Vice president from 1977 to 1981 under Jimmy Carter.

Gary Hart was the candidate who generated excitement that year on the Democratic side but we went with dull and drab Walter.

Ronald Reagan's supporters were only more entrenched in 1984 and the same will be true of Donald's in 2020.  If you're going to defeat Donald, you need a candidate who generates excitement, new visions, new vistas.  The same-old, same-old will not defeat Donald Trump.

"But he's so awful!"  Similar cries were made of Ronald Reagan.

Joe Biden is yesterday.  He can't lead the party into the future.

Some will immediately point out that Bernie Sanders is older than Joe Biden.  He is.  He also generates excitement which Joe Biden has never done.

We didn't note this story yesterday and a lot of people were upset.

It's a bulls**t story.  Dalya Alberge should be embarrassed to have written it and THE GUARDIAN should be ashamed to have published it.  Did no one read that story closely?

A Border Force officer saw a cuneiform stone and was suspicious.  Turns out it was stolen from Iraq.

WTF.  I really can't grasp the stupidity of some people.

I try to be nice and realize that the media manipulates us.  But you're reading the same story I am.  Possibly, you even read this rewrite of THE GUARDIAN story.

What's missing from the story -- what important detail?

Why is THE GUARDIAN protecting a thief?

It didn't steal itself.  They want to tie a bow around it and act like everything's fine because the stone is headed back to Iraq.

Someone deliberately stole that and there should be charges filed and this person, who broke the law, should have their name attached to this story.

Why are they being protected?

And THE GUARDIAN damn well knows they're protecting someone.  This fluff that Alberge offered ignored the basics of Who What Where and When.

It's as though they wrote of a murder without ever noting who the police arrested for the crime.

It's a bulls**t story and a functioning press would be calling it out themselves.

In other news, THE TEHRAN TIMES reports:


President Hassan Rouhani of Iran arrived in Baghdad on Monday for a three-day official visit.
He was welcomed by Iraqi President Barham Salih.
The visit by Rouhani is considered a milestone in ties between Iran and Iraq at the current juncture in history.

Iran's President Hassan Rouhani arrives in Iraq on first official visit: state TVHis visit to Iraq is the first since he became president in 2013.

المكتب الاعلامي لرئاسة الجمهورية‏Verified account @IraqiPresidency 23m23 minutes ago
The President @BarhamSalih asserted that establishing strong ties with Iran and developing them will be for the benefit of Iraq and the region. 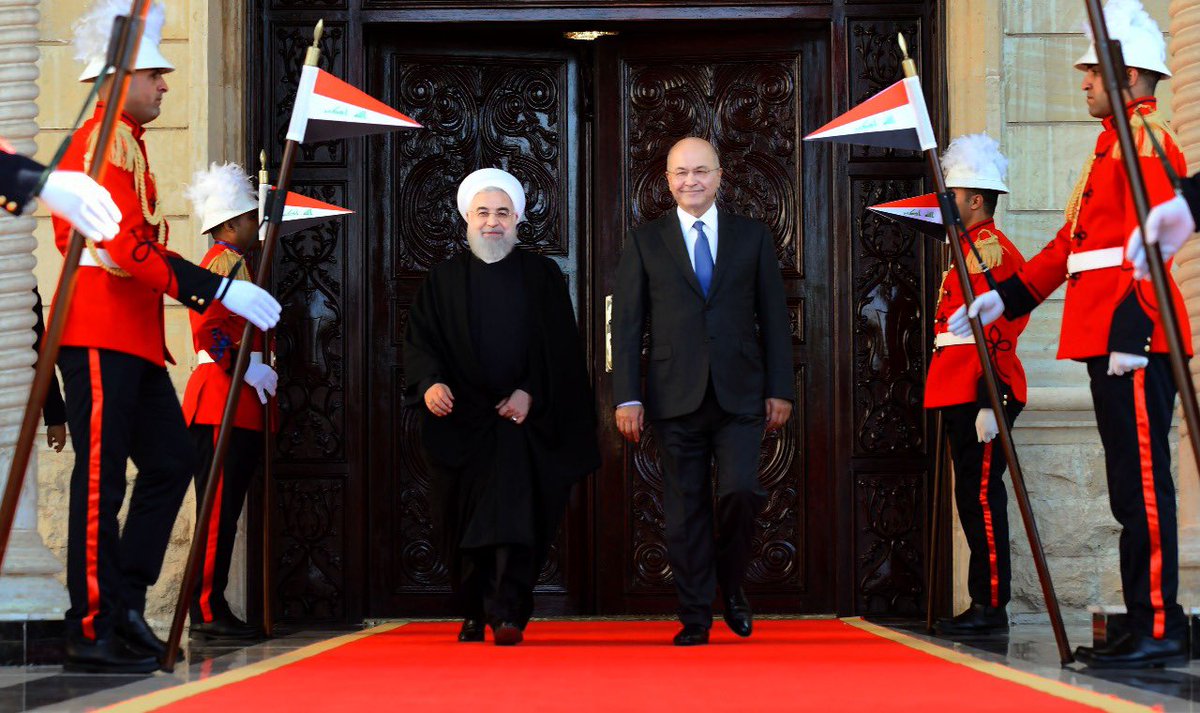 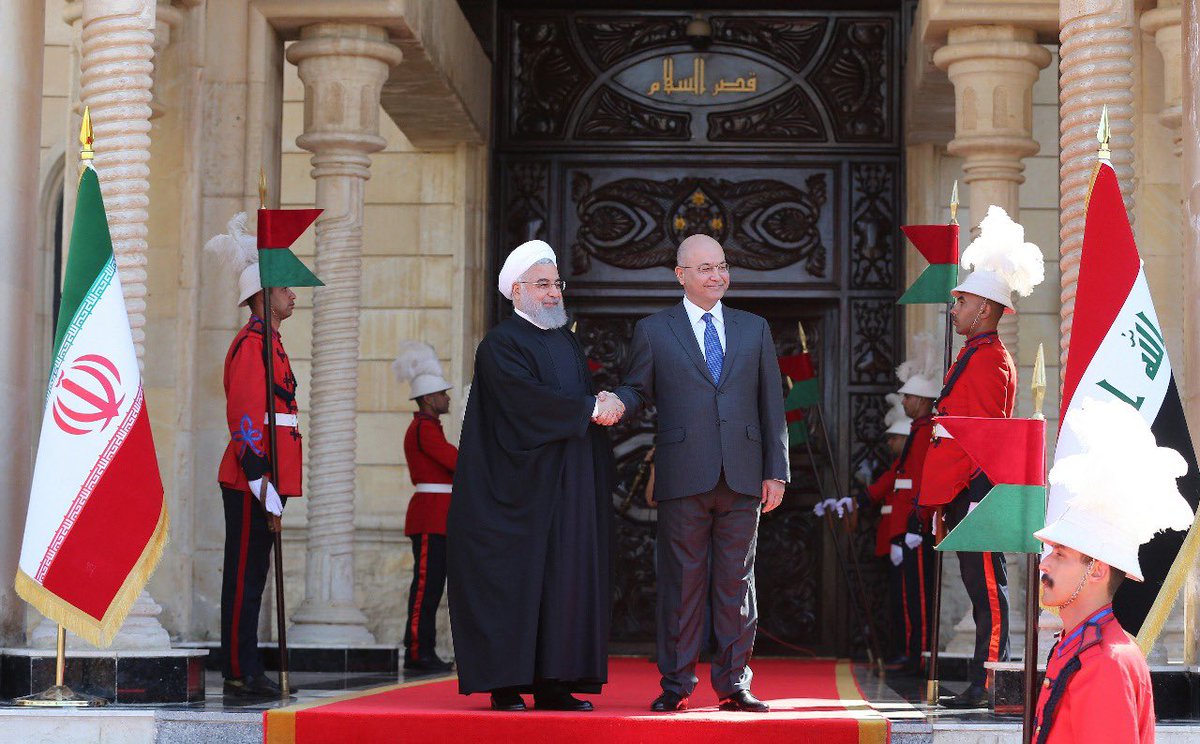 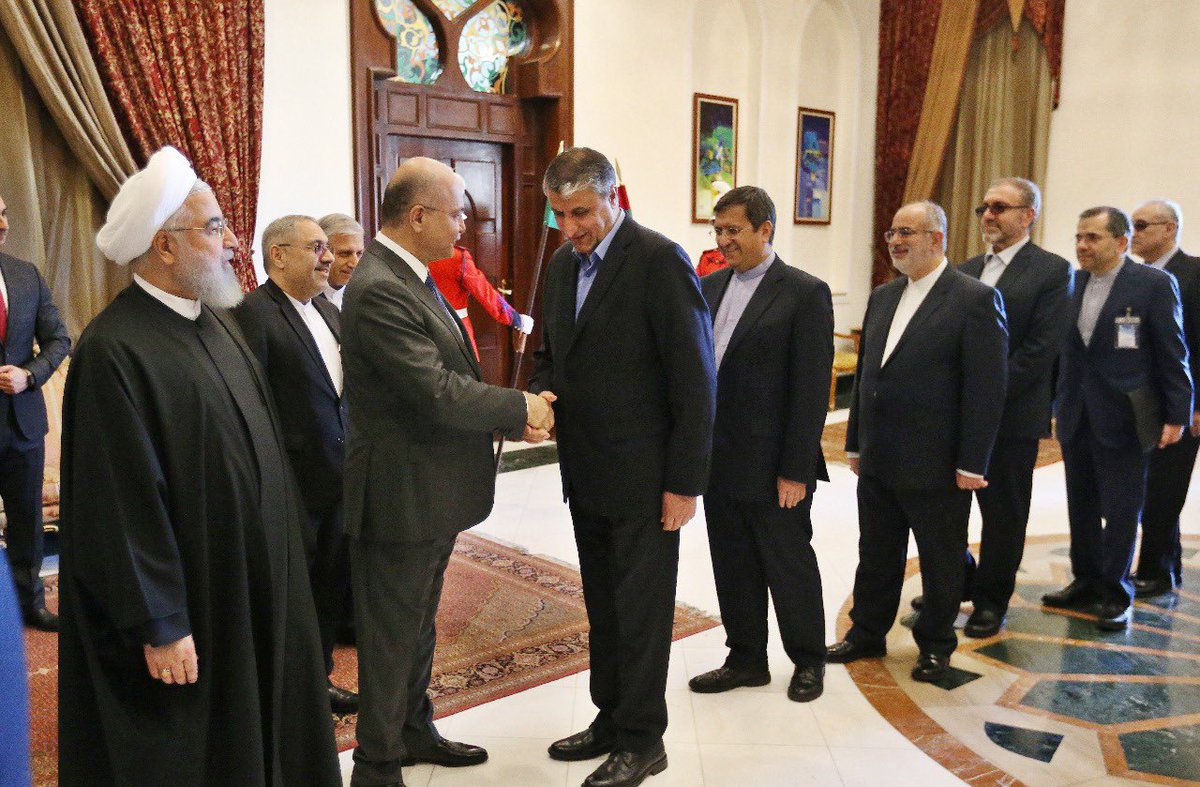 Turning to the topic of corruption . . .

14 hrs ·
The director of Babel Health department ,Nawras al-Kasbi, is accused of corruption and dealing with fictitious companies and the deliberate neglect of health institutions in the province.

14 hrs ·
The militias belonging to the politicians in # Baghdad government are controlling the fields of "Ajil and Alaj" in # Kirkuk; and carrying out the smuggling of oil abroad, while all are concealing these operations.
According to the MP Mansour Meraid.

In other news, William Arkin explores the issues regarding North Korea (at THE GUARDIAN) and concludes:

The experts insist that despite two summits, Trump has gotten nothing from Kim Jong-un. After Hanoi, everyone seems to want to give the president a history lesson on nuclear weapons, war, military realities and alliances. The experts cite many reasons for the sudden collapse in Hanoi: Trump’s arrogance and lack of preparation, the president going for too much, the mercurial mix of leaders and finally, the “fact” – a fact at least to the establishment – that North Korea will never give up its nukes. It’s all to push the amateur president and his cockeyed fantasy to denuclearize to just get out of the way.
Reversing the progress that has been made, and returning to brinksmanship would be exactly the wrong course to follow. Yes, the North has reneged on agreements in the past. Yes, Kim is unlikely to embrace the Trump-Pompeo bargain: give up nukes, get sanctions relief, and prosper like your communist brethren in Vietnam. It is tantamount to Kim negotiating his own demise.

The North say they want sanctions relief and an elimination of “the nuclear threat” against them. It isn’t so ridiculous to provide that if one has an eye on a bigger prize: the opening up of the country to commerce and the internet. One can scream loudly about how horrible a regime is (Saddam), about human rights (remember the Marsh Arabs, the Kurds, the Shi’a majority?), and about the horrific consequences left and right. But is it possible that the Pentagon and the national security establishment is just stuck on its blinkered WMD playbook, even more so than it is on actually making progress towards a long and backdoor path to disarmament and ultimate reunification?