If so, grasp that this is because there's nothing else to even remotely praise.

The United Nations Children’s Fund (UNICEF) has ramped up efforts to provide warm clothes and life-saving supplies to more than 150,000 displaced children across northern Iraq whose lives are threatened by freezing temperatures.
Many families in the region have been left with next to nothing after being on the move for years due to conflict and resulting economic hardship. It is “impossible” for them afford fuel for heating and winter clothes to keep their children warm, the UN agency warned.
Flash floods last month worsened the situation, said Peter Hawkins, the head of UNICEF operations in Iraq.
“The devastating floods have made this winter even more difficult for displaced children who are extremely vulnerable to hypothermia and respiratory diseases,” he said, underscoring that every child “deserves to be warm and healthy.”
Upping its response, UNICEF is providing winter clothes, including boots, scarves, and hats to approximately 161,000 children in Sinjar, Erbil, Dohuk, Ninawa, Anbar, Diwaniya, Basra, Salaheddin, Baghdad and Suleimaniah, including through cash support.
According to the UN agency, those receiving assistance age between 3-months and 14-years, in hard-to-reach areas, having been through years of violence, including gender-based violence, and trauma of war.

UNICEF, the Red Crescent, etc.  All in Iraq, all giving.  There are a lot of poor nations in need -- in dire need.  They don't sit on oil reserves.  From Iraq Oil Wealth:


If oil in the ground is money in the bank, Iraq is wealthy. Iraq can produce 2 billion barrels per year. At $100 per barrel, that oil would sell for $200 billion. The population of Iraq is 24 million and that oil income translates to $8000 per person. If Iraq sells a quarter of its potential reserves at an average price of $100 for the next 20 years, that would generate 90 billion x $100 = $9 trillion. If the population of Iraq grows to 30 million that would be $300,000 per capita for 20 years, or $15,000 annual income per capita. Productive capital assets are $60,000 per capita in the US, and $5,000 in the entire world. If Iraq invests only a quarter of its oil revenue for the next 20 years, it will match current US productive assets per capita.
The total value of Iraq potential oil reserves at an average profit of $75 per barrel over next 100 years is 360 billion x $75 = $27 trillion or $900,000 per capita, making every Iraqi a millionaire. These calculations do not include natural gas revenue, lately about equal to oil revenue. Also, most of Iraq has not been explored for gas or oil. In the Arab Gulf region, proven oil reserves are 195 trillion barrels. Selling this at an average profit of $75 per barrel for the next 100 years will generate $15,000 trillion income. If half of that is invested, it would amount to $7,500 trillion or a quarter of the present total capital assets in world.

Iraq has more than enough money to take care of its people . . . if the officials would stop stealing.  But they don't and Iraq remains one of the most corrupt nation-states in the world.

By refusing to care for their own people, the Iraqi government not only harms the Iraqi people, they also prevent assistance from going to non-oil rich nation-states.

The corruption should be stamped out in Iraq because it seriously hurts the Iraqi people; however, it also hurts non-Iraqis in need as well.

Back in July, residents of Basra took to the streets to protest.  With a break for a religious holy day, they've more or less been protesting non-stop.

They haven't addressed the demands of the protesters: jobs, security, water that you can drink (over 100,000 residents have ended up in the hospital from drinking Basra's water) an end to corruption, etc.

Can't praise the government of Iraq for addressing the needs of the people, so praise them for a meaningless one year anniversary.


They can't praise the human rights situation in Iraq.

Human rights sources: In just two years, more than 1,200 human rights activists have been killed in the world, and a large number of human rights defenders in Iraq have been subjected to harassment and multiple crimes, including arrest, torture and assassination. 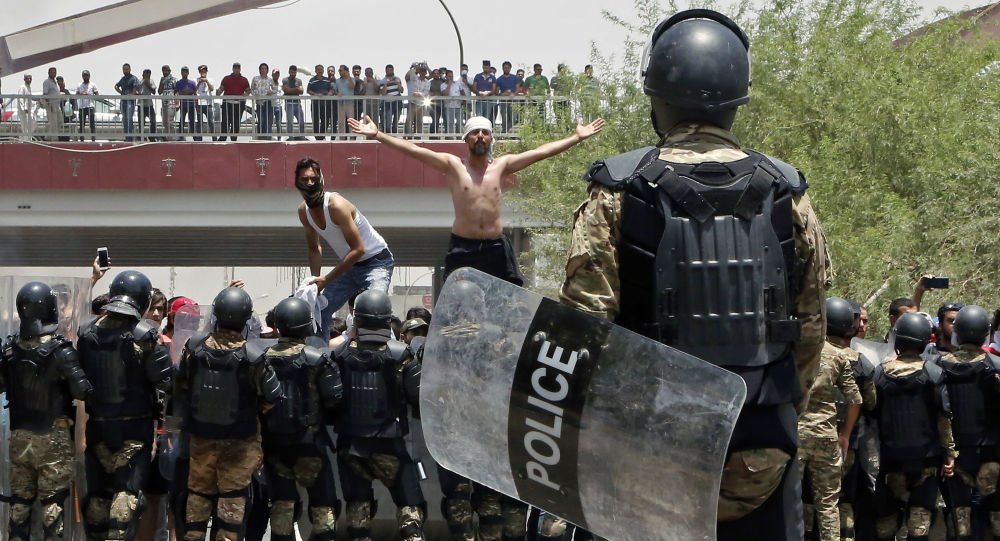 amsiiraq‏ @amsiiraqEn 49m49 minutes ago
Human rights sources: The humanitarian situation in Iraq is not good; it has been going on for years because of the serious events that have taken place in the country, which have contributed to the violation of the economic, social, cultural,political and civil rights of Iraqis. 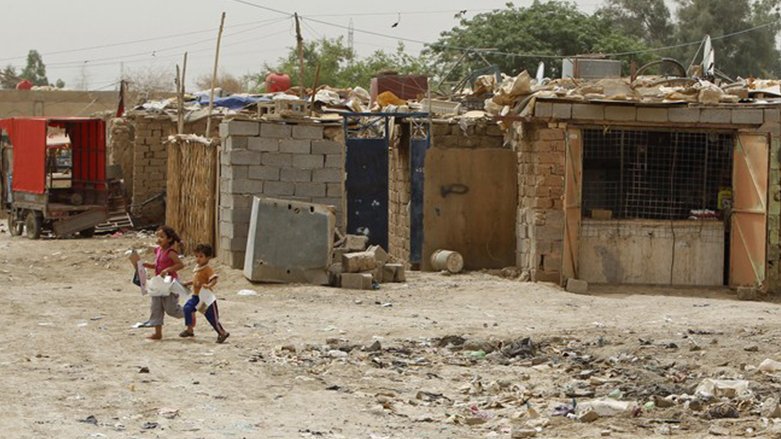 What about the press?  The US government spent years and years on the media in Iraq.  They failed to defend the media from Nouri al-Maliki who began attacking it in the spring of 2006.  But surely, life is better for journalists in Iraq now then at the start of the war, right?  Wrong.   MIDDLE EAST MONITOR notes,  "Some 40 journalists were killed and 76 others were wounded in Iraq between 2015 and 2017, the Association for the Defence of Press Freedom in Iraq said on Sunday."

Meanwhile, ISIS sleeper cells have maintained a low-level insurgency, carrying out bombings and assassinations. In May, the coalition and Iraqi forces launched Operation Roundup to track down remnants of the group, which have reportedly taken refuge in underground tunnels in remote and mountainous regions. Recent coalition airstrikes have struck targets outside of Mosul, in the Hamrin mountains, near Hawija, and around Kirkuk.


Well at least the Iraqis have freedom, right?  Bully Boy Bush said this was about freedom -- back at the start of the war, so long ago few remember.

Reality: Women have less freedoms post-2003 invasion and anyone suspected of being gay in Iraq knows how hollow "freedom" rings in Iraq.  In addition, Saad Salloum (AL-MONITOR) reports:


Deputy Justice Minister Hussein al-Zuhairi recently said Bahaism is not a religion or faith during a dialogue with the Committee on the Elimination of Racial Discrimination as it considered a report on measures taken to implement the provisions of the International Convention on the Elimination of All Forms of Racial Discrimination.
Zuhairi expressed the Iraqi government’s commitment to legislation prohibiting the Baha’i religion in 1970 and added that there is no religion above Islam since the Iraqi Constitution set the tenets of Islam as a source of law. He said that as Iraqi society is Muslim, it is not possible to ignore the tenets of Islam in legislation.
Zuhairi’s statement angered representatives of civil society and the delegations of organizations that presented parallel reports to the government’s report in which they outlined the Iraqi government’s and the Kurdistan Regional Government’s violations of the rights of minorities.
Al-Namaa Center for Human Rights director Hassan Wahab said, “The parallel reports put forward by civil society organizations confirmed that minorities face discrimination. The religious discrimination against Baha’is has created controversy given the statements of the head of the Iraqi government’s delegation.”

And there's still no full Cabinet.  14 ministers were confirmed October 24th and none since.  It's eight ministers short -- including the security posts of Minister of Defense and Minister of Interior.


Stalled government formation in #Iraq shows that parties still outweigh a weak PM. A year after militarily defeating #ISIS, the necessary political solution to tackle the roots of conflict is still a distant prospect. My latest for @WPReview
2 replies30 retweets49 likes

majeed jadwe‏ @MJadwe
Replying to @renadmansour @WPReview
But Al Maliki was a powerful prime minister and he was not able to form a complete cabinet in his second term. Like all Iraqis I believe that the real root of this problem lies outside Iraq, specifically in the regional conflict, notably US & Iraq.
2:17 AM - 10 Dec 2018
1 reply0 retweets1 like

Nouri didn't have a full Cabinet when he became prime minister the first time.  No one has ever followed the Constitution.  That is appalling and Majeed can dry hump Nouri's leg all he wants, Nouri is, was and will always be a thug.  Majeed goes on to Tweet that Nouri "was not a dictator but he was forced to be" -- save it for your bodice ripper, Majeed, save it for your bodice ripper.


Thug Nouri needs to be behind bars.  Instead, he seeks to remain one of Iraq's three vice presidents. 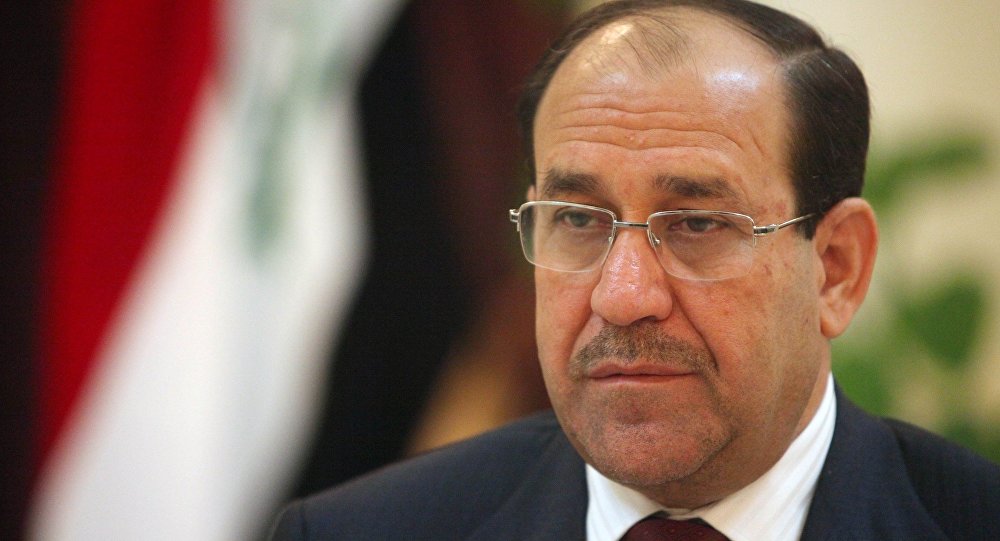 
There is no accountability in Iraq and there is no progress.  The proof is that Nouri is not behind bars.  All this time later, despite all the deaths, all teh corruption.