Zuckerberg is every woman's nightmare.  An unnattractive smug piece of trash.  You encountered him in classes, in the park, wherever.  He was smug and condescending while also wanting to make it with you.

With a little CIA seed money, he started one of the worst online sites.  It harvested your information while pretending to guarantee your privacy.  It used you.  It played you.

Let's start with another whore in David Brock's bordello.

Just so we're all clear: Trump's new national security adviser John Bolton didn't just lie about WMD's to promote the Iraq war. He stated, in 2015, that the Iraq war — which cost thousands of lives, wasted trillions of dollars, and ultimately spawned ISIS — was "worth it."
141 replies2,709 retweets4,549 likes

Sit your tired ass down.  Just stop.  The anniversary of the Iraq War was this week and you didn't Tweet about that, did you, whore?  No, you are one of those wack jobs with conspiracy theories about Russia.  You are so embarrassing.  You're worse than the flat earthers.  But that's fine, crazy, just don't try to grand stand on Iraq.

David Brock's whores always think they can pretend to care about Iraq and that the world won't notice they only mention Iraq when they can trash Republicans -- and only Republicans, they never use it to trust Democrats but, hey, what cunning whore goes out of their way to trash one of the johns?

Bolton thinks it's "worth it."  Like Mad Maddie Albright thought killing half a million Iraqi kids was "worth it"?

Clearly, Caroline O, you think it was "worth it" too because you've can't say a damn word about an ongoing war that's still resulting in the deaths of Iraqis and the deaths of US service members (7 last week alone -- 59 since August of 2014).  How are you any different from John Bolton?  Because I'm not seeing a bit of difference between you and Bolton.  Both of you, through your actions and deeds, normalize and condone an illegal war.  Why don't you go to David and say, "Hey, be a good pimp and don't send me out in the rain tonight?"  Then you can use that time to contemplate how whorish someone has to be to only bring up an ongoing war when it's too her political advantage?

Scurry off now, no one wants to contract a social disease from you. No one needs to hear from you.  As Jhene Aiko sings, "Yes, your mama did, she raised a fool wow" ("Never Call Me," from her album TRIP).


Or maybe Caroline O can scurry off to John Bolton? 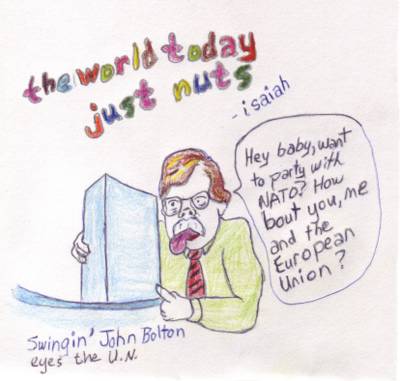 Yes, Bolton was a menace and remains one.  But we'll cite those who speak out against war, war, war and not silly tricks like Caroline O.

I can’t think of anyone more dangerous than John Bolton to be the National Security Adviser. Pompeo and Bolton are standard bearers for the interventionist neocon foreign policy establishment, addicted to regime change wars, without any thought of the deathly cost or consequence
116 replies799 retweets1,551 likes

McMaster is out. Trump’s choice of John Bolton to replace him, following his pick of Pompeo, continues the extreme warhawk neocon takeover of the White House. Bolton helped build the case of WMD lies that was used to invade Iraq. Bolton still champions that war today.
51 replies613 retweets1,135 likes


Bolton’s reemergence within the inner circle of American imperialist decision-making exposes the role played by the Democratic Party since the run-up to the Iraq War, launched 15 years ago this week. At each stage in the preparation, launching, and expansion of the war, the Democratic Party sought to divert mass opposition to war behind its own electoral campaigns, including that of John Kerry in 2004, the 2006 midterm elections, the Barack Obama campaign in 2008, and those of Bernie Sanders and Hillary Clinton during the Democratic primaries and general election of 2016.
Despite the fact that the Democratic Party controlled the presidency from 2009 to 2017, not a single leading figure responsible for war crimes, including the CIA officials responsible for torture, have been punished or even fired.
Instead, Obama escalated imperialist war around the world. Just this week, the Democratic Party voted for a $1.3 trillion federal budget which includes massive increases in military spending. As a result of the imperialist character of both parties, a detestable figure like John Bolton is able to return to the Oval Office.

Early this morning, the US Senate followed the House's lead and passed the $1.3 trillion spending bill that now awaits the signature of the President.  Senator Rand Paul's raised some serious questions about the bill (we posted those here) but for the snapshot we'll note this one.

Page 357. Sec. 8116 no funds can be used in Iraq in contravention of the War Powers Act sounds good but . . . haven’t we been back in Iraq at war against new foes without any new congressional authorization?
28 replies1,007 retweets2,222 likes

There hasn't been a congressional authorization.  Yet the war continues, day after day, and apparently just so it can be a political prop for posers like Caroline O.

Hayder al-Abadi staked his future on the premature claim that he vanquished ISIS in Iraq.  That, of course, hasn't proven to be the case.   He hasn't been very effective eliminating corruption either. MEM reports, "Iraqi Prime Minister Haidar Al-Abadi yesterday ordered an immediate investigation into allegations that fake jobs in the public sector were being offered to citizens by political parties in order to win votes in the country’s upcoming general elections."

Prime Minister Abadi has announced his plan to lead a coalition of mostly Shia parties and independent Sunni figures under the framework of his Victory (Nasr) Alliance. In launching his own coalition, Abadi is competing with Vice President and former prime minister Nouri al Maliki, who, like Abadi, is a leading member of the Dawa Party. Maliki’s State of Law alliance has been critical of Abadi’s leadership, and some State of Law members are vocal opponents of Iraq’s security partnership with the United States. Several former leaders of the Popular Mobilization Force (PMF) militias organized to help fight the Islamic State are participating in the elections as candidates under the rubric of the Fatah Alliance (see textbox below).
Other prominent Iraqi figures have organized coalitions and lists to contest the election, including a largely Sunni list led by Vice President Osama al Nujayfi and the National Alliance jointly led by Vice President Iyad Allawi, COR Speaker Salim al Juburi, and former deputy Prime Minister Salih al Mutlaq. Among Shia leaders, Ammar al Hakim’s Wisdom (Hikma) movement has formally withdrawn from the Prime Minister’s coalition, but Hakim reportedly intends to coordinate with Abadi during government formation negotiations after the election. Shia cleric Muqtada al Sadr is directing his followers to support the multiparty, anti-corruption oriented Sa’irun coalition. Sadr has criticized the participation of PMF leaders in the election and is campaigning on a populist reform and anti-corruption platform.


Barack Obama ousted Nouri al-Maliki in the fall of 2014 to make Hayder prime minister.  Former prime minister and forever thug Nouri wants to be prime minister again despite his flunkies repeatedly insisting that is not the case.  ALSUMARIA reported yesterday that Nouri has insisted Iraq is passing through a serious, make-it-or-break-it period.  Naturally, Nouri believes he's the one who can save the country -- despite nearly destroying it in 2014..  Today, ALSUMARIA notes that he's saying Iraq needs someone who can lead the country in construction and progress.  Others who would like to become prime minister include Shi'ite cleric and movement leader Moqtada al-Sadr who has teamed up with five other groups -- including the Iraqi Communist Party -- for this election cycle.  Two others who'd like to become prime minister, Ammar al-Hakim and Ayad Allawi, have done joint photo-ops.  Ayad Allawi should have been prime minister per the 2010 elections.  But Nouri refused to step down for eight months and brought the country to a stalemate.  Barack Obama, then president, refused to back the winner of the election and instead brokered The Erbil Agreement which, in November of 2010, gave Nouri a second term as prime minister -- in effect, nullifying the election results and overturning the will of the Iraqi people.


March 7, 2010, Iraq concluded Parliamentary elections. The Guardian's editorial board noted in August 2010, "These elections were hailed prematurely by Mr Obama as a success, but everything that has happened since has surely doused that optimism in a cold shower of reality."

November 10, 2010, The Erbil Agreement is signed.  November 11, 2010, the Iraqi Parliament has their first real session in over eight months and finally declares a president, a Speaker of Parliament and Nouri as prime minister-designate -- all the things that were supposed to happen in April of 2010 but didn't.


If the post-election process goes even 1/4 as poorly as it did in 2010, Ramadan will only compound that.  Holding the election three days before Ramadan was very poor planning.

#Iraqi_Elections All want to reform, but few are sinceres. The reformation in Iraq must be started right now via a set of Procedures are: Cancel privileges and pensions retailed; work on rehabilitating infrastructure and balanced external relations;
0 replies0 retweets0 likes