No matter how much we wish she would.

Gloria Steinem ‏@GloriaSteinem  Jan 20
Democracy is bigger than any one person. Follow @obamafoundation and let’s get to work.

Gloria Steinem's is full of it.

She lied and she doesn't get that it doesn't vanish.

She lied about the CIA and she had so many of us fooled.


She can't escape it now.

She whines when THE NEW YORK TIMES notes her work for the CIA but she can't silence the media any longer.

It's not going to vanish.

So should people who stick to her at this late date.

When Gloria passes away, all the doors open.

She lied and lied and she tamped down on a movement -- the feminist movement.

She went generic when the movement was radical.

Maybe she was working for the CIA then too?

But she's lied and she's harmed the movement.

Wednesday, January 25, 2017.  Chaos and violence continue, day 100 as The Mosul Slog continues, the War Crimes continue, President Donald Trump may announce a ban on refugees while new vetting policies are devised, and much more.

U.S. President Donald Trump is expected to sign executive orders starting on Wednesday that include a temporary ban on most refugees and a suspension of visas for citizens of Syria and six other Middle Eastern and African countries, say congressional aides and immigration experts briefed on the matter. Trump, who tweeted that a "big day" was planned on national security on Wednesday, is expected to ban for several months the entry of refugees into the United States, except for religious minorities escaping persecution, until more aggressive vetting is in place.
Another order will block visas being issued to anyone from Syria, Iraq, Iran, Libya, Somalia, Sudan and Yemen, said the aides and experts, who asked not to be identified.


I have no respect for 'reporters' who pretend to be objective but aren't.  Julia goes running to a former Obama officials who says what Trump is doing is legal but . . . wah wah wah.

I'm sorry, it's not her place to print lies.

As someone who cares about the refugee issue, I know she printed a damn lie.

So do a lot of other people who worked on the Iraqi refugee issue.

Differences is, I wasn't afraid to call out Barack.

And of course CNN's embarrasing Elise Labott stopped asking the State Dept about the issue when it was clear that they were not going to meet their states goals.


When Senator Ted Kennedy died, Barack walked back on his promises regarding refugees.

Couldn't do it while Ted was alive, he owed Ted way too much.

So Trump's going to make an announcement?

That's already makes him more transparent on this issue than Barack ever was.

And maybe dumb ass 'reporters' could try offering the correct context there?

We called Barack out here.  We called it out offline.

Crimes will happen in a refugee population.

You're dealing with people new to a country, struggling economically.

The debate/discussion I had with State Dept friends on this had us both acknowledging that.

But stealing isn't murder, it was stressed to me.

Okay, that's fine, I allowed.  But what about the program that was supposed to be bringing refugees in from Iraq -- people who'd worked with the press or with the military.

That got put on hold too.

I agree with Barack Obama about the Islamic State being j.v.

But there's been a full hysteria whipped up about it.

As a result, it's not shocking that there are calls for stricter vetting.

Political reality is also that Congress will go along.

Democrat or Republican, you'll find few who will come out today or tomorrow arguing, "We need less vetting before we allow people to come to the United States."

There will be a handful but only a handful.

Yes, 9-11 impacts things but I'm not even going there.

If you're old enough to remember the boat people -- Vietnamese who began fleeing after 1975 -- the ones who spoke of horrors -- the ones Joan Baez defended and the ones that caused Jane Fonda to declare publicly that she was not going to be an apologist for the Vietnamese -- in other words, don't ask her about the boat people.

Remember what was done to them after the UN 'helped' with then-US Vice President Walter Mondale's assistance?

The process was not speeded up.  Instead, the boat people would eventually be asked to return to Vietnam and to go through a process by which the US would determine whether they would accept them or not.

That was the condition.

You had to return to the country you'd fled.

I'm not thrilled with it but it is what it is and he's being more open and upfront about it than was Barack.

Where, historically, We The People could have impact is what type of restraints/guidelines are put on.

If he indeed announces it, that's where the focus should be.

There have always been laws, guidelines and rules governing who could immigrate to the US.  That someone wants to change those is not surprising.


What they will be changed to is something we should all watch -- regardless of where you stand on the issue.  It's a decision for the nation what the rules should be and everyone should weigh in.


Well, maybe not everyone.


Good for you, Moustafa Bayoumi, glad you know so many people.

And if you're going to confuse the issue then maybe you shouldn't weigh in.

There will be enough hysteria from all sides, we need a rational conversation.

But, Chris, did you cover what Barack did?

Your wife had a good job for the administration, didn't she?

For the record, Chris Hayes stood by his word and covered the Iraq Veterans Against the War's hearings in 2008.

As a result, I've given him a pass for eight years.  The pass has termed.

(Chris was the only one who kept his word.  Various 'lefties' promised to cover it and didn't.  Among them?  Matthew Rothschild.)


I don't dislike Chris but it's been eight years, his pass is revoked.

Samuel Oakford Retweeted Douglas Silliman
10 hours ago the US ambassador to Iraq congratulated Iraqi forces for capturing eastern Mosul. Tomorrow Iraqis are banned from the US.
Samuel Oakford added,

Douglas Silliman @AmbSilliman
I add my congratulations on the Iraqi Security Forces' victory in eastern Mosul. The #USA will continue to help #Iraq to defeat ISIL twitter.com/haideralabadi/…
16 replies386 retweets249 likes

Sam works for AIRWARS which does good work.

Iraqis are not banned.

More to the point, did he think the Iraqi forces were wanting to immigrate?

Was it a poor attempt at humor?


And while some are blindly cheering the Iraqi forces -- as authoritarian types always do -- others aren't so keen on them.

This screaming child must pay the world price #Iraqi_army_crimes 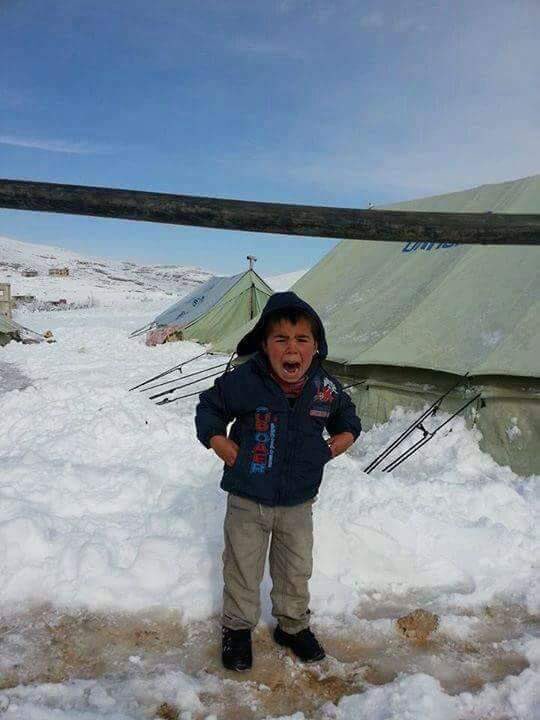 Vivian Salma (AP) reports on Donald Trump's aside in a speech to the CIA about Iraq's oil ("Maybe you'll have another chance" to seize it) and at least notes no one knows whether to take it seriously.  Good for her there, bad for her here:

The statement ignores the precedent of hundreds of years of American history and presidents who have tended to pour money and aid back into countries the United States has fought in major wars. The U.S. still has troops in Germany and Japan, with the permission of those nations, but did not take possession of their natural resources. And taking Iraq's reserves, the world's fifth largest, would require an immense investment of resources and manpower in a country that the United States couldn't quell after spending more than $2 trillion and deploying at one point more than 170,000 troops.

Salma ignores that the US government did not go to war with Iraq officially.

The US government went to liberate the Iraqi people.

Salma also ignores exactly what the US government has done repeatedly with natural resources.

And let's quote Zinn regarding WWII:


It was a war waged by a government whose chief beneficiary- despite volumes of reforms-was a wealthy elite. The alliance between big business and the government went back to the very first proposals of Alexander Hamilton to Congress after the Revolutionary War. By World War II that partnership had developed and intensified. During the Depression, Roosevelt had once denounced the "economic royalists," but he always had the support of certain important business leaders. During the war, as Bruce Catton saw it from his post in the War Production Board: "The economic royalists, denounced and derided . . . had a part to play now. ..."
Catton (The War Lords of Washington) described the process of industrial mobilization to carry on the war, and how in this process wealth became more and more concentrated in fewer and fewer large corporations. In 1940 the United States had begun sending large amounts of war supplies to England and France. By 1941 three-fourths of the value of military contracts were handled by fifty- six large corporations. A Senate report, "Economic Concentration and World War II," noted that the government contracted for scientific research in industry during the war, and although two thousand corporations were involved, of $1 billion spent, $400 million went to ten large corporations.
Management remained firmly in charge of decision making during the war, and although 12 million workers were organized in the CIO and AFL, labor was in a subordinate position. Labor- management committees were set up in five thousand factories, as a gesture toward industrial democracy, but they acted mostly as disciplinary groups for absentee workers, and devices for increasing production. Catton writes: "The big operators who made the working decisions had decided that nothing very substantial was going to be changed."
Despite the overwhelming atmosphere of patriotism and total dedication to winning the war, despite the no-strike pledges of the AFL and CIO, many of the nation's workers, frustrated by the freezing of wages while business profits rocketed skyward, went on strike. During the war, there were fourteen thousand strikes, involving 6,770,000 workers, more than in any comparable period in American history. In 1944 alone, a million workers were on strike, in the mines, in the steel mills, in the auto and transportation equipment industries.

Last Wednesday when they announced eastern Mosul had finally been 'liberated.'

Well it's Wednesday again so time for another announcement.


Okay, okay, but this time eastern Mosul is like really liberated.

100 days and still the operation goes on.

It was supposed to take a few weeks. 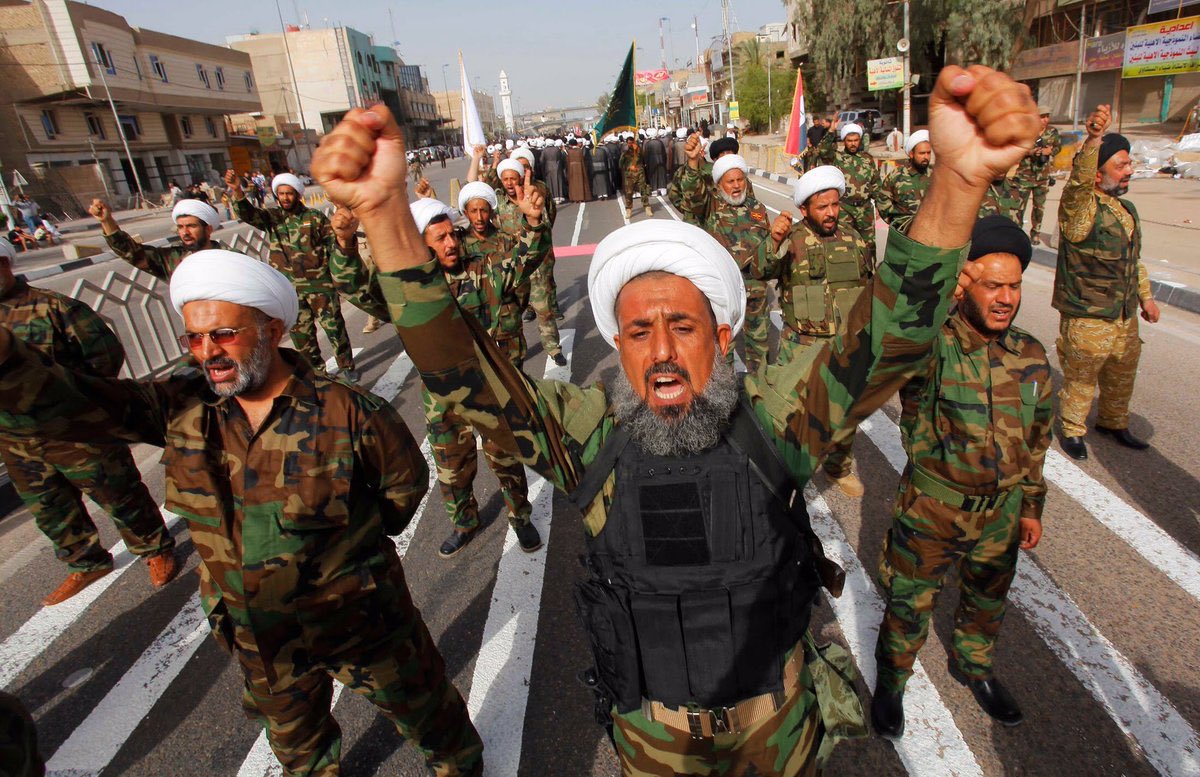 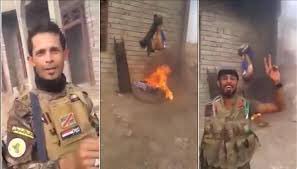