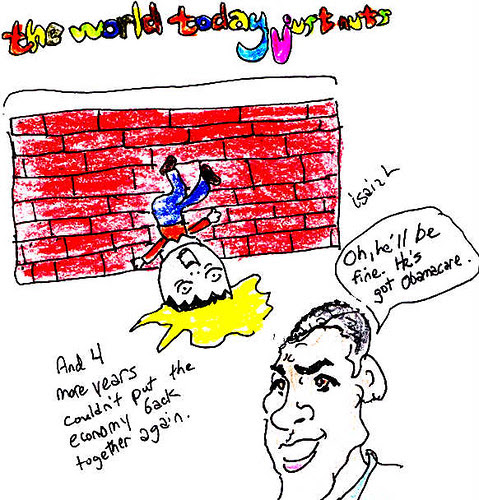 Isaiah has another comic but we decided we'd highlight that one tonight.  Also,   Kat's worked her ass off coming up with three -- THREE -- reviews over the holidays: "Kat's Korner: Susanna Hoffs and Joss Stone, who can figure it out?," "Kat's Korner: Animal Collective goes instinctual"  and "Kat's Korner: All Hail The Queen of F**ked Up"


So NPR has a story entitled "Are You Better Off? Democrats In Charlotte Say It's Complicated" -- please.

That's a yes or it's a no.  Don't try to legal-eeze every answer.  You're better off or you're not.  That's how most Americans are going to look at it.  There's probably 80% of Democrats that will say yes and 80% of Republicans that will say no just based on party i.d.  But the middle, the ones who don't have strong party i.d. are not going to play that game.

They're going to ask the question and give it a yes or no answer.

They are not going to sit there and play, on the one hand, on the other.  They are going to make a decision and it's going to be yes or no.

"Media: Anger wasted, anger utilized" (Ava and C.I., The Third Estate Sunday Review):
Robin Morgan was an actress, many years ago when she was a child.

She's now the host of the latest offering from the Women's Media Center, the Sunday afternoon talk show WMC Live with Robin Morgan.   The show debuted last Sunday and it revolves around current events, interviews with guests and Robin's rant.

Robin's rant isn't lovely and sweet.  No one will mistake it for that.

But it's also not offensive.

How is she able to cover the same topics that an Ellen Barken Tweets about and Robin pulls it off?

Equally true, she's speaking as a woman.  Women are oppressed.  As a woman, she can sound off for women and it's perfectly acceptable.

But Ellen and a large number of journalists last week though they could sound off on behalf of the President of the United States of America.  That's not truth to power, that's teacher's little suck up.  Equally true, when you are shut out of power, as the left was under Bully Boy Bush, you can get away with a great deal.  But when your supposed great leader is swept into the White House and all you're doing is bitching and moaning and whining and attacking?  You look like the most miserable person in the world.

Robin's taken an outsider position for her radio show and we hope she keeps it.  It would be so great to have a woman on the radio who is there for women.  It would be so wonderful to have a woman who calls out all the people and all the systems that oppress women and all the ways in which women are oppressed.  To have someone show that kind of strength is true liberation because it provides behavior which can be modeled.

Robin's show last week was the best thing in radio of the year.  We have high hopes for it and hope she continues to be the outsider who will defend women and fight for them.  That's not anger wasted, that's anger channeled and that would do more for the state of women, for the state of humanity, than a million and one Twitter feeds.


I think Ava and C.I. had a really important article this week.  If you read it in full, you'll find many other topics but that was my favorite part.

In March 2010, Iraq held parliamentary elections.  Nouri's State of Law came in second to Iraqiya which meant no second term for Nouri unless Iraaqiya imploded in the 30 day process of naming a Cabinet.  (When named prime minister-designate, you have 30 days to name a Cabinet.  If you don't succeed within 30 days, another prime minister-designate is supposed to be named.)  Nouri threw his fit and had the White House backing him.  This brought the government to a standstill for over 8 months (Political Stalemate I).  During this time, Nouri made spectacular promises in an attempt to sway people to his side.  He even (finally) scheduled a census for Kirkuk.

The US brokered a contract with the various political blocs.  It gave Nouri a second term in exchange for various concessions.  Among those was implementing Article 140.  This contract is called the Erbil Agreement.   The day after it was signed, Parliament held their first real session in over 8 months and Nouri was named prime minister-designate.  Nouri then trashed the Erbil Agreement and called off the the Kirkuk census that had been scheduled for the beginning of December.

So now the National Alliance -- of which Ammar al-Hakim is a part -- wants to act as if Article 140 of the Constitution is optional?  And al-Hakim wants to pretend that things are better in Iraq?

This as Nawzad Mahmoud (Rudaw) reports, "Several Kurdish lawmakers in Baghdad believe that the situation is not yet ripe for negotiations between the Kurdistan Region and central government."  Speaking to various Kurdish MPs a portrait of a distracted Nouri quickly emerges:

Last week, the Non-Aligned Summit was held in Tehran where leaders discussed solutions to the current situation in Syria. During the summit, Iraqi Prime Minister Nuri al-Maliki proposed an initiative to end Syria's violence.
"Maliki should have proposed an initiative to end Iraq's political turmoil instead," Abdullah said.
He added, "It's surprising that Maliki is busy finding a solution for Syria while his own country is in crisis."


In more political turmoil, All Iraq News reports that Ismail al-Jubouri has been arrested.  He is a member of the Diayala Provincial Council and is also a member of Iraqiya.  He's been arrested on charges of terrorism.  It would appear to be political especially when an uproar over the arrest forced the security forces to release al-Jubouri shortly after he was arrested.  He has stated he was arrested for political reasons including that he has announced he is running for governor of the province.  (August 18th, Governor Hashim Hayali died.)  Along with needing a new governor, Diyala's also facing another problem.
All Iraq News reports people are setting fires to the many orchards in the province and farmers are demading the authorities do something.
iraq
cindy sheehan
pri
the takeaway
john hockenberry
afp
antiwar.com
margaret griffis
rudaw
al mada
alsumaria
cnn
mohammed tawfeeq
dar addustour
ak news
the guardian
george monbiot
Posted by Elaine at 11:57 PM