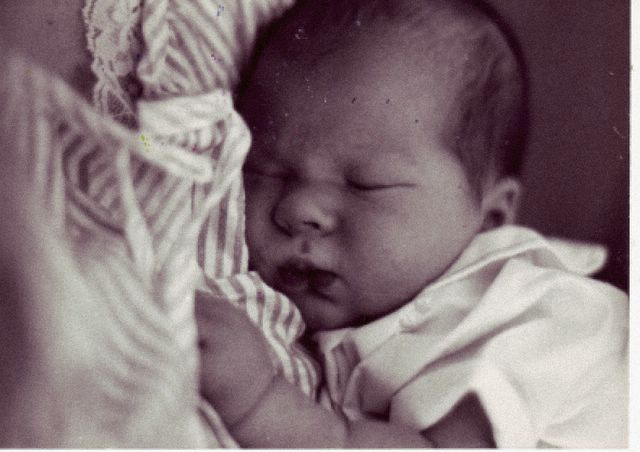 I interviewed Kayla for the gina & krista round-robin that went out last Friday because she was thinking about peace and the future. We'd exchanged e-mails since March and Gina and Krista wanted to do something to note the birth of Brian.

Then on Saturday morning, I participated with C.I., Jim, Rebecca, Ava and Ty on a thing that we were all going to do for The Common Ills. At the end of that, C.I. asked if it was okay if it ran at The Third Estate Sunday Review if they needed something else? Kayla was fine with that.

Brian's a very cute baby and I love babies so I wanted to share the photo here. Look at that sweet little face.

Mike and I are starting late. We're trying to figure out what to do re: posting this week.

C.I.'s asking so it can be posted and known.

I'll be on a plane tomorrow but, barring jet lag, will be able to post later than usual.

Other than that, my intent is to have something up every day through Friday.

There won't be a set time each day so I can't offer that. But I will post something everything day.


I probably won't be "newsy." I'll probably post Thursday about Thanksgiving, for instance.

Typing "Thanksgiving" reminded me I hadn't eaten so this post goes up even later due to my stopping to eat dinner. Does anyone like Monday mornings? I hate them. The alarm goes off and nothing ever goes right. It's a runner in the hose or I'm pulling the plastic bag off some dry cleaning and see a stain they didn't get out (sometimes a stain that wasn't there when I brought in but they're really good about it when I take things back and they've never lost an article of clothing which is rare in my experience with dry cleaners). This morning there was that and the hot water took forever to come on in the shower. So by the time I was finally dressed and presentable, there was no time to stop for breakfast. Because of the holiday, I'm trying to knock out as much as possible so there was no time for lunch. I had a Granny Smith apple and that's it until I stopped to eat dinner just now.

CIA Leak Prosecutor to Go to New Grand Jury (Democracy Now!):
And this update on the CIA leak case... Special Prosecutor Patrick Fitzgerald said Friday that he plans to present new evidence to another federal grand jury. The announcement came three weeks after an earlier grand jury indicted Vice President Cheney's chief of staff Lewis "Scooter" Libby. Last week investigators questioned Washington Post Assistant Managing Editor Bob Woodward for two hours after learning that a senior administration official revealed Valerie Plame's identity to him in mid-June 2003. There has been great speculation over who within the Bush administration might have been Woodward's source. The Times of London claims it is Stephen Hadley who is now Bush's National Security Advisor. At the time Hadley was deputy National Security Advisor under Condoleeza Rice. Newsweek magazine has suggested it might be former deputy secretary of State Richard Armitage.

I find it poetic that one of the loudest dismissers of Plamegate, a journalistic "pro" and "institution," has no added to the fire and brought it back into the news -- but not by choice, by covering up. It's an interesting book end to his career. Thirty years ago he was one half of a team leading the way for what journalism could do and these days he's part of a team that seems more concerned with covering than informing the public.

His reputation was made as a voice for the public and he's killed it. A ritualistic slaying that he committed upon himself as a result of his desire to be "in the loop" but not to inform the public, just to be another sycophant.

19,000 Protest At School of the Americas (Democracy Now!)
In Georgia, an estimated 19,000 people demonstrated outside Fort Benning calling for the closing of the Western Hemisphere Institute for Security Cooperation, formerly known as the School of the Americas. It was the largest protest to date for the annual event. 40 arrests were made. Protest organizers said the U.S. military has used the school to train Latin American military officials to torture. The protests are timed to coincide with the anniversary of the November 1989 murders of six Jesuit priests, their housekeeper and her daughter in El Salvador. The weekend demonstration came just weeks after it was revealed that Vice President Dick Cheney was seeking Congressional approval for CIA interrogators to engage in torture.

The School of the Americas is an institution that has trained some of the worst human rights abusers in the world. Methods that we find shocking at Abu Ghraib and elsewhere were taught there. The abuses in Honduras, in Guatemala, you name it. They can traced back to what this "school" teaches. The school should be shut down.

This morning, C.I. noted a story by Ginger Thompson in the New York Times.

"Guatemala's Secret Police Files May Hold Clues to Atrocities" (Ginger Thompson, the New York Times):
The reams and reams of mildewed police documents, tied in messy bundles and stacked from floor to ceiling, look on first sight like a giant trash heap. But human rights investigators are calling it a treasure hidden in plain sight.
In Guatemala, a nation still groping for the whole truth about decades of state-sponsored kidnapping and killing, the documents promise a trove of new evidence for the victims, and perhaps the last best hope for some degree of justice.
Last summer, authorities from the Guatemalan human rights ombudsman's office, searching a munitions depot here, discovered what appear to be all the files of the National Police, an agency so inextricably linked to human rights abuses during this country's 36-year civil conflict that it was disbanded as part of the peace accords signed in 1996.
At that time, President Alvaro Arzu's government, struggling to usher this country through an uncertain transition from war to peace, denied to a truth commission that police files existed. It now seems clear, human rights investigators say, that Mr. Arzu's government, as well as those that followed, knew about the files all along.

You better believe that some elements in our government are nervous, worried about what's in those records.

I'm noting this instead of a peace quote for my closing tonight. FYI, the Eternity spot using the song "What The World Needs Now" just came on. Charlotte e-mailed to say she loved the song too and always find herself smiling when the spot airs on TV.

"Surprise Offensive for Peace" (Tom Hayden, The Huffington Post):
It is much too early to predict a flood, but the ice age has ended in Washington. It is a time reminiscent of Watergate, when the US intervention in Vietnam collapsed as the White House was weakened by scandals arising from its covert operations against the anti-war movement.
The strategy of "Iraqization" seems finished except as a figleaf. The new Iraqi constitution, which damages the interests of Sunnis and women, barely passed amidst widespread accusations of voter fraud. Then came the discovery of the Saddam-style torture chamber operated by Shiite militias under cover of the Iraqi army. The discredited Achmad Chalabi brazenly flirted with high US officials about returning to power. If US and British troops redeploy, it is hard to imagine the Iraqi army standing up against the Iraqi resistance.
Reeling from internal turmoil, scandals and declining poll numbers, the White House has lost its sound bite. When Bush and Cheney accused Democrats of changing their minds, as if they should continue to embrace fabricated evidence, Murtha blasted Cheney as a five-deferment Dick.
The media's humiliating wartime collaboration with the Bush Administration, shown last week by the New York Times' dismissal of Judith Miller, was underscored anew by revelations that Bob Woodward, considered a media "god" according to the Washington Post, had kept from his own editors his secret interviews with White House officials about Joseph Wilson and Valerie Plame. As Nixon once dismissed the Watergate scandal as a "third-rate burglary", Woodward dismissed the current scandal as merely "chatter", lacking an underlying crime, "not one to go to court with" -- the very day before Lewis Libby was indicted. [nyt, nov. 17,05]