Why they didn't wait to bomb Syria

Merrit Kennedy (NPR) reports:
https://www.npr.org/sections/thetwo-way/2018/04/16/602823635/chemical-weapons-inspectors-havent-reached-douma-finger-pointing-has-begun
Inspectors haven't yet been able to access the site of an alleged chemical weapons attack in Syria that prompted a U.S.-led coalition to launch airstrikes against suspected Syrian chemical sites on Friday. And the parties involved are trading blame about why.
The Organisation for the Prohibition of Chemical Weapons said that a team of nine inspectors arrived in Damascus on Saturday, after it was invited by Syria and Russia to investigate the apparent chemical attack just over a week ago on on Douma, a suburb of Damascus that has been held by rebels.
The Director-General of the OPCW, Ahmet Üzümcü, told representatives Monday that team members have met with Syrian officials in Damascus.
But they haven't gotten into Douma, about 11 miles away.
Answer me this: Why didn’t they wait for the inspectors?  Bigger question: Why isn’t the media asking that?
If you remember the start of the Iraq War, the inspectors were inspecting when Bully Boy Bush began bombing.   I don’t know, is this an improvement?  I mean at least they weren’t scrambling to get out before the bombs dropped – like with Iraq.  But why are we not waiting for inspections?
Oh, that’s right: Inspections would most likely prove the claims were false.  Gotta’ bomb before everyone finds out you’re lying.
“TV: Neither humanity nor honesty factor into corporate news ” (Ava and C.I., THE THIRD ESTATE SUNDAY REVIEW):
And that's what you saw from the corporate media.  It wasn't news.  There was John Brennan on MEET THE PRESS.  There was the lack of questioning on all three networks' so-called coverage.  And there was the non-stop promotion of George's Sunday night special pimped as news. Most of all there was David Muir, interrupting the ABC prime time line up on Friday for Donald Trump's we're-bombing-the-hell-out-of-Syria and  then signing off with, "Enjoy the rest of your evening."  Enjoy the rest of your evening?  For years, people have wondered if David was gay or not.  More recently, the concern has been is he a top or a bottom?  After his moment Friday, we think the better question would be is he human or not?


Exactly.  Ava and C.I. cover a great deal in their piece – ABC’s THIS WEEk, NBC’s MEET THE PRESS, CBS’ FACE THE NATION,  CLEARING THE FOG and ON CONTACT WITH CHRIS HEDGES.  It’s a really strong examination of the media.

Monday, April 16, 2018.  Donald Trump leads the bombing of Syria, Iraqis protest while the US media attempts to divert and distract from the real issues.


In a bit of good news for Hayder al-Abadi, they weren't protesting government corruption.  They were instead protesting the US attacks on Syria that US President Donald Trump launched on Friday night.

A little after 9:00 pm EST, Donald appeared on US television to announce, "Today, the nations of Britain, France, and the United States of America have marshaled their righteous power against barbarism and brutality."

Righteous power?  Some would argue there was nothing righteous about it.  As Vijay Prashad pointed out on CLEARING THE FOG, if indeed there were chemical weapons at the spots bombed, what would be the point of bombing them?  Wouldn't that just put the chemicals into the air?


If you were waiting for the US corporate media to address that, you were waiting in vain.  As Ava and I explained  in "TV: Neither humanity nor honesty factor into corporate news," ABC, CBS and NBC all skipped the notion of questions on their so-called public affairs programs on Sunday.  ABC, in fact, was more interested in promoting their Sunday 'news' special -- George Stephanopoulos fawning over James Comey -- than in exploring Syria.

On RT's GOING UNDERGROUND, Afshin Rattansi could -- and did -- wonder, "Whether chemical weapons allegations have become the political weapon of choice to excuse western expansionism?"  But the US corporate media was silenced on this and any other issue of importance.  As Mark Crispin Miller pointed out on Friday's ON CONTACT WITH CHRIS HEDGES, "I would say that the things you hear us talk about the least -- because the press has blacked them out -- are what pose the greatest threat to us."


What couldn't be broadcast on US corporate media could be questioned elsewhere.  SPUTNIK points out:

French Minister of Economy and Finance Bruno Le Maire, who previously served as secretary of state for European affairs, said on Monday that he saw no parallels between the US invasion of Iraq in 2003, which was opposed by Paris at the time, and the strikes carried out on Syria by France and its allies this weekend.
"This is a ridiculous comparison. This situation has nothing to do with the current situation. There was no aggression from Iraq back then…. There was no Iraqi aggression, no Iraqi threat: why would you attack a state that does not threaten you?" Le Maire said on the Europe 1 broadcaster.

The US corporate media may question Donald Trump, may tear him apart daily, but they will never question war.

Wait, as Ava and I point out, they do question it -- they question whether any attack was enough and they fret that any action might make the government of Iran stronger.  That's their way of questioning -- begging for more and more war.


If the corporate media is craven (and it is), the American 'independent' media isn't a whole lot better as evidenced by COMMON DREAMS.  They 'cover' the strikes by running commentary by Juan Cole (born John Cole), the infamous CIA contractor.  Here's John V. Walsh (ANTIWAR.COM):


Cole claims to be a man of the "Left" and he appears with painful frequency on Amy Goodman’s Democracy Now as the reigning "expert" on the war on Libya.  This is deeply troubling – on at least two counts. First, can one be a member of the "Left" and also an advocate for the brutal intervention by the Great Western Powers in the affairs of a small, relatively poor country?  Apparently so, at least in Democracy Now’s version of the "Left."  Second, it appears that Cole’s essential function these days is to convince wavering progressives that the war on Libya is fine and dandy.  But how can such damaged goods as Cole credibly perform this marketing mission so vital to Obama’s war?
Miraculously, Cole got just the rehabilitation he needed to continue with this vital propaganda function when it was disclosed by the New York Times on June 15 that he was the object of a White House inquiry way back in 2005 in Bush times. The source and reason for this leak and the publication of it by the NYT at this time, so many years later, should be of great interest, but they are unknown.   Within a week of the Times piece Cole was accorded a hero’s welcome on Democracy Now, as he appeared with retired CIA agent Glenn Carle who had served 23 years in the clandestine services of the CIA in part as an "interrogator."  Carl had just retired from the CIA at the time of the White House request and was at the time employed at the National Intelligence Council, which authors the National Intelligence Estimate.
It hit this listener like a ton of bricks when it was disclosed in Goodman’s interview that Cole was a long time "consultant" for the CIA, the National Intelligence Council and other agencies.


Yet COMMON DREAMS is publishing him still?  As the late Alexander Cockburn (COUNTERPUNCH) observed in 2011, "On Amy Goodman's Democracy Now one was far more likely to hear CIA-consultant Juan Cole issuing fervent support for the entire intervention than rather any vigorous interviewing of informed sources about what was actually happening on the ground in Libya."

It's offensive to a free exchange for Cole to be included due to his clandestine activities in the past (and currently).  It's also offensive for COMMON DREAMS to publish Cole's piece about Iraqis saying "We've seen this movie and it doesn't end well."

And what Iraqi would say that?

War Hawk Cole would say it.  It's all a big joke to him.

But Iraqis did not take to the streets to protest the bombing of Syria because it reminded them of "a movie."

How patronizing and insulting can the corrupt Juan Cole be -- and don't let COMMON DREAMS off, they elected to post that crap.

For Iraqis who are still living with daily bombings on the ground and with the US-led coalition still dropping bombs on them from the air --  April 6th saw the coalition bombing Tuz, April 8th saw the bombing Rutbah, April 11th saw the bombing Qaim and April 12 saw the bombing of Qaim again (per the US Defense Dept) -- this is not "a movie."  It's insulting for Cole to claim that it is.


US bombed Iraq and killed hundreds of thousands of Iraqis over suspected weapons of mass destruction. US has now bombed Syria over suspected chemical weapons. How many Syrians would get killed?
36 replies54 retweets224 likes

The Iraqi people took to the streets because they've lived with destruction passed off as 'liberation' and they know where this lead.


Hundreds of Iraqi citizens protested on Sunday in central Baghdad against the aistrikes carried out against Syria on Saturday, AlSumaria News reported.
The civilians, according to the report, staged a demonstration in al-Tahrir region in Baghdad against the airstrikes launched by U.S., backed by Britain and France, against Syria.
The protesters raised Iraqi and Syrian flag in solidarity with Syrian people. They also chanted against the U.S. and its allies.
Earlier today, security troops blocked the roads near from Tahrir region and imposed tight measures as the protest was staged.

Stop destroying Syria as you destroyed our country," shouted protesters in Baghdad's Tahrir Square, in reference to the 2003 US-led invasion of Iraq. "No to America, no to the bombardment of Syria," they chanted. yahoo.com/news/us-flags-…
0 replies0 retweets0 likes


NPR adds, "Demonstrators gathered in major cities across Iraq on Sunday to protest U.S.-led airstrikes against Syria in protests called for by Muqtada Sadr, the influential Shiite cleric who led the Mehdi Army that fought U.S. forces after the toppling of Saddam Hussein's regime in 2003.  The demonstrations took place in Baghdad, Basra and Najaf."

US flags burned as Iraqis protest Syria strikes...even Iraq knows that the actions in Syria were not only unjust, but politically motivated. They themselves have experienced the power of US / UK salvation. f24.my/2qre.T via @FRANCE24
0 replies0 retweets0 likes


May 12th, elections are supposed to take place in Iraq.  Ali Jawad (ANADOLU AGENCY) notes, "A total of 24 million Iraqis are eligible to cast their ballots to elect members of parliament, who will in turn elect the Iraqi president and prime minister."  RUDAW adds, "Around 7,000 candidates have registered to stand in the May 12 poll, with 329 parliamentary seats up for grabs."  RUDAW also notes that 60 Christian candidates are competing for the five allotted minority seats.

Campaigning started over the weekend.

On the first official day of campaigning for Iraq’s national elections, a single election poster hangs next to a sign warning of unexploded devices in Mosul’s devastated Old City. 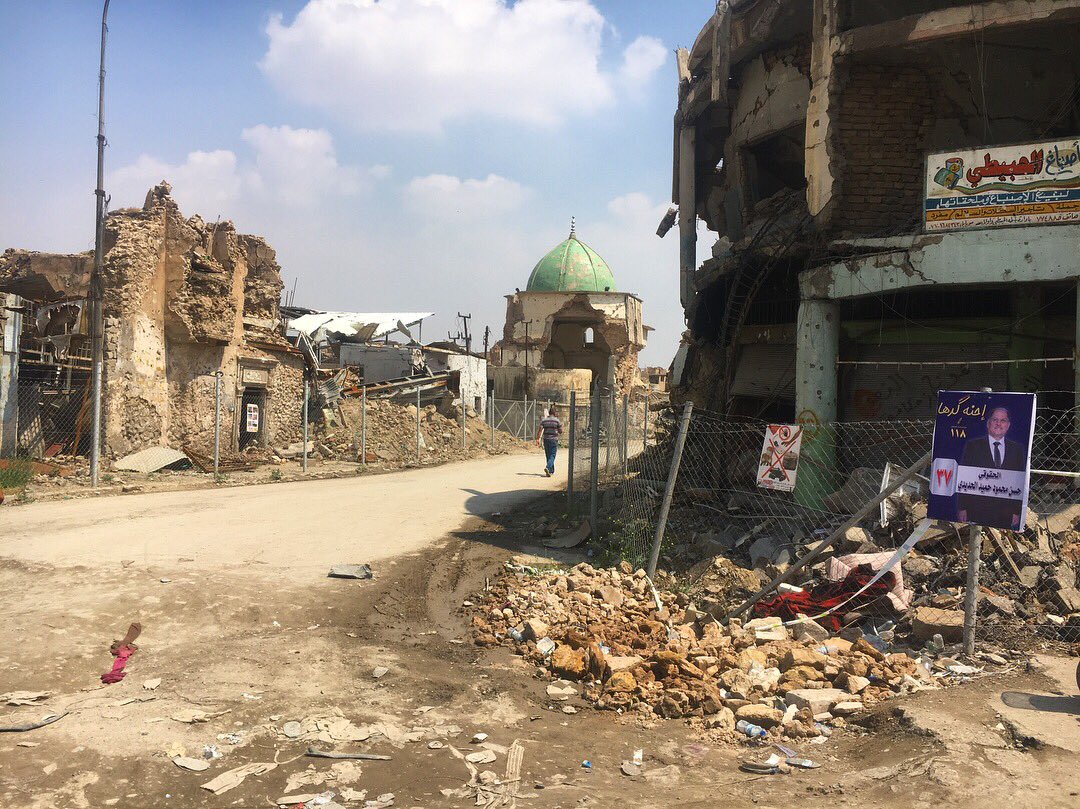 Some in Iraq are not eager to vote.

In #Iraq, citizens have been showing their feelings about the upcoming #elections by ripping up posters of election candidates. Iraqis no longer believe elections will change anything and have grown tired and distrustful of a corrupt, failed political system #tearingcandidatesads pic.twitter.com/N8HMnVgI4y

#Iraq 's #Elections are in less than a month but 2.5 millions Iraqis remain displaced by war, mostly Sunnis & Yazidis. Not clear how many of them will be able to vote. If they can't vote, it will have long-term implication - Not good reliefweb.int/sites/reliefwe… 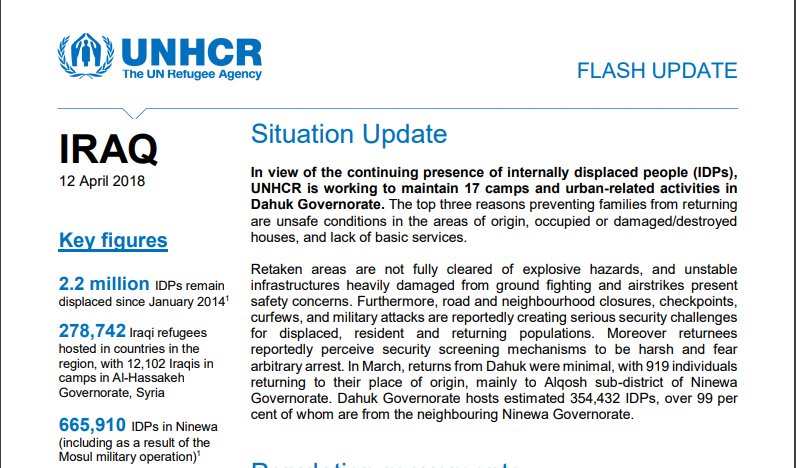