"TV: The Age of New Media?" (Ava and C.I., The Third Estate Sunday Review):
David Duchovny's portrayal of police officer Sam is all dripping, throbbing hard-on, it's all passion and eroticism aided by the best looking partner he's had since Gillian Anderson (The X-Files): Grey Damon as Brian Shafe.


That pretty much sums up NBC's Aquarius, Duchovny's new show.

Jim always reads Ava and C.I.'s latest, reads it out loud to the rest of us.

When he got to the line I quoted, he said, "Very funny.  What are you really putting in there?"

They said, "Those words."

It's perfect and really does describe Duchovny's performance (which is excellent) and also notes/comments on the huge amount of crotch shots throughout the series.

We just finished streaming all 13 episodes (the first one is a two episode one at Hulu and then there are 12 more).

It's a show I'd recommend you catch and if you don't have Hulu you can see it on your TV each Thursday night on NBC.

I hope there's a season two because the show has two main plot lines and it'll be interesting to see how the two come together.

It's a strong cast and it is visually something to see.

Monday, June 1, 2015.  Chaos and violence continue, the refugee crises continues, Haider al-Abadi scapegoats others for his failures, US Secretary of State John Kerry breaks a leg (which may be good news for the conference on how to neutralize the Islamic State), and much more.


In the biggest news out of Iraq today, Alsumaria reports that  Prime Minister Haider al-Abadi went on state TV today to criticize the international coalition for its failure -- its failure -- to keep foreign fighters out of Iraq.

Don't you hate when that happens?

When other countries won't protect your country?

Shouldn't you be able to just sit on your lazy all day and let other countries fight your battles for you?  Well shouldn't you?

Haider was installed by US President Barack Obama.  He's the latest US puppet.

And what a whiny little puppet he is.

He's been put in charge of one of the richest countries in the region and all he can do is Bitch, Moan and Whine.

He can't fix anything because he won't try -- and maybe Barack really doesn't want anything fixed -- remember planned chaos was always the US strategy for Iraq.

But he really needs to grow the hell up.

If only not to be such a joke on the international stage.

But maybe he can't help that?  Maybe he was put in place to play the bumbling fool?


How's Haider dealt with that?

Insulting those who told the truth (including US Secretary of Defense Ash Carter).

Saying they must have their facts wrong.


Iraqis Spring MC notes that Baghdad Provincial Council declared bankruptcy and will be cutting the salaries of over 3,000 employees.

Iraqi Spring MC notes the devastation and hardship that Ramadi refugees are living under.

Alsumaria reports UNICEF is stating Iraq is close to catastrophe and that $500 million is needed just to meet relief needs and over 8 million Iraqi need urgent humanitarian aid.

But instead of focusing on that, the UN has other concerns.  The United Nations 'mission' in Iraq noted Sunday, "The Special Representative of the United Nations Secretary-General for Iraq (SRSG), Mr. Ján Kubiš welcomed the UN General Assembly Resolution on ‘Saving the Cultural Heritage of Iraq’, which was adopted unanimously on Thursday in New York."  A little more focus on the things that actually matter -- human life -- would be appreciated.

Yesterday, Margaret Griffis (Antiwar.com) noted that "at least 4,007 [people] were killed and 897 were wounded" in Iraq in the month of May.

In today's violence, AFP reports, "A huge suicide attack on an Iraqi police base killed at least 37 people on Monday as an operation against the self-styled Islamic State group continued but looked far from retaking Ramadi."  Iraqi Spring MC notes 1 woman was shot dead in Jabour area of Baghdad by government forces who were passing by.  Margaret Griffis (Antiwar.com) counts 165 violent deaths across Iraq today.  Dropping back to Sunday, government shelling left 3 children and 8 adult civilians dead in Falluja with twenty-one more people injured.

In August of 2014, Nouri was out as prime minister and Haider al-Abadi was in.

September 13, 2014, he declared these crimes against humanity were over, that there would be no more bombing of the civilian population in Falluja.  September 14, 2014, the Iraqi military continued its bombings.  And they've continued every day since.

You're not pulling the nation together when you're lying.  You're not bringing Sunnis into the process when they see you continue the crimes against the Sunnis in Falluja that began under Nouri.


June 19th, Barack declared the only answer to Iraq's crises was a political solution.

That's what the State Dept and envoys are supposed to be working towards.

What they were supposed to be working towards.

It's a year later this month.


QUESTION: (In progress) the Coalition’s campaign (inaudible) recent loss, say, of Ramadi, and indeed, of Palmyra.


GEN ALLEN: Let me – let me put it in the context of where we’ve come from, I think, to give you a sense of where hopefully we will go. We’re about nine months into the organization of the Coalition. It didn’t exist even this time last year, and we’re coming up on the one-year acknowledgement or the anniversary of the events in northwest Iraq. And in a relatively short period of time, 62 countries and organizations came together ultimately to deal with this threat of Daesh – the Arabic acronym.

In that time, we have seen a significant element within the Coalition contribute military capacity both in terms of air power, trainers, the trainers in the context of building the capabilities of the Iraqi Security Forces overall, providing camps and trainers for the train and equip program with respect to Syria. We’ve had elements within the Coalition volunteer and organize to provide for assistance to the liberated populations as the campaign unfolds. That stabilization effort is going to be vital. Other members of the Coalition are going to support the recovery and the employment of the Sunni Iraqi police in the Sunni provinces as they are liberated. That’s a lot of work in the space of nine months.


Allow me to provide some context for Allen.  (A) He now works for the State Dept and all he's described is what DoD should be doing.  (B) Political solutions need coaxing and they need working.  Allen and his roll dog Brett McGurk (also with the State Dept) have failed at everything.

But the only way that Brett knows to counter the Islamic State is non-diplomatically.

John Kerry won't be participating because the 70-plus-year-old foolishly decided he'd bicycle in France and broke his leg.


The Secretary is in good spirits and he is en route back to Boston as we speak for treatment for his broken leg. His doctor, Dr. Dennis Burke, is accompanying the Secretary to Boston to monitor his condition and ensure he remains comfortable and will be treating him once he’s back in Boston at Massachusetts General Hospital.
The Secretary’s made a number of calls to his counterparts today, including to the French foreign minister and the Spanish foreign minister to personally, with the Spanish, convey his deep regret in not being able to travel to Madrid for our bilateral meetings that we had scheduled and also to Foreign Minister Fabius, of course, expressing his regret that we won’t be at – he won’t be at the anti-ISIL meeting tomorrow. He will, though, be calling – or be remotely participating in the anti-ISIL meeting. When we have more information about that we will get it to folks. He also has made a number of calls to White House and State Department officials, including speaking with the President.


Well at least the broken leg gives John (yet) another excuse for not working on diplomacy or towards a political solution for Iraq.

John's broken leg might be the best thing for the anti-ISIL meeting.  AP reports that Lauren Fabius, the Foreign Minister of France, has stated there must be a sense that the Iraqi "government is inclusive" to combat the Islamic State effectively.

Maybe the inability to do anything to work towards that  political solution is responsible -- even in part -- for the public's distaste for Barack's plan or 'plan'?

CNN Politics ‏@CNNPolitics 2h2 hours ago
The #ISIS campaign is as unpopular as the Iraq offensive before the 2007 surge http://cnn.it/1FQj0FR 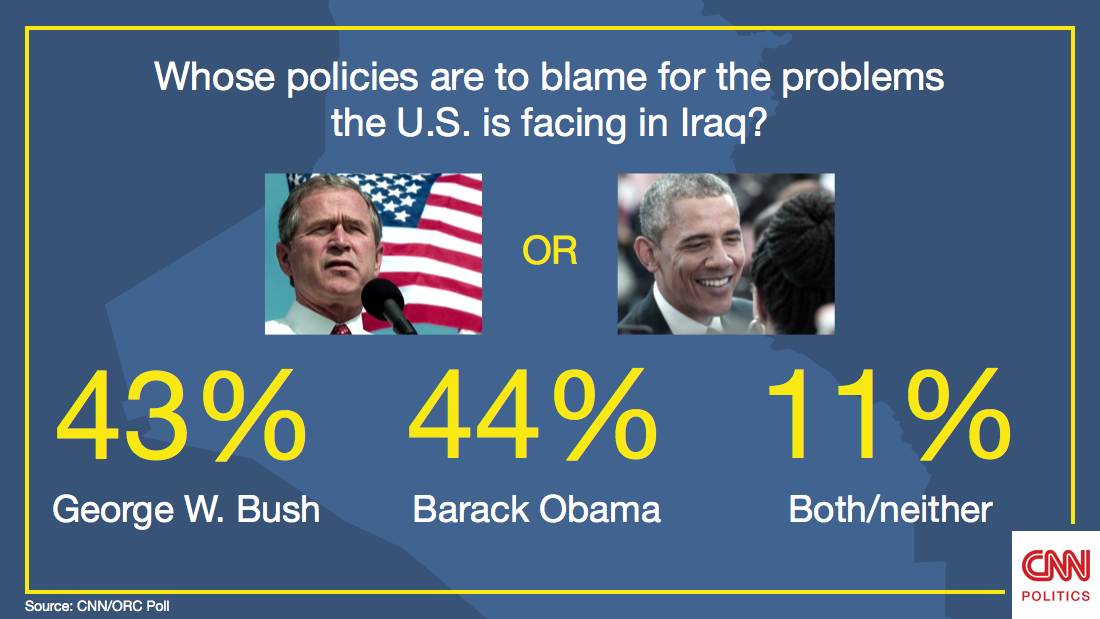 The keynote of the Petraeus approach today is as it always was - the need for the political and military aspects of strategy to march closely in step.
"You cannot deal with an industrial-strength extremist problem just with force of arms," he said. "You have to have that political component as well."
Political change has to start at the top. Above all, Gen Petraeus says, "the Sunni Arabs have to be given incentives to support the new Iraq rather than to oppose it".


That's what Barack was supposed to have been pursuing -- by his own words -- for a year now.  But it hasn't happened.

Or have they all spent too long playing soldiers (from a very safe distance) and too little time doing their actual jobs?

The best chance of quickly responding to the Islamic State would be to get weapons and training directly into the hands of Sunni tribal fighters in Anbar. But the Shiite-led central government, which wants to control the weapons, has resisted that, just as it has resisted integrating those Sunni units into a provincial-based, government-paid national guard. It has instead relied increasingly on Shiite-based militia, some backed by Iran, to fight against ISIS, thus worsening the country’s sectarian divisions and expanding Iran’s influence. Given the urgent threat, the Americans should consider working more directly with the Sunni tribes if Baghdad continues to refuse.


It's a shame that the editorial board was silent when Congress was considering this in April.  Remember that?

Various Shi'ite leaders (not all) were threatening harm to the United States because the Congress was considering directly arming the Kurds and the Sunnis?

And this was under reported or it was ignored.


The press did have time to lie and call it a Republican proposal despite it passing out of Committee on a huge bi-partisan vote.

Various outlets acted as if the Congress was proposing something extreme and illegal.  They rushed to distort what the bill said, what the bill would mean and who supported it.

Now events have made it even more obvious how much the bill is needed.