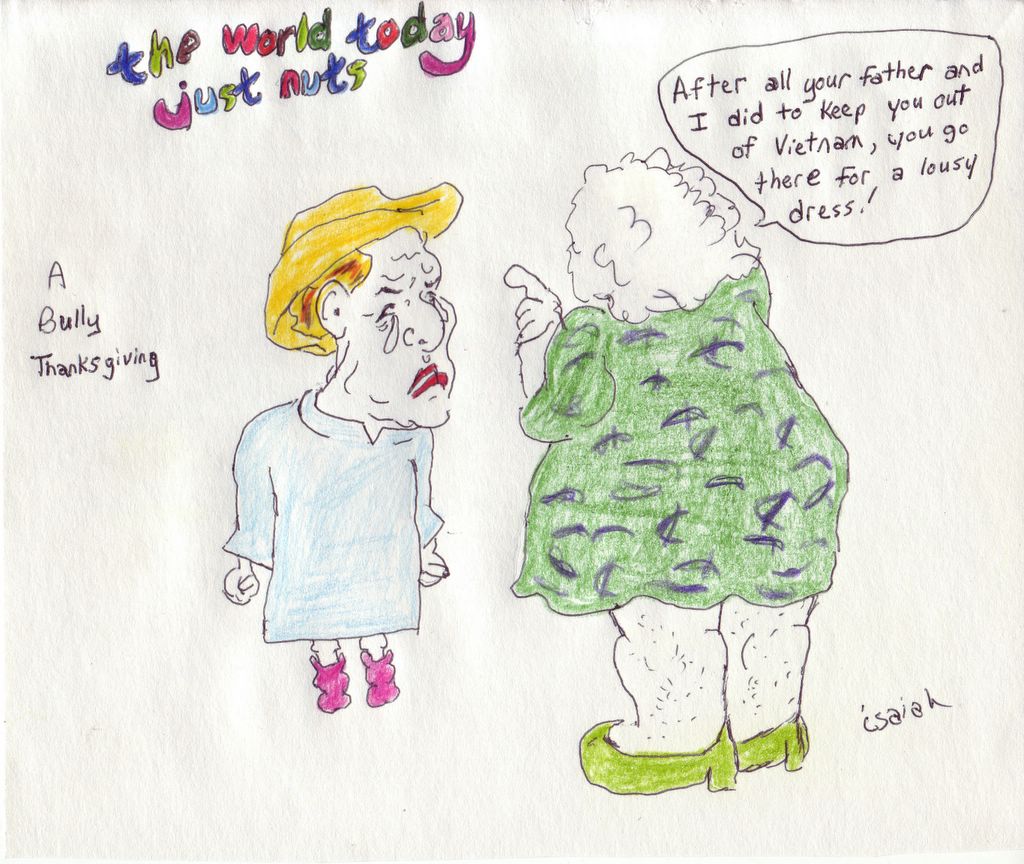 To the left is Isaiah's "The World Today Just Nuts 'A Bully Thanksgiving'" which went up today. My Thanksgiving was better than the one depicted by Isaiah.

However, it was long. When Mike and I started dating, the only worry I had was Trina. I get along with Trina and think she's great but there's a world of difference between being a friend to her and family and dating her son. Fortunately, she wasn't bothered by the relationship or by the age difference between Mike and myself.

Last year, I spent Thanksgiving with them. Mike and I weren't in a relationship then. That should have registered but it honestly didn't until today.

That's not to say it was a bad Thanksgiving. It wasn't. Everyone was nice but there is a world of difference between attending as a friend and attending as the woman seeing Mike.

There was a whole new level of curiousity. It was like being under a microscope. At one point, I excused myself and placed an emergency call to C.I. who gave me a much needed pep talk. When I went back inside, Trina had sensed what was going on and had some sort of talk. The rest of the day went much smoother.

I want to stress that no one was ugly, mean or rude. It was more of an intense curiousity. I felt like every word I uttered was being carefully weighed.

Since I haven't dated anyone Mike's age since I was, in fact, Mike's age, I'd forgotten that feeling. The scrutiny stems from the fact that they love him and are very protective of him. When I was just a friend, it was different. For the first half of Thursday, I felt like I was auditioning repeatedly.

I'm sure similar scenes played across the nation. For that reason, I thought I'd write about it this morning. I intended to write Thursday (it's early Friday) but there was no time. I'd love to talk about what happened in the world today but I have no idea. While under the microscope, I was aware of very little other than the fact that I was being intensely studied. After that period ended, I was pretty much exhausted.

But, if this happened to you, as my very wise friend pointed out, it only happens once.

Those are my thoughts for the night/morning.
Posted by Elaine at 1:22 AM